Rod Beck was a menacing sight on the mound, with a bushy
mustache and a searing stare that intimidated batters throughout
his 13-year career as one of baseball's best closers.

Yet his friends in the game knew Beck as a hardworking teammate
and a jovial character whose early death saddened players all
around the major leagues.

Beck, an All-Star relief pitcher who earned 286 career saves,
was found dead in his home Saturday. He was 38.

"He was a great guy -- always happy, always picking guys up,"
said Giants outfielder Ryan Klesko, who played with Beck in San
Diego. "I know he went through some tough times in the last couple
of years, and it just crushes you."

Beck was discovered by police officers responding to a call to
his home in suburban Phoenix, police department spokesman Andy Hill
said Sunday. Foul play is not suspected, though the cause of death
might not be known for several days.

Beck is survived by his wife, Stacey, and two daughters, 13-year-old Kayla and 12-year-old Kelsey. 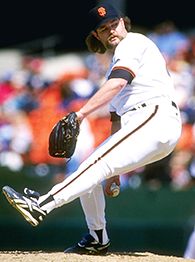 With unruly hair framing his piercing eyes and an aggressive arm
swing before delivering a pitch, the outgoing right-hander was a
colorful baseball personality and a three-time All-Star. He spent
the first seven of his 13 big league seasons with the San Francisco Giants.

Beck was popular with teammates, fans and reporters, but battled
personal demons late in his life. He abruptly left the San Diego
Padres for a two-month stint in rehabilitation during his final
season in 2004.

"He was having some problems, and I just knew he went into
rehab and joined us later that year," said Giants manager Bruce
Bochy, the Padres' manager at the time. "It's so sad when you see
healthy players go at such a young age. This is a bad day in
baseball to lose a guy who did so much for the game."

Drehs: A man of the people

Rod Beck was the toast of Des Moines when he played for the Cubs' Triple-A team, wrote Wayne Drehs in 2003. Story

While working his way back to the majors in 2003, Beck pitched
for the Triple-A Iowa Cubs and famously lived in his Winnebago
parked just beyond the outfield fence. Delighted fans would drop by
for autographs and stay for a beer -- until the Padres called.

"You wanted him to have the ball at the end of the game," said
Pirates outfielder Xavier Nady, who played with Beck in San Diego
in 2003, when he picked up 20 saves and three wins in an incredible 2½-month stretch.

Beck was revered by teammates for demanding the ball in the ninth inning. To that end, according to the Chicago Tribune, the license plates on one of the several cars he owned read "9 IS MINE."

"He was very good at what he did," Nady said. "He'll always be respected for what he did as a closer. He was a guy who was fun to be around, and made other guys smile."

Beck set the Giants' single-season record with 48 saves in 1993.
He was on the mound when San Francisco clinched the NL West title
in 1997, and was the Giants' career saves leader with 199 until
Robb Nen passed him in 2002.