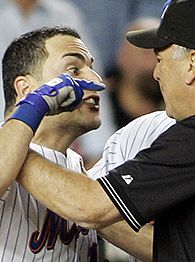 Lo Duca appealed the penalty and cannot be disciplined until
after a hearing is held. He started Monday against St. Louis and went 0-for-4.

"Hopefully, I can get it down to one game," he said. "I
expected a suspension. Maybe not two days."

Lo Duca said it was the first suspension of his career. He said
he wasn't exactly sure how the appeal process worked, and wanted to
play this weekend against Philadelphia.

"Obviously, I overreacted," he said. "I called my ex-wife. I
hope my daughter wasn't watching."

Lo Duca was ejected in the sixth inning of the Mets' 1-0 victory
over Oakland on Saturday night after a called strike made the count
against him 0-2.

His eyes bulging, Lo Duca was restrained by Mets manager Willie
Randolph. When Lo Duca walked to the dugout, he threw his helmet,
bat and elbow guard toward first base. Once he reached the bench,
Lo Duca tossed his shin guards into foul territory and his chest
protector, which got hung up on the dugout railing.

"I didn't realize my eyes looked like that," he said.

Lo Duca said he's always gotten along with Hudson, going back to
their days in the minors. Lo Duca said that when he saw Hudson the
next day, he told the umpire, "My bad, I apologize."

Backup Ramon Castro caught the rest of the game after Lo Duca
was ejected. Randolph later said that reserve infielder Jose
Valentin would have been the emergency catcher if Castro had to
leave.

"Maybe I would throw a guy out at second base and change
positions," Valentin kidded Monday. "Let's hope it doesn't
happen."