WASHINGTON -- Sports, not politics, will be Baseball Hall of
Famer Cal Ripken Jr.'s emphasis in his new role as a special envoy
for the State Department. 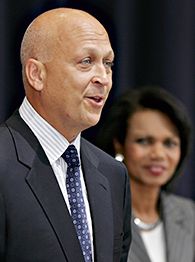 "This isn't a political statement for me, necessarily," Ripken
said Monday after Secretary of State Condoleezza Rice formally
announced his appointment. "This is about the kids and planning
baseball and using baseball for good reasons."

Ripken, who set Major League Baseball's record for consecutive games
played -- 2,632 games in a row, earning him the nickname "Iron
Man" -- said he was ready for the task, which will take him first
to China, where he will offer baseball clinics and visit schools, at the end of October.

Ripken, a Baltimore Oriole for 21 seasons and the first commissioner of President Bush's White House tee-ball
league for youngsters, said he would promote teamwork and cross-cultural communication.

"This is about using baseball for good reasons," he said. "I know it is not probably going to be easy in some
environments. Sport, baseball in particular, is very magical. It can go across cultural lines."

Rice, a well-known sports fan, introduced Ripken as a wholesome
symbol of America who represents "our aspirations to be a better
nation and to help build a better world."

Rice paid tribute to Ripken's record-breaking streak and joked
that she expected him to keep up that kind of perseverance, saying,
"Cal, I assume that whenever I call you, you're going to be hard
at work for America."

Ripken noted he already was on another winning streak.

Ripken is the second "special sports envoy." Figure skating
star Michelle Kwan is the other.

The job is an unpaid position for which the government pays only
travel expenses.

Ripken, who retired in 2001, laughed when asked about money.

"I was looking for a baseball salary," he said.

"We don't have those in government," chuckled Karen Hughes,
the under secretary of state for public affairs with whom Ripken
will be working most closely.

A group of Chinese baseball coaches, who are currently in
the United States training at Ripken's Academy in Aberdeen,
Md., attended the news conference.