NEW YORK -- His speed and spunk made him a Hall of Famer.

Popular as a player and beloved as a broadcaster, the New York Yankees shortstop during their dynasty years of the 1940s and 1950s
died Monday night. "The Scooter" was 89.

Rizzuto had pneumonia and died in his sleep at a nursing home in
West Orange, N.J., daughter Patricia Rizzuto said Tuesday. He had
been in declining health for several years.

"I guess heaven must have needed a shortstop," Yankees owner
George Steinbrenner said in a statement. "He epitomized the Yankee
spirit -- gritty and hard charging -- and he wore the pinstripes
proudly."

Rizzuto was the oldest living Hall of Famer and his Cooperstown
plaque noted how he "overcame diminutive size." At 5-foot-6, he
played over his head, winning seven World Series titles and an AL
MVP award and becoming a five-time All-Star.

""Phil was a gem, one of the greatest people I ever knew. A dear
friend and great teammate," said Hall of Famer Yogi Berra,
who frequently visited Rizzuto in his later years. "When I first came up to the Yankees, he was like a big --
actually, small -- brother to me." 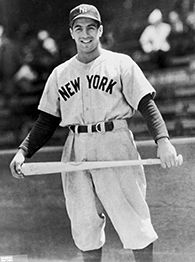 Rizzuto's No. 10 was retired by baseball's most storied team,
and the club will wear his number on its left sleeves for the rest
of the season.

The flags at Yankee Stadium were lowered to half-staff before
Tuesday night's game against Baltimore and a bouquet was placed by
Rizzuto's plaque at Monument Park.

Public address announcer Bob Sheppard detailed some of Rizzuto's
accomplishments before the team observed a pregame moment of
silence. His number was painted on the grass in front of each
dugout and marquees outside the stadium said "Phil Rizzuto
1917-2007".

"Scooter, we will miss you," Sheppard said as a video tribute
aired on the scoreboard.

New York also showed highlights from Rizzuto's playing career
and part of his Hall of Fame induction speech before the bottom
half of the first inning.

Yet it was after he moved into the broadcast booth that Rizzuto
reached a new level celebrity with another generation of Yankees fans.

Rizzuto delighted TV and radio listeners for four decades, his
voice dripping with his native Brooklyn. He loved his favorite
catch-phrase -- exclaiming "Holy cow!" when Roger Maris hit his
61st home run -- and often shouted "What a huckleberry!"

In an age of broadcasters who spout statistics, Rizzuto was a
storyteller. He liked to talk about things such as his fear of
lightning, the style of an umpire's shoes or even the prospect of
outfielder Dave Winfield as a candidate for president.

"He didn't try to act like an announcer," Hall of Fame
teammate Whitey Ford said. "He just said what he thought. It added
fun to the game."

Rizzuto liked to acknowledge birthdays and anniversaries, read
notes from fans, talk about his favorite place to get a cannoli and
send messages to old cronies. Once he noticed old teammate Bobby
Brown -- then the American League president -- sitting in a box seat
and hollered down, trying to get his attention.

"He would keep getting in trouble with WPIX for announcing
birthdays and anniversaries," Patricia Rizzuto, recalled.

And if Rizzuto missed a play, he would scribble "ww" in his
scorecard box score. That, he said, meant "wasn't watching." 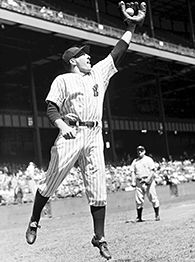 His fans and colleagues never minded. Because with a simple
shout of "Hey, White!" to longtime broadcasting partner Bill
White, it was time for another tale.

Rizzuto's popularity was such that at a recent auction a Rizzuto
cap embedded with a wad of chewing gum sold for more than $8,000.
In the New York area, Rizzuto's antics became a staple for TV ads.
Nonbaseball fans got to know him, too, when his voice appeared on
Meat Loaf's 1977 rock smash "Paradise by the Dashboard Light."

"Phil was a unique figure who exemplified the joy of our game
to millions of fans," commissioner Bud Selig said.

He liked to share that joy. St. Joseph's School for the Blind in
Jersey City, was a favorite cause of Rizzuto's, and his daughter
asked that any donations be directed there.

Edward J. Lucas, a former student at the school, met Rizzuto
soon after losing his sight at age 12 when a line drive struck him
between the eyes. The accident happened on Oct. 3, 1951, when Lucas
went outside to play ball after watching Bobby Thomson hit the
"Shot Heard 'Round the World" to win the National League pennant
for the New York Giants.

"He has been a friend every since," said Lucas, now 68, a
baseball radio reporter. "He's been here and helped us out
tremendously."

Rizzuto also introduced Lucas to the woman he would eventually
marry. The ceremony was last year at home plate at Yankee Stadium.

"He may be short in stature," Lucas said. "but his heart was
bigger than all of Yankee Stadium."

Rizzuto was a flashy player who could always be counted on for a
perfect bunt, a nice slide or a diving catch in a lineup better
known for its cornerstone sluggers. He played 13 seasons alongside
the likes of Joe DiMaggio and Mickey Mantle in a career interrupted
by Navy service in World War II.

Often overshadowed by Hall of Fame teammates, it made sense that
Rizzuto was the first "mystery guest" on the old game show
"What's My Line?" in 1950.

A leadoff man with quick feet that earned him his nickname,
Rizzuto was a staple on the Yankees teams that won 11 pennants and
nine World Series between 1941 and 1956.

"He was a Yankee all the way," Indians Hall of Famer Bob
Feller said. "He knew the fundamentals of the game and he got 100
percent out of his ability. He played it hard and he played it
fair."

He led all AL shortstops in double plays three times and had a
career batting average of .273. He played errorless ball in 21
consecutive World Series games and DiMaggio said the shortstop
"held the team together."

Long after his playing career, Rizzuto could often be found
talking ball in the Yankees clubhouse. He especially enjoyed his
visits with Jeter.

"Mr. Rizzuto serves as the ultimate reminder that physical
stature has little bearing on the size of a person's heart," Jeter
said. "Nothing was ever given to Phil, and he used every ounce of
his ability to become one of the greatest Yankees to ever wear this
uniform."

On Phil Rizzuto Day at Yankee Stadium in 1985, the team gave him
a fitting present: a cow wearing a halo.

The cow knocked Rizzuto over and, of course, he shouted, "Holy
cow!"

"That thing really hurt," he said. "That big thing stepped
right on my shoe and pushed me backwards, like a karate move."

Rizzuto was passed over for the Hall of Fame 15 times by the
writers and 11 times by the Veterans Committee. Finally, a
persuasive speech by Ted Williams pushed Rizzuto into Cooperstown
in 1994.

"If we'd had Rizzuto in Boston, we'd have won all those
pennants instead of New York," Williams often said.

"I never thought I deserved to be in the Hall of Fame,"
Rizzuto once said. "The Hall of Fame is for the big guys, pitchers
with 100 mph fastballs and hitters who sock homers and drive in a
lot of runs. That's the way it always has been and the way it
should be."

The flag at Cooperstown was lowered to half-staff and a laurel
was placed around his plaque, as is custom when Hall of Famers die.
With Rizzuto's death, executive Lee MacPhail, 89, became the oldest
living Hall member. Among the eldest of living Hall of Famers are Bobby Doerr and Feller (born in 1918), Monte Irvin (1919) and Stan Musial (1920).

A private, family funeral is planned. The family is working with
the Yankees on a memorial to be held at Yankee Stadium, Patricia
Rizzuto said.