SAN FRANCISCO -- The fate of Barry Bonds' record-breaking
home-run ball is now in the public's hands after its buyer
announced Monday he was taking votes on whether to give the ball to
the Hall of Fame, brand it with an asterisk or blast it into space. 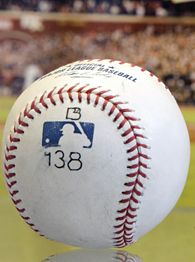 Fashion designer Marc Ecko revealed himself as Saturday's
winning bidder in the online auction for the ball that Bonds hit
last month to break Hank Aaron's all-time home-run record of 755.
The final selling price for No. 756 was $752,467, well above most
predictions.

Ecko had not even taken possession of the ball before posting a
Web site that lets visitors vote on which of the three outcomes
they think the ball most deserves. He said he plans to announce the
final tally after voting ends Sept. 25.

"I bought this baseball to democratize the debate over what to
do with it," Ecko wrote on the Web site. "The idea that some of
the best athletes in the country are forced to decide between being
competitive and staying natural is troubling."

Ecko, 35, is known for his pop culture pranks, including an
infamous Internet video that showed him apparently infiltrating an
airport tarmac and spray-painting graffiti on Air Force One. The
incident turned out to be a hoax.

But the auction house which handled the sale confirmed that Ecko
is indeed the ball's buyer.

"This transaction is happening and is going to be done by the
end of the day," David Kohler, president of SCP Auctions, said
Monday.

Kohler called Ecko's decision "brilliant" and said he had
already visited the Web site and voted to send the ball to the
National Baseball Hall of Fame in Cooperstown, N.Y.

Matt Murphy, a 21-year-old student and construction supervisor
from New York, emerged from a scuffle with the ball on Aug. 7. He
decided to sell it, he said, because he couldn't afford the tax
bill that would result from holding onto the ball.

Some tax experts said Murphy would have owed hundreds of
thousands of dollars in taxes based on a reasonable estimate of the
ball's value even if he had never sold it. He may also have faced
capital gains taxes as the ball gained value.

"This either makes him a lunatic or a genius, one of those
two," Murphy said when told of Ecko's stunt. "I'm leaning toward
genius."

Murphy said he planned to vote to send the ball to Cooperstown.

Ecko himself said he voted to brand the ball with an asterisk, a
reference to the belief of some Bonds detractors that the Giants
slugger's record is tainted by his alleged use of performance
enhancing substances. Bonds has denied knowingly using
performance-enhancing drugs.

But Ecko said what really interests him is seeing what happens
when an "American Idol" approach comes together with a serious
public debate over drugs in sports.

"My vote really doesn't matter," said Ecko, who identifies
himself as a New York Yankees fan. "The American public will tell
us what to do with it."