NEW YORK -- The first inning was fresh, still filled with hope that somehow this team could crawl out of its comatose state and return to its winning ways. Then, before the inning was even over, the Mets' worst fears appeared in right field, glaring at them in bright orange numbers on the scoreboard: PHI 1, ATL 0.

The bad news -- courtesy of the Phillies -- kept at a steady pace Thursday night, as did the Mets' uninspired play. They lost 3-0 to the Cardinals, then lost their division lead for the first time since May 15, a span of 136 days, after the Phillies beat Atlanta. 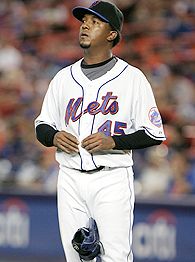 Now, with three games left to play in this 162-game season, the Mets are in jeopardy of missing the playoffs. They are tied with the Phillies atop the National League East, and it is the defending division champions who appear to have little confidence and a lot of questions.

"When I first got here, I was really excited," said Pedro Martinez, who struck out eight over a season-high seven innings but still lost. "Right now, I'm a little worried about how things have developed."

He is not alone. While the players wouldn't acknowledge the scoreboard watching, it was impossible to miss. The results could be seen immediately, and all you had to do was look at the field to witness how blowing a seven-game lead in two weeks manifests itself.

As the Phillies ran up their score -- 4-0 by the end of the first inning and 6-0 by the close of the third -- the Mets were sputtering. Luis Castillo flubbed an easy double play in the first for an error, and the miscues (however minute) continued. Paul Lo Duca didn't even attempt a throw in the third when Ryan Ludwick stole second base after the ball fell out of his hand during the transfer.

By then, the Cardinals had built a 3-0 lead, one that seemed surmountable at the time. But the malaise only continued. Cardinals right-hander Joel Pineiro, who was once designated for assignment this season, dominated the Mets, giving up three hits in eight innings while allowing only one runner past first base all night, when David Wright doubled in the first inning.

How lifeless were the Mets? Pineiro and closer Jason Isringhausen combined to retire 13 straight, with Isringhausen needing just nine pitches for the ninth inning.

"That usually doesn't happen," Isringhausen said over loud music in the visitors' clubhouse. "Not here, anyway. It must be the full moon."

Before the game, one veteran Mets player said the losing -- especially after three straight losses to the Nationals, a team loaded with four-A talent -- was taxing.

"I'm not getting much sleep," he said. "It's worse than having a two-month-old infant in the room, and you're trying to get sleep. We've got to try and win some ballgames."

To do that, the Mets needed Martinez, pitching with a surgically repaired but diminished shoulder, to be their stopper and savior. Neither happened, though Martinez did all he could to keep his team in the game, giving up three runs and providing the bullpen some rest.

Entering the game, the Mets' bullpen ERA in September was 5.34, the fifth-worst in the NL, according to the Elias Sports Bureau. The other four teams with worse ERAs have all been eliminated from postseason contention. Closer Billy Wagner acknowledged before the game that it's been one of the team's recent downfalls.

"There's no such thing as a fan of our bullpen," Wagner said. "We haven't earned that, and we know it."

We're too good of a team to go down like this. I came here to have fun and win a championship. Unfortunately, I haven't been having too much fun the past couple of weeks.

One NL scout warned that New York's pitching "is in shambles" -- and it's the offense that has remained consistent and potent. The irony is that on this night, the bats went quiet.

While the Mets gave full credit to Pineiro for throwing a good game, and rightfully so, they privately acknowledged that they appear to be a shell of their once-dominant selves.

"Wish I was where they were," Troy Percival, who came out of retirement to pitch this season, said. "Three games left to play to get into the playoffs? I'd take that."

So would most players. But not these Mets. They are not taking any of this well. Many players left quickly after the game, and the ones who remained seemed to be at a loss for explanations.

"We're too good of a team to go down like this," said Moises Alou, whose 30-game hitting streak was snapped. "I came here to have fun and win a championship. Unfortunately, I haven't been having too much fun the past couple of weeks."

As a pack of reporters gathered around Wagner after the game, manager Willie Randolph, sounding a bit desperate, walked by and uttered a few words to no one in particular: "We're gonna win this thing, we're gonna win it."

The question is, how will it happen, and who will step up to do it? No one seemed to have those answers Thursday night. And as all the Mets are very aware, there isn't much time to find them.

Amy K. Nelson is a staff writer for ESPN.com.