ST. LOUIS -- After reviving his career as a starting
pitcher, Joel Pineiro briefly considered testing the free-agent
market. He ended up staying in the same place, with the team that
gave him another opportunity. 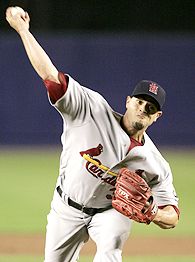 Pineiro agreed to a $13 million, two-year contract with St.
Louis on Monday after thriving with the Cardinals down the stretch.

"St. Louis gave me that chance," Pineiro said. "They took
that chance on me. That meant a lot to me."

"We felt very strongly at the time of the trade that Joel had
the ability to improve our starting rotation once he had time to
condition himself for that role," interim general manager John
Mozeliak said. "We are extremely pleased to have re-signed Joel
and project him to be a steady performer for us, much like he did
down the stretch this past season."

Pineiro is the third pitcher retained since the end of the
season, with the Cardinals also picking up an $8 million option on
closer Jason Isringhausen and re-signing right-hander
Russ Springer.

Pineiro began the year in Boston's bullpen, making 31 relief
appearances, and made two starts for Triple-A Pawtucket in late
July before the Cardinals acquired him along with cash for a minor
leaguer. He was pitching coach Dave Duncan's latest reclamation
project with a 3.96 ERA the last two months, and closed out his
surge by helping to knock the New York Mets out of the postseason
in a 3-0 victory on Sept. 27.

The 29-year-old worked into the sixth inning in seven of his
starts, and the team was 7-4 when he pitched. He credited Duncan,
who also has revived the likes of Jeff Weaver and Woody Williams in
recent seasons, with reworking his delivery.

"The biggest key was they were really interested in me and I
was interested in them," Pineiro said. "My family loved it here,
and now I think I can help this ballclub from the first day instead
of the middle of the season."

Pineiro, Adam Wainwright and Braden Looper are expected to be in
the Cardinals rotation next year but the other two spots are in
flux. Mark Mulder may not be ready for Opening Day after a second
shoulder operation in September and ace Chris Carpenter won't be
back until after the All-Star break following reconstructive elbow
surgery.

It's also unclear who will manage St. Louis next season. Tony La
Russa was deliberating whether to return for a 13th season while
awaiting the results of a GM search to replace Walt Jocketty, who
was dismissed last week.

Team spokesman Brian Bartow said Mozeliak's next order of
business will be re-signing shortstop David Eckstein, the 2006
World Series MVP who can be a free agent.

"I could never see him leaving," Pineiro said. "Hopefully he
will still be a part of this team.

"A lot of players are coming back and if everybody stays
healthy we'll have some fun."