By Steve Berthiaume
ESPN
Archive
Will Stephen Strasburg wind up as the next Bob Gibson or David Clyde, or is there too much Sidd Finch in the equation at this point to get an accurate reading? You will get no speculation here. Exactly what is Stephen Strasburg right now? Here's the report from the phenom himself, after his recent visit to our "Baseball Tonight" studios. Strasburg throws four basic pitches.
[+] Enlarge 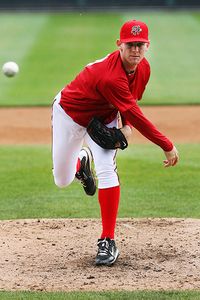 Matthew O'Haren/Icon SMIStephen Strasburg, the No. 1 overall pick in last year's draft by the Nationals, is 2-0 with a 0.73 ERA in three starts in Double-A.
1. "I've got a standard four-seam fastball," Strasburg told us. That's if you consider a fastball right around 100 mph "standard." A big key to Strasburg's repertoire is his next pitch. 2. "I throw kind of like a slider/curveball hybrid. I take a little bit off, it comes more out like a curveball. I definitely try and overpower it down in the zone, more like a slider," said Strasburg. It's his primary breaking pitch and when I asked him if he considered it a slurve, he said yes, but the movement can vary depending on how much velocity he puts behind it each time. In fact, one minor league umpire supervisor told Baseball Tonight's Eduardo Perez that some of the minor league umps admit to missing calls on Strasburg's breaking pitch because of it's unusual and varied movement. "I guess that's a good thing, I guess it's moving a lot," Strasburg joked. It's a pitch he's thrown since he was a San Diego State freshman and it's his most trusted secondary pitch off his fastball. "That's my pitch," Strasburg told us. "I'm really confident throwing that any time in the count." 3. "I've got a two-seam changeup. I like to throw that down in the zone," said Strasburg. Here's another key: The seams on a college baseball are bigger than those on a professional baseball, and Strasburg told me he's been getting more movement and sink on his changeup as a pro than he did as a collegian. "My changeup has been really good ever since I've been playing pro ball. With these smaller seams, it's just gotten better." 4. "I've got a sinker that I like to mix in there, too. It's kind of like a one-seamer. That's kind of an easy ground-ball out, right there," said Strasburg. So to summarize, Strasburg's got a killer breaking pitch that he trusts completely and a sinker he says he's been throwing a lot lately for easy ground-ball outs, and a guy who throws near triple digits on the radar gun now has a changeup that is better than ever. Wait, it gets better. Now for the delivery … From the stretch position at San Diego State, Strasburg says he was right around one second with his delivery to the plate. "In college, I was almost just a straight slide step every time," he said. As a college pitcher, Strasburg was able to pitch that way with men on base without diluting the movement on his breaking ball or suffering any real loss in velocity. "All my stuff was still there and it virtually eliminated the running game," he said. As a professional, the Nationals actually want Strasburg to slow down to about 1.3 seconds to the plate. The goal is to help generate additional power and command with his push-off leg. "They have me starting out with more of a load on my back side and then getting going," Strasburg said. "It helps me keep the angle on my fastball a lot better." Strasburg says he's been comfortable with these adjustments and the velocity on his pitches is "pretty much the same" from the windup to the stretch. We've covered pitches and delivery, but what about location? Thanks to aluminum bats, some college coaches insist their pitchers live only on the outside corner. As a result, a college pitcher could spend years throwing nothing but fastballs and sliders down and away but then struggle trying to pitch inside at the professional level. Strasburg told me that because collegiate hitters simply couldn't turn around on his fastball anyway, he's been coming inside to hitters for quite some time and hasn't had an issue establishing ownership of the inside part of the plate as a pro. Here's a final thought. Strasburg paid us a visit on the night of the first round of the NFL draft, as we saw lots of televised shots of first-round football picks surrounded by entourages and blinged up with diamond watches the size of manhole covers. That's fine; it's their moment and they should enjoy it as they see fit. Strasburg, however, arrived only with his wife, Rachel, after they drove themselves, in their own car, over to our "Baseball Tonight" studios in Bristol, Conn., following Harrisburg's game at New Britain. No posse, no limo, no agents, no PR reps. Strasburg is 2-0 in three starts with Double-A Harrisburg, with an ERA of 0.73. The preliminaries are moving along. The main event is coming -- soon.

Price tossed his first career complete game in a 6-0 shutout victory over the Blue Jays. The left-hander allowed four hits while walking one and striking out nine. Price also raised his record on the season to 3-1 and lowered his ERA to 2.20.

Bush got blitzed, allowing nine runs on 10 hits -- including four home runs -- in 3 2/3 innings in the Brewers' 12-2 loss to the Cubs. The right-hander's ERA rose more than two runs to 4.84 on the season. The defeat was also Milwaukee's fifth in its last six home games

The Dodgers continue their nine-game road trip, having lost three of their last four games. Hiroki Kuroda, who's unbeaten in three starts this season, will get the start for the Dodgers. Oliver Perez will counter for the Mets. The left-hander is 0-2 with a 3.71 ERA in three starts.

Felix Hernandez will look to snap the Mariners' three-game losing streak when he opposes the Royals' Kyle Davies. Hernandez pitched a complete game in his last start, a 4-1 Seattle win over Baltimore. Davies suffered his first loss of the season in his last start, allowing four runs on six hits in six innings to the Blue Jays.

Roy Halladay will look to become the major leagues' first five-game winner. He'll be opposed by left-hander Jonathan Sanchez. Halladay has allowed a total of four runs in his first four starts, and is coming off a complete-game shutout win over the Braves in his last outing. Sanchez is tied for third in the National League with 27 strikeouts, and has given up only one run combined in his last two starts.

Jason Bay knows what it's like to be in a slump. Last season, he endured a 79-game stretch in the middle of the summer from April 29 to July 30 during which he hit just .226. This season, he started cold out of the gate, as he was hitting as low as .224 through April 22 before going 4-for-7 in the first two games of the series with the Braves, which raised his batting average to a more respectable .262.

However, despite the encouraging signs from his recent hitting streak, he has yet to find his power stroke this season: