The Nationals recently passed the one-year anniversary of something they'd like to forget: In April 2009, they became the first team in history to lose all three games of a three-game series despite leading in the ninth inning or later in each game. That series against Florida was the beginning of what would be one of the worst seasons ever by a bullpen. 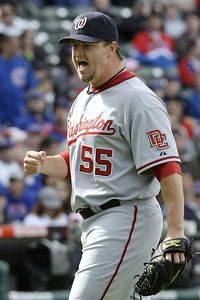 AP Photo/Charles Rex ArbogastMatt Capps has allowed only one run in 13 1/3 innings this season.

And now everything has changed, just as the Nationals planned. On Wednesday, new closer Matt Capps recorded his major league-leading 10th save, needing only 10 pitches to finish off a 3-2 victory over the Cubs. The Nationals didn't record their 10th save last year until June 17, and those 10 were recorded by five different pitchers: Joel Hanrahan, Kip Wells, Julian Tavarez, Joe Beimel and Mike MacDougal. Every reliever that was with the club as the season started was gone by year's end, partly because the Nationals had recorded a bullpen ERA of 5.09, the highest in the National League, and 1.09 above the league average.

The Pirates surprisingly released Capps after the 2009 season in part because of his salary (he is making $3.5 million with the Nationals) and in part because his ERA had jumped from 3.02 to 5.80, and his seamless control had gone haywire. Teams lined up to sign Capps, 26, but the Nationals got him mainly because they gave him an opportunity to close. And has he ever. Through Wednesday, he had not blown a save and had a 0.68 ERA.

The Nationals used 24 different relievers last year, and most of them are no longer in the organization. New GM Mike Rizzo vowed to improve the team for 2010 by starting with the bullpen for two reasons: (1) nothing is more demoralizing to a team than having a game won late, then losing it with the bullpen, and (2) Stephen Strasburg in on his way to Washington.

Strasburg might have one more start at Double-A, then he's on to Triple-A for three or four starts, then he'll be headed for the Nationals in early June. When he arrives as the savior of the pitching staff -- and a co-face of the franchise with Ryan Zimmerman -- Rizzo wanted to make sure the Nationals would have a bullpen that wouldn't blow his first major league win. Just a guess: Strasburg's first start comes against the Pirates on June 8, a Tuesday night at home. He throws seven strong innings, and Capps, a former Pirate, is there to record the save.

Lester finally got his first win and did so in dominating fashion. The Red Sox left-hander tossed seven innings of one-hit ball, retiring 14 in a row at one point during Boston's 2-0 win over Toronto. He struck out 11 and walked two.

A day after giving up five runs in the ninth inning, the Brewers' closer and all-time saves leader surrendered a game-tying solo home run to Ryan Doumit in the ninth. It was his fourth blown save in seven save opportunities.

The Twins and the Tigers close out their three-game series with a rubber match that features Carl Pavano against Dontrelle Willis. Pavano (3-1, 4.24 ERA) has allowed two earned runs or less in three of his four outings. Meanwhile, Willis (0-1, 5.00 ERA) was scratched from his last start with an illness and pitched one inning in relief Sunday, walking three and allowing two earned runs.

The Braves have only scored 13 runs during their eight-game losing streak, and it won't get any easier for the offense Thursday against Cardinals starter Adam Wainwright (3-1, 1.69 ERA). Braves pitcher Jair Jurrjens (0-2, 5.48 ERA) has looked nothing like the pitcher he was in 2009. He's allowed 11 walks and 20 hits in 23 innings.

Left-hander Brian Matusz (2-0, 4.38 ERA) owns two of the Orioles' four victories this season, and he's on the mound Thursday trying to prevent a series sweep against the Yankees. He'll need to be stellar, since the Orioles are last in the American League in runs scored. The Yankees counter with A.J. Burnett (2-0, 3.20 ERA).

Unlike most guys that hit for a high average, Miguel Cabrera is prone to striking out -- a lot. In fact, since debuting in 2003, he has whiffed 835 times, which is by far the most by any player who has also hit over .300 since then.

This season, however, is a different story, as Cabrera has fanned only 10 times in his first 21 games. He has struck out in only 10.4 percent of his plate appearances, compared to a career rate of 18.6 percent entering 2010. What's changed for Cabrera this year compared to past seasons? (Click here for more)