By Chris Singleton
ESPN
Archive
Albert Pujols may be nicknamed "The Machine," but lately he's been playing more and more "human." Though he went 3-for-4 -- all singles -- in a 1-0 loss against the Padres on Tuesday, Pujols is currently in the second-longest RBI drought of his career, posting only five since May 3 and just 10 total this month. He hasn't driven in a run since May 14. The rest of the numbers for the month aren't Albert-like, either. He entered the Tuesday's loss hitting just .256 this month compared with .345 in April. The RBIs are down, and so too are the power numbers; Pujols has only one homer in 82 May at-bats, compared with seven in 87 April ABs. Before his three-hit game Tuesday, Pujols had gone 3-for-20 over his previous six games, with one extra-base hit (a double).
[+] Enlarge 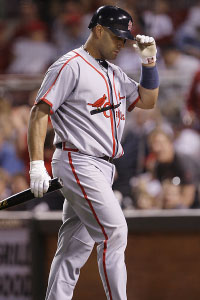 AP Photo/Al BehrmanAlbert Pujols had three hits Tuesday. He needed it after what has been an ordinary and frustrating May for him so far.
The fact that this is even a discussion proves just how good Pujols is -- he's still batting over .300 and getting flak? That aside, there's a contingent of people who can look at the way he's hitting, particularly against left-handed pitchers, and find some cause for concern. There are two possibilities that are pointless to entertain, so let's dismiss those: 1. Pujols is in the final year of a seven-year, $100 million contract with St. Louis and feeling pressured. 2. Pujols and manager Tony La Russa aren't getting along. The Cardinals have a $16 million option for next season, and he's arguably the best player in the game. I don't think the contract is weighing on his mind. His reportedly terse exchange with La Russa was simply evidence of a player being frustrated with his performance and getting a bit testier than usual. What we see and scrutinize in the media is not even a big deal in clubhouses and locker rooms because it's happening every single day. You're with the same people all the time, and you have situations where you fight with each other. But ultimately, you fight to win games together. So what could be going on? The first thing to consider is Pujols as a whole person and not just a baseball player: Is he physically and mentally healthy? Most athletes won't admit when an injury is bothering them, but even a minor tweak can make you subconsciously compensate for something in your swing. Good athletes also aren't going to make excuses if something is bothering them at home -- wife, kids, friends. Even if there is an underlying issue, they probably won't talk about it and they definitely won't attribute their performance to it. Albert Pujols is a phenomenal baseball player, so when he "struggles," it makes you wonder what's brewing in the back of his mind from a more personal standpoint. Assuming everything is all right on that front, I have noticed that Pujols is not dominating lefties the way he has in the past. He's hitting .195 against lefties. He's owned righties, meanwhile, with his three hits Tuesday raising his average to .352 against them. There's a difference between seeing the ball as it's coming toward home plate and actually locking in on it and really recognizing the rotation. I think that's where Pujols is struggling. I'm seeing his front hip fly open too soon before the ball is there. He's opening up too early as if he's concerned about pulling the ball or getting beat inside. When he's committing to a pitch early like that, he may take a cut at a ball that's just outside the strike zone. He's always had such great plate discipline, but now guys are enjoying an expanded strike zone because of his inability to recognize pitches early. He must trust his hands and his mechanics without flying open so soon. I say this, however, realizing that Pujols is one of those players who really doesn't need a hitting coach. He's just at that elite superstar level where his struggles are so much greater than the average big leaguer's slump. He's looked at not just for hitting, but for carrying his team and doing some real damage in games. Everything is magnified that much more for him. So my former player-to-current player advice? Go out and play golf. A lot of players have a tendency to work too hard to figure things out when really all they need is a little relaxation. The expectation to be great night in and night out drains all your mental energy. If he plays a round of golf in St. Louis or on the road somewhere, he'll still be doing something active and competing, but it may totally refresh his mind. It's not the monotonous baseball-tee-netting grind that you're constantly thinking about when you have to perform. You're out there having fun, and that can do wonders to help a player get back on track.

Chris Singleton is an analyst for "Baseball Tonight."

Francisco Liriano has scuffled his past three starts, losing all three after starting the year 4-0. This will be his third consecutive start against two of the three upper-tier teams of the AL. Finally, he gets one at home after losing at the Yankees and at the Red Sox. Andy Pettitte (5-1) is coming off his first loss of the year.

The Red Sox go for the road sweep, and it'll be John Lackey's charge to finish off the three-game set for Boston. Lackey's 5.07 ERA isn't impressive, and he is coming off a pair of losses. Granted, his offense didn't offer much help, scoring two total runs in defeats at Detroit and at Philadelphia. Matt Garza breezed through the Red Sox's lineup earlier this year, tossing eight shutout innings in a 5-1 win on April 12.

Tim Lincecum was roughed up in his most recent start, though he snuck away with a no-decision to keep his perfect record (5-0) intact. Lincecum pitched a season-low five innings at Arizona. Control has been an issue; he's walked five in each of his past two starts.

Vlad slashed a pair of homers and drove home five runs as part of a 3-for-4 day in the Rangers' win against the Royals. Guerrero has hits in each of his past eight games and has had five multihit games during that run. His outing against the Royals raised his season average to .349.

The Rays mustered one measly hit against the Red Sox in a 2-0 loss. Zobrist went 0-for-4 with three of Tampa Bay's 12 strikeouts against Jon Lester and Boston relievers Manny Delcarmen, Daniel Bard and Jonathan Papelbon. On top of that, both manager Joe Maddon and Carl Crawford were ejected.

One can use a traditional method to make the point that the Tampa Bay Rays have the best starting rotation in the major leagues. The Rays' starters lead the majors in earned run average by a healthy margin, despite Wade Davis getting tagged for five runs in 3 2/3 innings by the Red Sox on Monday night. (James Shields pitched well in a loss against the Red Sox on Tuesday night.)

Another way to state the Rays' case is to look at SNLVAR (support neutral league value above replacement), a Baseball Prospectus metric that measures how many more wins a starting pitcher has provided over the course of the season than would a replacement-level player who could be claimed off waivers or purchased from a Triple-A roster. A total of 57 major league pitchers have accumulated at least a 1.2 SNLVAR with just a little more than a quarter of the season gone. A pitcher who finishes with a 5.0 mark or better is considered to have had a very good season. The Rays have the only rotation in which each member has at least a 1.2 SNLVAR. The Rays are one of only two teams with three starters ranking in the top 25, along with the San Francisco Giants, who have Tim Lincecum (fifth), Jonathan Sanchez (17th) and Barry Zito (24th).