A tutorial on arguing with umpires

By Eduardo Perez
ESPN
Archive
The best umpire is the umpire you didn't notice. I'll always remember teammates and coaches saying that. Unfortunately, this was a noticeable week for a few men in blue. Bob Davidson's heated exchange with Carl Crawford and Joe Maddon made headlines on Tuesday, and Joe West followed up his second-inning ejection of Ozzie Guillen on Wednesday by tossing pitcher Mark Buehrle -- the aftermath of which generated even more bleeps for Guillen's highlight reel of tirades and now has launched an investigation from the league office. Having experienced roles as both a player and manager, I can say that there is definitely an art to arguing with umpires.
[+] Enlarge 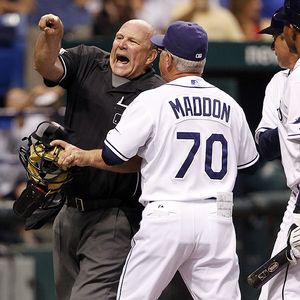 AP Photo/Mike CarlsonJoe Maddon and umpire Bob Davidson's disagreement was just one in a week full of them between umps, players and managers.
A manager has to be able to insult an umpire's decision-making ability without personally offending him. Sometimes you know that the umpire made the right call, yet your player doesn't seem to think so. In situations like that, you almost always still back your guy up because you don't want to lose his trust. Managers really have to weigh the consequences of their actions and try to strategically manipulate the results to fire up their team. For example, you don't have a team meeting before you face the Yankees. You have a team meeting before you face the Orioles or the Royals. If you try to ignite some fire into your squad before you take on a sub-.500 team and it goes out and plays well, the team can look back and feel like it was a successful talk. Even though your guys are playing a team that they're supposed to be better than, a lot of this game is mental. As a manager in the winter leagues, I sometimes argue with umpires and don't even talk about the disputed play at all. I just do it to spark my team. One time I had an argument with an umpire who swings back and forth between the majors and winter ball in Puerto Rico. I came out of the dugout and I said, "You're not going to kick me out yet, you're going to kick me out in a little bit but right now I have to put on a show so that the fans get riled up and my team gets riled up. And if my team gets riled up -- we're going to win this game." He had no idea what I was talking about so we went back and forth and I said, "Come on, start yelling! Move your body! That's all you got?" I told him to get his hands working and he wasn't very happy about that request so, eventually, I got to him. I applauded him and asked him to get me out of the game, so he tossed me. Of course, I then yelled, "That's it?! That's not even going to make the highlights!" But everyone on my team thought that I let him have it and we came back from two runs down to win the game. You have to know when to do it and you have to know which umpire can handle it, but arguing can be a very effective motivational tool. As a player, it's a little more challenging because you don't want an umpire to hold a grudge against you and get inside your head. Most umpires call it like it is and would never dream of having a personal vendetta with a player, but that doesn't mean there aren't players who have convinced themselves otherwise. From my experience, umpires don't like it when players use their hands as a form of communication. They would rather have you yell at them than flail your arms because everything is on TV and it makes them look disrespected, like you're showing them up. If I disagreed with a strike call, I was taught to look down at the plate and be specific about what I saw: "Hey, I had that pitch 6 inches outside." Making eye contact and asking the umpire where the pitch was is the wrong move because you're making more of a scene and questioning his judgment instead of confidently stating your own opinion. At the end of the day, these umpires are just like professional athletes -- they're amazing at what they do but they can have an 0-for-4 day with four strikeouts. You just have to know when to utilize the art of arguing.

Eduardo Perez is an analyst for "Baseball Tonight."

Chris Volstad has lost each of his past three starts, though he hasn't gotten much in the way of help. The Marlins scored one run in each of the past two losses and only three in the defeat before that. Kyle Kendrick was roughed up in his most recent outing, not making it out of the fifth in a 5-0 loss against the Red Sox.

The Rangers have struggled away from home so far this season, going just 8-12. The benefit in this one is they send out Colby Lewis, who has a 3.77 ERA away from home in five starts. Kevin Slowey has not gone more than 5 2/3 innings since April 20, a stretch of six starts.

Jeff Francis makes just his third start of the season as he continues his way back from offseason shoulder surgery. The Rockies hope it looks like the first two. The lefty has allowed one run in 13 1/3 innings. Carlos Monasterios will be making his 12th appearance of the season, but only his second as a starter. He is replacing Ramon Ortiz.

Kubel pounded the collection of pitchers the Yankees threw at him. Kubel homered twice, drove home five runs and scored three in the Twins' win at Target Field. Before this, Kubel had hit just one homer the entire month.

Haren had trouble keeping the ball in the park against the Rockies. He served up four homers in an 8-2 loss. That's bad, right? What's even worse is that it's the second consecutive start he's served up four homers. The start before that, he gave up two homers, making it 10 over three starts and 18 2/3 innings.

This week in the TMI Power Poll, the topic was the best third basemen in the game today. There was a bit of a youth movement at the hot corner as four members of the top 10 have fewer than four years of service in the big leagues. Meanwhile, a former three-time MVP is not in the top spot. Evan Longoria, the face of a young Rays team that has the best record in baseball, took the top spot. He has developed into a complete player. According to "Baseball Tonight" researcher Mark Simon, Longoria is third in the MLB with a .738 offensive winning percentage. On the defensive side, Longoria's 17.0 UZR tied for the lead among all third basemen over the past two seasons (with Ryan Zimmerman).