Scioscia guides the Angels with a steady hand

By Tim Kurkjian
ESPN The Magazine
Archive
The Los Angeles Angels lost their ace, John Lackey, and their leadoff man, Chone Figgins, to free agency after last season. They lost their best hitter, Kendry Morales, last week after he broke his leg in a celebration at home plate. Plus, their closer, Brian Fuentes, is struggling with a 5.52 ERA. And yet, there are the Angels, as always, right around first place.
[+] Enlarge 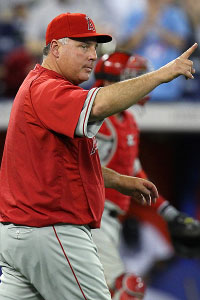 Tom Szczerbowski/US PresswireMike Scioscia has the Angels in the thick of the AL West race … again.
They have talented players, but the biggest reason for their success this year, and over the years, is manager Mike Scioscia. He, of course, will acknowledge none of this. "It's his consistent approach to the day,'' said Rays manager Joe Maddon, who was on Scioscia's staff with the Angels for six years. "Whether they win or lose, the players see the same guy the next day. The players support that. And, he is fearless. He is never afraid to answer questions, even when something went wrong. It does make a difference to the players. They look at him as a guy who will put things on his shoulders every day.'' Scioscia has been the Angels manager for 10 years, and is signed through 2018. The players know he will be there in 10 years. They know if they don't play hard for him every day, they'll be gone in 10 minutes. That's the difference with the Angels and some other teams: stability in the manager's office. Since 1995, the Baltimore Orioles, Kansas City Royals, Cincinnati Reds, Florida Marlins and Houston Astros have each had eight managers. When players aren't sure who the long-term manager is going to be, and are playing for an interim guy, sometimes they don't play as hard. Scioscia arrived in Anaheim in 2000 after the Angels had gone 70-92 in 1999. They went 82-80 the next year. They have been under .500 twice in his 10 seasons, and his winning percentage is .556. That is the highest winning percentage by an Angels manager, and he has the most wins in club history. The past six seasons, he has won five American League West titles, and one second-place finish. In 2002, the Angels won the World Series with Scioscia leading the way. He was named AL Manager of the Year in 2002 and 2009. No manager in recent years had to overcome what Scioscia did last year when his team opened the season with two key starting pitchers on the disabled list; then a third, Nick Adenhart, was killed in a car crash. Scioscia helped hold that team together when it easily could have crumbled. Instead, it rolled to the West title with 97 wins. Scioscia sets the same environment every day: relaxed, but intense. It starts in spring training, every morning at 9:30. Scioscia assigns tasks and duties for his players to be presented in front of teammates as a part of a team-building exercise. A former pitcher, Chris Bootcheck, is a golfer, so Scioscia had him explain in front of the team how a golf club is built. Scioscia sent pitcher Jarrod Washburn to do a report from a local ostrich festival. The next morning, he arrived in the clubhouse with an ostrich; then-Angels pitcher Ramon Ortiz leaped into his locker and screamed in Spanish, "Get that big chicken out of here!'' "It's all about having fun,'' Torii Hunter said.

The rookie phenom -- no, not Stephen Strasburg -- takes the mound for the Reds. Mike Leake is 5-0 with a 2.22 ERA in 11 starts this year. Over his past three starts, he has allowed two runs, spanning across 20 1/3 innings.

Dontrelle Willis makes his second start since joining the Diamondbacks. His first one went well, with Willis scattering five hits over six shutout innings in a 4-3 win over the Rockies. His opponent, Tommy Hanson, has won each of his past three starts.

That big Roy Halladay vs. Josh Johnson showdown from Wednesday? Well, rain didn't allow it. So the two aces will try again in Philadelphia. Halladay is 2-0 against the Marlins so far this, with of course a perfect game. Johnson is 0-1 against Philly; he gave up an unearned run -- the game's only run -- opposite Halladay's perfecto.

Against his old team, Masterson pitched a two-hit, complete-game shutout. After opening the season 0-5, Masterson has won each of his past two outings. Of course, in beating the Red Sox, he certainly had help, considering the Indians put 10 runs on the scoreboard. Masterson took care of his end, striking out six against two walks and those two hits.

The Tigers didn't give up just one seven-run inning in a loss against the White Sox. No, they gave up two, with Chicago putting up a touchdown in the fourth and the eighth. Porcello began the Detroit pitching meltdown, giving up eight hits, eight runs and two homers in 3 1/3 innings.

While the game of baseball carries tremendous levels of uncertainty in a variety of areas, at least one constant exists: When a very young player begins to make an impact in the major leagues, everyone takes notice. (See: Strasburg, Stephen.) Perhaps it's due to the idea that, while the game is certainly no stranger to stars, getting such a head start could potentially lead to super-stardom, a legendary career bound for Cooperstown that fathers will tell their sons about years later.

Similar sentiments apply to Justin Upton's 2009 campaign and to everything Felix Hernandez has done since entering the league while unable to buy an alcoholic beverage. Well, there is another youngster continuing to produce historical numbers that some forget is still technically not even at his peak age, regardless of how one feels about the subject. That player? Miguel Cabrera of the Detroit Tigers. Cabrera is just 27 years old, but it feels as though he has been in the game for more than a decade. It's easy to forget that the current front-runner for the AL MVP entered the league as a 20-year-old third baseman back in 2003, when he hit .268/.325/.468 with 12 home runs in 346 plate appearances for the world champion Florida Marlins. And though Cabrera's rookie numbers were not eye-popping by any stretch, they were very impressive for a player of his age.