Mets have eyes set on arms

By Buster Olney
ESPN The Magazine
Archive
The first sign that it will be a buyers' market this summer came on Tuesday, in the Arizona Diamondbacks-Oakland A's trade. To review, the Diamondbacks kicked in about $375,000 in order to make a trade of Conor Jackson happen, so that they could save $1.5 million in the remainder of Jackson's salary.
[+] Enlarge 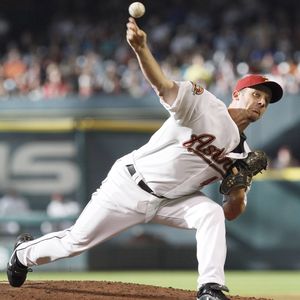 Bob Levey/Getty ImagesRoy Oswalt wants out of Houston, could Citi Field be his landing place?
"Last winter, you couldn't have gotten that kind of deal [for Jackson]," mused one GM. "Now the Diamondbacks are kicking in a quarter of his salary so that they could save a lot of money." If you are a team willing to take on some dollars this summer -- if you have some financial flexibility -- then you probably will be in a really good position to make some good things happen. The perception of many executives is that there are going to be more teams trying to dump salary this summer than there will be teams that are able to take on dollars. Which brings us to the New York Mets. Do you remember that scene in the movie "Trading Places" in which Eddie Murphy and Dan Aykroyd are cheerily plucking offers from traders on the floor of the New York Stock Exchange? Well, that's really the position the Mets will probably be in this season, as the trade market develops. They would like to add a starting pitcher -- and not some five-inning, 100-pitch, grind-it-out No. 4 or No. 5 starter. They want a guy who is comparable to their two best starters, Johan Santana and Mike Pelfrey, and it appears as if they'll have several choices. Roy Oswalt is available, but according to sources, the Mets are not enamored of the veteran right-hander, knowing that he will be very expensive, with the $27 million owed to him for the rest of this year and next year, and knowing that the Astros will want good prospects in return for him. The Mets do like Cliff Lee, and there is sentiment in some quarters of the organization to take a serious run at acquiring the left-hander; in fact, the Mets might wait to make a deal for a pitcher until they are absolutely sure that they can't get Lee. But the Mets don't match up as well with their prospects in a possible trade with Seattle as other teams, such as the Minnesota Twins, who could theoretically offer catcher Wilson Ramos. The best available options, then, could be Cleveland right-hander Jake Westbrook or Oakland's Ben Sheets, or Cleveland's Fausto Carmona. Remember, the Mets finished second in the bidding for Sheets during the winter, and since he solved a pitch-tipping problem from earlier this year, he has been solid, throwing at least six innings in eight consecutive starts. In that time, he has reduced his ERA by a run-and-a-half. Sheets is making $10 million this year, and there aren't many contenders who could absorb his salary without wincing; the Mets could. Carmona is having a bounce-back season, posting a 3.23 ERA and throwing with greatly improved command; on a given day, he is capable of shutting down a good lineup with his power sinker. But the Mets' experience with Oliver Perez -- another pitcher with erratic command -- might temper their interest in Carmona, who is signed for $6.1 million for next year, and then a series of options through 2014. Arizona's Dan Haren is also available, but given what the Diamondbacks surrendered for the All-Star right-hander to acquire him, they presumably would want significant return in prospects -- and sources say that the Mets' preference is to take on a player who costs them more in dollars than in prospects. But no matter whom they target, it appears that the Mets -- one of the few buyers in a buyers' market -- are going to get somebody good.

Easily the day's best pitching matchup, with baseball's best so far this season, Ubaldo Jimenez, against the resurgent Francisco Liriano. The numbers for Jimenez remain staggering -- he carries with him a 1.16 ERA and 0.97 WHIP. Opponents are hitting just .180 against him. Liriano, meanwhile, has been streaky. He opened the season 4-0, lost his next three decisions and has now won his past two.

The three-game set wraps up with Andy Pettitte going to the mound. The lefty is 3-0 over his past four starts. It's been hard scoring against him; in his last seven outings, Pettitte has permitted more than two runs just once. Phillies starter Kyle Kendrick has faced only one current Yankee. Mark Teixeira is 1-for-12 against Kendrick.

It hasn't been a good few weeks for Rays starter James Shields. The righty has lost each of his past four starts. His most recent one was his worst; Shields gave up nine hits, 10 runs and three walks in 3 1/3 innings of a 14-9 loss against the Mariners. On May 20, after he beat the Yankees, Shields' ERA rested at 3.08. It now stands at 4.55.

Yes, that would be the same Moyer who gave up nine hits and nine runs in one inning of work his last time out against the Red Sox. Against the Yankees, Moyer went eight innings, allowing three hits and two runs. He became the oldest pitcher ever, at age 47, to beat the Yankees.

The Mets had no trouble hitting Talbot in an 8-4 win over the Indians. Talbot gave up 13 hits and eight runs in 5 2/3 innings of work. Every Mets starter had at least one hit, with Angel Pagan's 3-for-5, three-RBI day pacing New York in its sixth consecutive win.

Tuesday night offered baseball fans a rare opportunity: not only the chance to see a rematch of last year's World Series participants, the Philadelphia Phillies and New York Yankees, but also the chance to see each team send its respective ace to the Yankee Stadium mound, Philly's Roy Halladay and New York's CC Sabathia.

Unfortunately, no pitchers' duel materialized. Halladay conceded three home runs, Sabathia wasn't exactly at his sharpest (walking three in seven innings) and the Yankees won by a distinctly unduelish score of 8-3. Meanwhile, in a less publicized (and considerably less attended) affair, C.J. Wilson of the Texas Rangers and Josh Johnson of the Florida Marlins gave us the game we might have expected from Halladay and Sabathia, allowing only six hits and three runs between them over 13 collective innings. Yet, despite the cosmetic difference in run total (11 on the one hand, five on the other), these two games help demonstrate that simple runs-allowed numbers are hardly the best way to determine whether a pitcher has truly "shut down" the opposition.