Cabrera focused on what's ahead, not behind

By Aaron Boone
ESPN
Archive
Seven years ago, Miguel Cabrera came into the big leagues and showed everyone that he was born to hit. Now, he leads the majors in RBIs (60), is second in homers (19) and ranks ninth in batting average (.327). To some, these results may seem surprising, especially after his tumultuous personal battles helped derail the Detroit Tigers in the final week of the 2009 regular season.
[+] Enlarge 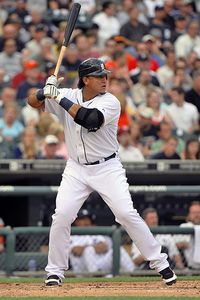 Steven King/Icon SMIMiguel Cabrera is in the top 10 in all the Triple Crown categories.
But it's clear that Cabrera spent his offseason addressing any issues he may have had so he could come into spring training ready to lead his team and frustrate pitchers everywhere. The numbers speak for themselves, but they also represent just how badly he wants to take this Detroit team to a title. I had a chance to play with Cabrera when we were both with the Florida Marlins in 2007, and what really blew me away about him was how smart he was at the plate. We would talk over the course of a game and you could just tell that he had a great understanding of how a pitcher was going to attack a certain hitter. He knew what they were going to throw, how to make contact, and where to hit it. He also gave me a lot of advice on my own approach at the plate, often predicting where a particular pitcher would throw to me. I started calling him "Albert Einstein" because that genius light went on when he was in the batter's box. The first time I used his nickname he had no idea who Einstein was. But after friend and teammate Alfredo Amezaga explained the moniker, Cabrera thought it was pretty funny. Besides his superior batting knowledge, Miggy benefits from being part of a powerful offensive lineup. Sandwiched between Magglio Ordonez (.333) and rookie sensation Brennan Boesch (.337), pitchers don't have much choice when it comes to throwing to him. He has just seven intentional walks on the year, and he is making every at-bat count. His Triple Crown chances may stop at the batting title, with guys such as Robinson Cano and Ichiro Suzuki around, but he's only 27 years old and should continue to put up big numbers, especially if he can stay healthy and sharp. With Cabrera firing on all cylinders, it should be a fun race in the AL Central -- a race that Cabrera wants to leave a positive mark on this time around. When people question the character of some players, the players shrink into a corner and let their careers crumble. But great players will respond with even more focus. They'll find ways to get back on track and will be better players because of it. In Miguel Cabrera's case, I think he's done just that.

Aaron Boone is an analyst for "Baseball Tonight."

The next chapter of the Stephen Strasburg experience. Some of the mind-boggling numbers after his first three starts -- 2-0, 1.86 ERA, 0.78 WHIP, .149 opponent's batting average, 32 strikeouts in 19 1/3 innings. He has issued five walks, but all of those came in one outing at Cleveland.

Opponents are having trouble with R.A. Dickey and his knuckler this year. Dickey is 5-0 with a 2.82 ERA in six starts. After a no-decision in his first outing of the year, Dickey has rattled off five straight. He's even racked up a few strikeouts in his two most recent starts, getting 15 in 13 innings against the Orioles and Indians.

The Red Sox get their crack at Ubaldo Jimenez, who enters 13-1 with a 1.15 ERA. Jimenez did leave the park Tuesday because of dizziness, but he is expected to make his start against Boston. He faces John Lackey, who is 4-0 over his past five starts. It hasn't hurt that the Red Sox have scored eight or more runs in the four games Lackey has won during the current streak.

Sure, Moyer tied the all-time record for homers allowed by serving up a second-inning solo shot to Russell Branyan. It was, however, one of only two hits Moyer allowed over eight innings in a 2-1 win against Indians. Aside from a beating at the hands of the Red Sox, in which he lasted only an inning, Moyer has gone at least eight innings in three of four starts and won each of those three outings.

Verlander started what turned into an ugly night in a blowout loss against the Mets. The righty gave up five runs and three walks in two innings, and was followed by Jay Sborz, who gave up five more runs in only two-thirds of an inning of work.

While Rookie of the Year is usually a humble award relative to the MVP and Cy Young, the race for this year's title may be just as exciting as those for the other major awards around baseball. Mike Fitzpatrick recently called the rise of 2010's young crop of big league players a "rookie revolution," but do the numbers match the hype? Indeed, they do.

Compared to past seasons, MLB has seen an upshot in production from first-year players that is relatively unprecedented. First-year batters have amassed 9.0 wins above replacement thus far this season, and if they attain as many plate appearances as they've averaged since 2002, they are on pace for 35 WAR for the season, which would beat the 2008 record of 27.6 by a significant margin. If rookie pitchers reach their same inning pitched total as last year, they'll put up 37 WAR, tops since 2002. While you have no doubt heard about the two big names in this class, it's not just Stephen Strasburg and Jason Heyward making waves. Detroit's Brennan Boesch is slugging an absurd .617 on the season, best among all rookies in baseball. His teammate, Austin Jackson, is hitting .308 with 10 stolen bases in 11 tries and playing quality defense in center field. Third baseman David Freese of the Cardinals and first baseman Gaby Sanchez of the Marlins may be older rookies, but their numbers are not very amateurish. Freese is hitting .306/.370/.425 and Sanchez has an .819 OPS. Mets first baseman Ike Davis has impressed New York with his glove, but his eight homers have also helped an offense that has needed power. Like Davis, Rangers first baseman Justin Smoak hails from the 2008 draft class, and like Ike has hit eight dingers on the year. Cubs shortstop Starlin Castro has been solid in his 40 games in Chicago, hitting .266 with very good defense.