By Tim Kurkjian
ESPN The Magazine
Archive
When the Baltimore Orioles lost Tuesday night, their record fell to 19-51, by far the worst in the major leagues, and equaling the worst first 70 games in club history, tying the 1988 Orioles. I covered that team every day. It lost the first 21 games that season; it was historically bad. And yet this team, in some respects, is even worse off than the 1988 team.
[+] Enlarge 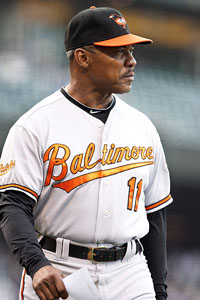 Jason O. Watson/US PresswireJuan Samuel is the latest man to be put in charge of the struggling Orioles.
In 1988, the fans in Baltimore loved the Orioles, win or lose. When they returned home after finally winning their first game of that season, fans packed Memorial Stadium on a Monday night to welcome home a team with a 1-23 record. Now, the fans in Baltimore have stopped coming out to the park, and they have stopped caring. It is so sad to watch a franchise with such a rich history and tradition falling this far. The Orioles are the only team in major league history to follow a 98-win season (in 1997) with 12 consecutive losing seasons. This will be 13 years in a row under .500, and this is shaping up as the worst of all. And it is coming at the worst time. Down the road, the Washington Nationals have quietly built an improved team. And now, publicly and loudly with phenom Stephen Strasburg, the Nationals might be taking control of the baseball interest in the Washington/Baltimore area. The only hope for the Orioles is to blow everything up and start over. Bobby Valentine, who has already interviewed for the managerial job, could do that. But he withdrew his name on Wednesday. Buck Showalter, who interviewed for the job on Wednesday, could do that. Bob Melvin, a former Oriole who likely will get an interview, could also do that. The detonation will have to begin in the minor leagues, which one source said "has very few position players as prospects.'' Most of the good young players in the system are in the major leagues, though some, such as pitcher Chris Tillman, have been sent back to the minor leagues because they aren't ready. That is the most troublesome part of the 2010 Orioles. This was the year that they were supposed to turn the corner and perhaps get close to .500. Instead, they are going the wrong way. Some young players, including center fielder Adam Jones, appear to be going backward, not forward. And some of the veteran players that were acquired in the offseason, including first baseman Garret Atkins, haven't worked out. Through Tuesday, the team that played Eddie Murray at first base for 12 years has no homers from their first basemen this year. But there is hope. The Orioles make a lot of money, mostly off their cable TV package with MASN. Lagging attendance is a problem, but there is money in place for the Orioles to improve in a hurry. They have managerial candidates capable of making swift and significant changes. They might not hire a manager until after the season, so he won't be associated with this year's team. That would be wise. Still, the sooner the rebuilding begins, the better.

Tim Kurkjian is a senior writer for ESPN The Magazine and is an analyst for "Baseball Tonight."

Padres starter Wade LeBlanc has been stellar his past three times out, allowing only two runs over 19 2/3 innings while going 2-0 to even his season record at 4-4. His ERA stands at 2.88, but opponents are hitting him, with his batting average against resting at .283. Matt Garza is coming off his worst outing of the year, a dreadful 1 1/3-inning, seven-run disaster against the Marlins.

Gavin Floyd has just one win since April 29, going 1-5 with three no-decisions. That can be deceiving, though, since he is 0-1 over his past three starts but allowed only one run in each of those outings. The White Sox were shut out in one of those games, lost 2-1 in another and had a bullpen implosion in the third.

Daisuke Matsuzaka pitches for the first time since June 7. He has been on the disabled list with a strained forearm. That last start before heading to the DL was solid; Dice-K pitched eight shutout innings in a 4-1 win at Cleveland. Rockies starter Jason Hammel, meanwhile, is 4-0 over his past five starts.

On a day filled with big-name pitchers -- Ubaldo Jimenez, Stephen Strasburg and Chris Carpenter, to name a few -- it was perhaps Dickey who shined brightest. By tossing eight shutout innings in a 5-0 Mets win, Dickey improved to 6-0 on the season and lowered his ERA to 2.33.

A hot Rangers team did not take it easy on Maholm, who lasted only one inning. Maholm had an interesting line, though. He gave up seven runs, seven hits and five walks. In one inning of work, he threw 55 pitches for his second consecutive loss.

You know when you recommend a movie to a friend, but your buddy hated the movie? It not only feels like you let your friend down; it feels like his opinion of you has lessened, too.

Well, that's kind of how it was when we, baseball analysts, recommended Ricky Nolasco to fantasy fans. If you're one of the people who listened to our advice on this hurler, I'm sorry. I hope we can still be friends. Through his first 14 starts this season (before Wednesday's win against the Orioles) Nolasco has made my research look silly. His ERA rests at 4.90, slightly down from last year, but by no means enough to matter. His K/BB ratio is still impressive at 3.53, but the drop is caused by a rather severe downturn in strikeouts. After punching out around 8.5 batters per nine in 2008-09, Nolasco's rate has dropped to a meager 6.5 per nine.