Astros poised for big year in 2011

By Steve Berthiaume
ESPN
Archive
The Houston Astros will win the NL Central in 2011. I'm calling it right now -- Astros '11 division champs. Houston has had a very intriguing summer. What began as a lost season for the Astros instead became a midseason remodeling job which has seen Houston proactively transform from a top-heavy disappointment bloated with big salaries to a competitive, cost-effective contender, which in an arguably weak NL Central could establish the Astros as a 2011 front-runner.
[+] Enlarge 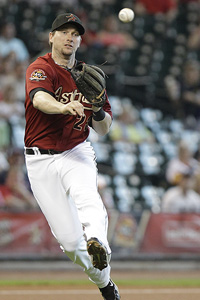 The lefty tossed seven shutout innings against the Blue Jays, scattering four hits to go with four strikeouts. It was Lester's fifth consecutive win and seventh in his past eight starts. He has given up two or fewer runs in six of those eight outings.

The Nationals' bullpen had a three-run lead in the ninth inning against the Phillies. Storen couldn't make it stick. He did not get an out, but gave up four hits and four runs as Philadelphia turned a 6-3 deficit into a 7-6 home win. The final blow came when Storen served up a game-ending two-run shot to Jayson Werth.

The Rays trail by a half-game in the AL East race, but still hold a 6½-game lead over the Red Sox in the wild card. Matt Garza has been knocked around by the Yankees this year, which included his most recent start when he gave up nine hits, six runs and two homers in 4 2/3 innings.

The Phillies can either put away the Braves in the NL East or Atlanta can draw even. Philadelphia, which holds a three-game lead in the division, sends Cole Hamels out for the opener. How good has Hamels been lately? He has won each of his past four starts and has allowed only one run in that stretch, which spans 29 2/3 innings.

The Reds' Homer Bailey lasted only three innings in his most recent start because of a bout of dizziness. Cincinnati would probably like to close the month a bit better than it started it. The Reds have won just one series this month, and that was against the Pirates.