MIAMI -- Back spasms forced New York Yankees pitcher David Wells from his start in Game 5 of the World Series against the Florida Marlins after only one inning Thursday. 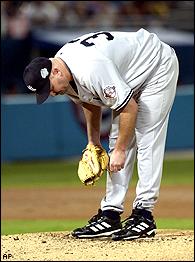 Wells, who is 10-3 lifetime in the postseason, retired the Marlins in order in the first inning, but Jose Contreras began warming up in the New York bullpen during the top of the second, and David Dellucci pinch hit for Wells.

Dellucci grounded out, ending the inning, and Contreras came on in place of Wells, the losing pitcher in Game 1 Saturday.

"This very well may have been my last World Series start. I wanted to go out and have a good outing, but I just wasn't very comfortable," Wells said.

The Yankees already had a depleted lineup when Wells walked off the mound with a pained expression. An examination in the clubhouse showed he had acute lower back spasms caused by a recurring disc problem.

New York was without All-Stars Alfonso Soriano and Jason Giambi in the starting lineup.

Manager Joe Torre benched slumping Soriano in favor of
Enrique Wilson at second base and removed Giambi from the lineup
during batting practice because he was hobbling on a sore left
knee. Nick Johnson started at first base for Giambi.

Giambi homered as a pinch hitter in the ninth, and Wilson's RBI double cut it to 6-4. But it wasn't enough for the Yankees.

The hefty Wells has been bothered by back problems for years. He
had surgery in 2001, missed a start in August this season and
received an epidural painkilling shot.

"It really tightened up when I threw the curveball," he said. "It was a little tight yesterday, but I was confident that I could work through it."

Wells appeared to grimace on the mound after Luis Castillo's
groundout for the second out of the first inning. His departure
sent Yankees general manager Brian Cashman scurrying up an aisle in
the stands -- for some information, no doubt.

"He is as big a competitor as you can find and he fights through a lot of stuff, but today he couldn't get through it," Cashman said.

It was the shortest outing by a starting pitcher in the World
Series since San Diego's Mark Thurmond got only one out against the
Detroit Tigers in Game 5 in 1984. And it could be Wells' last
appearance in the majors -- the Yankees hold an option on his
contract for next season.

"You could see just by his body language in the first inning he was having a tough time just bending over and trying to throw his pitches," Torre said.

Contreras, who threw two scoreless innings in Game 4 on
Wednesday night, didn't have much time to warm up. He retired his
first two batters, then began to struggle.

He walked two hitters in a row, and yelled "Look out!" as his
pitch sailed toward Derrek Lee's head for ball four. Alex Gonzalez followed with an RBI double to deep right-center, and pitcher Brad Penny hit a two-run single to give Florida a 3-1 lead.

Contreras gave up a two-out RBI double to Juan Pierre in the
fourth, making it 4-1.

The right-hander was lifted for a pinch hitter in the top of the fifth. He allowed four runs and five hits in three innings.