NEW YORK -- In hindsight, perhaps it was a mistake for the Yankees to raise a "Mission Accomplished" banner above their dugout after Game 3.

After more than 80 years of being stuffed into their lockers by the Yankees, after eight decades of receiving atomic wedgies, after generations of having sand-kicked in their faces and their girlfriends stolen away -- and most importantly -- after completing the most extraordinary comeback in baseball history, the Boston Red Sox have finally overcome their hated nemesis to reach the World Series.

Grady Little, you can show your face in Boston again. Mike Torrez, you're forgiven. Don Zimmer, you're off the hook. Tex Hughson and Joe McCarthy, you don't have to worry about graffiti on your tombstones anymore.

As for you, Bill Buckner, well, you'll just have to wait and see whether the Red Sox can beat Houston or St. Louis before you can be absolved of your sin.

"Tonight is about winning the American League and going through the Yankees to do it,'' Boston general manager Theo Epstein said. "This is for all the great Red Sox teams and players that would have been in the World Series if it hadn't been for the Yankees. The 1949 team, 1978, 1999, last year.

"This is for all the fans who would have been able to go to the World Series if it hadn't been for the Yankees.''

For generations, Boston fans have spent their winters cursing the Yankees and wondering "what if?'' What if Grady hadn't stayed too long with Pedro Martinez? What if Torrez hadn't given up the home run to Bucky Dent? What if the Red Sox had won one of those two final games against the Yankees in 1949? And the big one, what if they hadn't traded Babe Ruth to the Yankees?

There should be no such disturbing talk about the Yankees this winter. Well, other than on talk radio.

This winter, even if the Red Sox lose the World Series, Boston fans can take solace in the sweet knowledge that their team somehow pulled off something truly historic, something unprecedented, something previously considered impossible. In the previous 100 postseasons and the previous 138 best-of-seven series, no team had ever fallen behind 3-0 in the postseason and rallied to force a seventh game, let alone win it. The Red Sox not only did both, they crushed the Yankees, beating them with a pitcher who required sutures in his ankle in Game 6 and then routing them 10-3 in Game 7 at Yankee Stadium.

So, raise a pint at the Cask and Flagon, buy a round at "Cheers'' and tap the keg at the Kennedy compound. Or, as Tim Wakefield shouted during the Red Sox celebration, "Break out the defibrillators!'' The Red Sox are going to the World Series for the first time in 18 years and the Yankees are going golfing. After the National League series ends tonight, the World Series opens Saturday at Fenway Park and the unveiling of the David Ortiz statue will follow in the public garden. 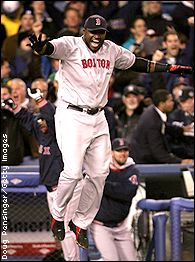 "One day I was driving from my house to the stadium on a workout day and I saw a big sign on the street that said, 'Keep the Faith.' And I saw a photo of Manny and he had a big smile," series MVP Ortiz said of the historic comeback. "I just parked in front of the photo and I just sat down for a minute and thought about what we've been through the whole year. Then I went to the field and I just expressed myself to my teammates about what the Boston nation has been waiting for us and they expect from us.

"So it doesn't matter if we were down 3-0. We just have to keep the faith because the game is not over until the final out.''

Oh, Red Sox's fans are very well aware of that fact, David. After watching their team come within one strike of winning the 1986 World Series and within five outs of winning last year's Game 7, Boston fans know all too well that it ain't over 'til it's over.

"We know the past and we feel the fans' pain,'' first baseman Kevin Millar said. "We felt their pain last year on the field and it pushed us this year.''

Meanwhile, the Yankees finally know what it was like for the Red Sox and their fans all these years. Sunday, they were three outs from wrapping up a four-game sweep. Monday, they were two innings from spanking the Red Sox again. Tuesday, they had the pennant-clinching run at home plate in the ninth inning.

And Wednesday night, "Who's Your Daddy?'' T-shirts went on sale for half-price.

Today, no doubt, the pink slips go out.

"It's upsetting to lose,'' Derek Jeter said. "But in terms of being the first team to lose after being up 3-0, I couldn't care less.''

Don't worry, Derek. After a winter of listening to Yankees fans rip you for the collapse, you will.

Baseball fans everywhere will be dissecting this cuticle-threatening series for a long time. Two of the games went into extra innings, set records for length and were won on the final swing. Two others had the potential tying run on base or at bat when they ended. Ortiz won two games in one day on his final swings. Curt Schilling became the literal symbol of these Red Sox when he won Game 6 with blood soaking his sock from where doctors sutured tendons in his right ankle.

And of course, there was Boston's historic, unprecedented, credibility-defying comeback.

"We knew we had to win Game 4, not because it was an elimination game but because winning it would put the ball in Pedro's hand for Game 5,'' said Millar, who started the comeback with a leadoff walk in the ninth in Game 4. "And that would get the ball to Curt for Game 6. And then it would be Game 7 and anything can happen.''

Talk about your new world order. The Red Sox are now the official face of inspirational comebacks while the Yankees have taken over as the symbol of choking, October collapses.

Prior to Game 7, the Yankees invoked their 80-some year dominance over the Red Sox by sending Dent out to the mound for the ceremonial first pitch. He threw the ball to Yogi Berra, the Hall of Fame catcher who told the Yankees not long ago that the Red Sox have been trying to beat New York for more than 80 years and "Those guys have never beat us.''

Well, now they have.

The Red Sox led 2-0 before the Yankees even batted when Ortiz slammed a two-run homer to right off starter Kevin Brown, giving him three for the series and 11 RBI ("Who's your Papi, New York?'' Millar shouted after the game). They led 6-0 when Johnny Damon, who struggled so much the first six games, hit a grand slam off reliever Javier Vazquez. They extended the lead to 8-1 when Damon crushed a second homer into the upper deck in the fourth inning.

There were no sutures necessary but Derek Lowe, who helped save the Red Sox season with his Game 4 start, held the Yankees to one run and one hit in six innings on two days rest. Brown, meanwhile, failed New York yet again by retiring only four batters before leaving for a scheduled pay-per-view bout with the clubhouse plumbing system. Vazquez, the other big arm acquired during the winter, fared little better, allowing the grand slam to Damon on his first pitch and walking five batters in two innings.

For the hitters, it was more of the same. A Yankees lineup that scored 19 runs in Game 3 managed just 13 the final four games while stranding runner after runner. And as for Alex Rodriguez, the $252 million superstar acquired in the winter's biggest trade and the focal point of much of the Yankees-Red Sox rivalry this year? He went hitless in four at-bats and didn't get the ball out of the infield.

Game 7 got so out of hand that chants of "Let's Go Red Sox'' drowned out the Yankees fans during the late innings. Or perhaps those were just the cheers echoing down from the bars in Kenmore Square.

Not so fast though, fans. The Curse of the Bambino isn't over yet -- Boston must win a World Series for the first time since 1918 to end that.

And it should have. After all those years of losing to the Yankees, those were vintage bottles.