NEW YORK -- Someday, we may appreciate what just happened over the past four days. Right now, however, "I'm finding myself just wondering what day of the week this is,'' Yankees general manager Brian Cashman said.

Whatever day this is, it's probably not going to be very pleasant for Cashman. It won't be easy explaining to George Steinbrenner how the Yankees just became the first team in baseball history to blow a 3-0 lead in a postseason series -- and worse, to blow it to the Red Sox. Heck, it's difficult enough explaining it without having a maniacal owner yelling in your face and threatening that you'll never work in this business again.

Forget about the Red Sox long tale of woe. Forget the Boston-New York rivalry. Forget the decades of emotions and history that went into this series. Simply focus on the incredible fact that a baseball team just rallied from an 3-0 deficit to reach the World Series.

People always said that some year, a team would come back from being down three games to none. But they said it the same way they say there may be life on other planets, that Bigfoot exists and that the Cubs may get to the World Series. You leave it out there as a possibility, but you never really believe it.

Why would you? Baseball had played 100 previous postseasons heading into this October. In those, there had been 136 best-of-seven (or longer) series. And not only had no team ever come back to win the series after losing the first three games, none had even forced a seventh game. Only the 1999 Mets forced a sixth game. Only five teams before the Red Sox even forced a fifth game.

And then the Red Sox beat the Yankees four consecutive games.

"I know the city of Boston appreciates how hard this was,'' Game 7 winner Derek Lowe said, "because this was the best team in baseball for a lot of years and we had just lost by 11 runs to come back.''

"We knew we had to win Game 4, not because it was an elimination game but because winning it would put the ball in Pedro's hand for Game 5,'' first baseman Kevin Millar said. "And that would get the ball to Curt for Game 6. And then it would be Game 7 and anything can happen.''

Well, that makes it sound simple but it wasn't. In fact, the way the Red Sox rallied helps explain why we had never seen a team do it before. To do so requires you to pull out all stops and play every game as if it is the last, burning through so many pitchers that each victory almost makes the next one even more difficult.

"They weren't only willing to go out there on fumes, they were able to get people out,'' manager Terry Francona said. "We're not here celebrating if they don't get some people out.''

They did. After the Red Sox bullpen allowed 17 runs in seven innings in Game 4, the relievers allowed two runs the next 18. 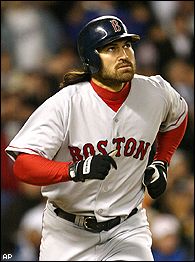 And while the pitchers were doing their job, the batters had to remain focused on theirs, not giving in to the incredible odds they faced, instead being patient with each at-bat, working the count, settling for singles, going the opposite way, never trying to do end the game with one swing. In short, they had to do everything the Yankees hitters did not once Boston's comeback began.

Millar, for instance, started the key ninth inning rally in Game 4 by leading off the ninth with a humble walk off Rivera. Then pinch-runner Dave Roberts stole second (after nearly getting picked off) to put the tying run in scoring position for Bill Mueller, who singled him home.

"I think that was the biggest play of the series, Roberts' stolen base,'' Lowe said. "It got us an opportunity to get to Rivera.''

By pushing Games 4 and 5 into nine extra innings, the Red Sox also were able to wear out the Yankees' pitching staff, setting up a seventh game when New York was forced to use several pitchers who simply weren't up to the task of shutting down Boston's lineup. Kevin Brown didn't make it through the second inning, Javier Vasquez gave up a grand slam on his first pitch and the Red Sox broke to a comfortable 6-0 lead that made things easier for Lowe.

After that, the only thing Boston needed was David Ortiz swinging the bat so well that Wilford Brimley should have been his manager, Mark Bellhorn slipping a three-run homer just over the right-field fence, Johnny Damon finally breaking out of his slump to become the first player other than Yogi Berra to homer twice in a seventh game and ... well, you get the point.

The Red Sox just became the first team in baseball history to rally from a 3-0 deficit in the postseason. And after watching how difficult it was, don't expect it to happen again for another century.