HOUSTON -- It will go right up there with the greatest October pitching performances no one ever saw.

Next to Walter Johnson in 1925. And Christy Mathewson in 1905. And all those other guys who forgot to wait for the invention of the satellite dish.

As 99.8 percent of America watched some game in Boston on an unforgettable baseball Monday in October, a postseason classic was unfolding in Texas -- before the eyes of, well, just about no one.

Inning after inning, an Astros pitcher not named Clemens or Oswalt filled the scoreboard with zeroes. That would be a gentleman named Brandon Backe. Sorry you missed him. But remember the name. You'll be hearing it again.

For 5 2/3 innings, Brandon Backe no-hit the best lineup in the National League. Over eight innings, he one-hit them. But that was just one remarkable story line in a remarkable October baseball game.

It began with Backe attempting to do his best Don Larsen impression.

It evolved into a remake of "Jack Morris vs. John Smoltz", starring Backe and Cardinals starter Woody Williams as two pitchers who refused to give up a run.

It ended on a Jeff Kent lightning bolt that will go down in history as the first walkoff homer to bust up a 0-0 postseason game in 55 years.

But that was merely the Cliff Notes version of Game 5 of the National League Championship Series: Astros 3, Cardinals 0 -- in a classic postseason baseball game that just about no one will ever tell their grandchildren they saw. Because they didn't.

"Hey, that's OK," said Jeff Bagwell, after his team's third straight win in a park where they have lost just one game in their last 23. "I understand the passion of Yankees-Red Sox. I understand why it gets all the attention. But we can walk into the World Series undetected, too. That's fine with me."

And in case you hadn't noticed, they just might.

Three days ago, the Astros seemed deader than Ulysses S. Grant. They were trailing this series, 2 games to zilch, against a team they once trailed in the standings by 20½ games.

True, they were coming home. But realistically, they needed to sweep all three games -- knowing Roger Clemens and Roy Oswalt could only pitch two of them.

Now, three days and three wins later, they're one victory away from the first World Series visit in the history of the franchise. And just as we all expected, they find themselves in that place because a guy named Brandon Backe pitched the game of his life under the glare of the glittering national spotlight -- well, minus about 48 states that were busy watching the Red Sox game, that is.

Backe hung around for eight innings -- the most he'd ever pitched in any big-league game. The only hit he allowed was Tony Womack's ground-ball single through the right side in the sixth.

Before this night, only two pitchers in history -- Bill Bevens (Game 4, 1947 World Series) and Mike Mussina (Game 6, 1997 ALCS) -- had ever spun off eight one-hit innings in a postseason game without at least getting a win out of it. But on Monday, Backe joined that eclectic little group.

It was just more proof that "wins" for pitchers can be, at times, the most misleading major stat in sports. But at least, unlike Bevens and Mussina, Backe's team eventually got a win out of it.

Before the last two weeks, the only experience Backe had ever had with October baseball was watching it on TV. But now, he said, "I'm in different shoes.

"This isn't on the tube," he said. "This is real. It's amazing to be out there, pitching in games like this and doing well in games like this. But that's what I'm supposed to do now. The way I look at it, I'm not doing anything now except my job."

He throws 94 miles an hour. He has two swing-and-miss breaking balls. He is still refining a nasty changeup. And the more he pitches, the better he gets.

He has started 12 games now, and the Astros have won nine of them. That includes two very big postseason games and the regular-season game in which they clinched the wild card. And nobody saw that coming -- not even the guys in his own clubhouse.

"You know, I'll be honest," right fielder Lance Berkman said of Backe. "After he'd been a reliever and they sent him down and then they brought him back to be a starter, I was thinking, 'What's this -- some crazy experiment?' But he's made a big-time believer out of me."

And not just him. Backe also has caught the attention of another Astros veteran, somebody you may have heard of (since he once played for both the Red Sox and Yankees) -- Mr. Roger Clemens.

After Backe's Game 1 start in this series, Clemens decided it was time to do for this 26-year-old rookie what men like Tom Seaver, Nolan Ryan and Don Drysdale once did for him. And that was to have a little conversation about what a kid with talent ought to be focusing his attention on.

"I don't want to make a big deal out of this," Clemens said Monday night. "But when I see kids who obviously have ability who start coming into their own like Brandon, I really feel like I have an obligation to do what I can to help them along. This kid has a chance to make a name for himself, not only with what he's done in the playoffs but what he might be able to do a little farther down the road."

What Clemens told him, Backe said, was that there are right ways and wrong ways to expend energy. And he'd lost sight of the right ways.

"I was wasting energy," said Backe, a converted shortstop who has never quite gotten over losing his chance to make it as a position player. "I admit that. I needed to get focused on putting all my energy toward pitching, instead of on stuff like running balls out (at the plate) as hard as I can. My main priority is supposed to be getting people out and not worrying about my hitting and stuff like that. And that's what Roger tried to get across."

Yeah, well, this guy apparently got the message.

He had a perfect game for 4 1/3 innings -- before a fifth-inning walk to Jim Edmonds. He threw so many strikes, he got through five innings in 20 fewer pitches than Oswalt had the day before. He inspired so many ugly swings, he even broke Albert Pujols' bat. And even after Backe gave up the hit to Womack, he regrouped -- because he knew, he said, "I had a chance to have something remarkable happen."

And something remarkable did, in fact, happen. But it wasn't only his doing.

Williams was just as good, even though he tweaked a hamstring running down the first-base line in the third inning. After seven innings, the two of them had given up two hits combined -- one apiece -- to two lineups that had scored 113 runs and hit 37 home runs in the first two weeks of this postseason. Hard to believe.

"You see so many things in the game of baseball, it's hard to be surprised by anything," Ausmus said. "But I'll admit it: I'm a little surprised that game was 0-0 in the eighth inning."

It was, according to the Elias Sports Bureau, only the second postseason game in history in which each team had just one hit through seven innings. (The other was a duel between Clemens and -- who else? -- Paul Abbott in the 2001 ALCS.)

And even though both starters eventually exited for pinch-hitters -- Williams in the top of the eighth, Backe in the bottom of the eighth -- it was still 0-0 entering the ninth. Since the epic Morris-Smoltz duel in Game 7 of the 1991 World Series, only one other postseason game had still been a 0-0 game when the ninth inning arrived (Mussina vs. Charles Nagy in the 1997 ALCS).

But as spectacular as the two starting pitchers had been, the defense behind them was just as good. There were a half-dozen sensational plays. But three loomed above the rest: 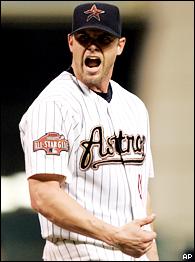