The Division Series hadn't even begun, and yet, the questions came from every angle to members of the Boston Red Sox. 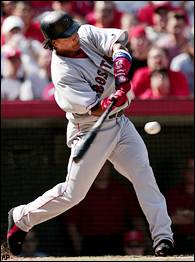 Do you think you can beat the Yankees this year?

Kevin Millar, never reluctant to share his opinion or shy about filling a notebook, didn't duck the queries.

The reference, of course, was a not-so-subtle reference to last year's American League Championship Series when the Red Sox had a three-run lead over the Yankees in Game 7 with one out in the eighth.

Then it all unraveled for the Red Sox, who've taken 51 weeks to get back to square one. The rematch begins Tuesday in the Bronx.

Let us count the reasons for Millar's optimism, one for every out not recorded last Oct. 16.

If you accept the theory that Arroyo and Lowe -- since exiled to the bullpen -- are a wash, the Red Sox have effectively switched from Burkett to Schilling, a sizeable upgrade.

Schilling entered this month with a career 1.66 ERA in the postseason. He dominated the Angels in Game 1 of the ALDS for six innings before tiring and allowing two runs in his final inning of work when the game was already decided.

He's battling an ankle problem that may require him to take a shot before every outing, but he did the same thing in the first half of the season and never saw much of a dropoff.

Remember, Schilling was the co-MVP in the 2001 World Series against the Yankees, and in his last start against them, just two weeks ago, he limited them to a single hit.

Not a bad trade up for the Red Sox, considering Burkett, who pitched well enough to help the Sox win Game 6 last year, retired after the season.

2. The Bullpen
The Red Sox got to within an inning or so of the World Series in 2003, and did it without ever really settling on a closer.

For the first two months, they experimented -- with disastrous results -- a bullpen-by-committee approach. Then, they turned to -- in order -- Brandon Lyon, Byung-Hyun Kim and finally, Scott Williamson.

This time, they've got Keith Foulke, who despite blowing seven saves during the season, was for the most part remarkably consistent. He blew five of his seven saves in two stretches, and otherwise was both reliable and durable.

Foulke didn't record his first career postseason save until Game 2 of the ALDS sweep of the Angels, but anyone who had any doubts about his ability to pitch in big spots had to be convinced when he struck out both Garret Anderson and Troy Glaus with the bases loaded in the ninth inning of Game 3, preserving a tie.

Like Mariano Rivera, Foulke thrives on work and can be used for multiple innings or in tie games.

The setup duo of Mike Timlin and Alan Embree were brilliant in the '03 postseason (opposing hitters were 1-for-35 against Timlin). And although Timlin coughed up the game-tying grand slam to Vladimir Guerrero in Game 3 on Friday, he was the key to the Red Sox's victory in Game 2.

3. The defense
The Red Sox are now better at three of four infield positions in the late innings of games than they were a year ago.

Orlando Cabrera is far steadier than was Nomar Garciaparra, with a more accurate arm and greater range. Mark Bellhorn is only a bit above adequate at second, but still gets to far more balls than Todd Walker. And first baseman Doug Mientkiewicz, who comes off the bench when the Red Sox are ahead, may be the best glove man in the American League.

Earlier in the year, the Red Sox consistently beat themselves by not making the necessary plays. They lead the league in unearned runs allowed and were next-to-last in fielding percentage.

But the swap of Garciaparra for Cabrera and Mientkiewicz overhauled the infield defense and instilled greater confidence in the pitching staff.

The Red Sox know firsthand how important it is not to give the Yankees extra outs. In their 1999 ALCS against the Yankees, a couple of misplays by second baseman Jose Offerman proved costly. In midseason, the Red Sox lost a game when a ball went through David Ortiz's glove.

Now, Ortiz sticks to DH and the infield has undergone a much-needed makeover. This Red Sox team may not beat the Yankees; but it's highly unlikely they'll beat themselves.

4. The bench
Seldom have the Red Sox gone into the postseason with as much depth as this year's model.

Outfielder Dave Roberts, one of the fastest players in the game, provides a nice pinch-running option in the late innings. The aforementioned Mientkiewicz makes all the plays -- and then some -- at first.

Reserve middle infielder Pokey Reese is a two-time Gold Glove winner at second base and capable of eye-popping plays at short, too.

About the only thing the Red Sox lack is a legitimate power threat in reserve (though Mirabelli hit nine homers in just 160 at-bats). Then again, with six players with 17 or more homers, how often do the Red Sox need to find sock off the bench?

5. The opponent
Despite winning 101 games, this is, in the opinion of many people in the game, the least impressive Yankee team of the Joe Torre era, especially in the pitching department.

The bullpen isn't as deep as years gone by. Sure, Tom Gordon and Rivera are still a superb duo. But if the Yankee starters falter, Torre and Mel Stottlemyre will have to hold their breath through the middle innings.