BOSTON -- A college student celebrating the Boston Red Sox's
come-from-behind victory over the New York Yankees was killed after a police officer called in to control a rowdy crowd shot her in the
eye with what was designed to be a non-lethal projectile.

Victoria Snelgrove, a 21-year-old journalism major at Emerson College, was hit by a projectile fired by an officer on
crowd-control duty. Snelgrove, of East Bridgewater, died of a head
injury at Brigham and Women's Hospital later in the day.

Witnesses said Snelgrove was standing outside the ballpark when a reveler threw a bottle at a mounted police officer. Another
officer fired the plastic, pepper-spray filled balls into the
crowd, hitting Snelgrove. Officials said the projectiles are not supposed to be aimed at people's faces.

"While I firmly and emphatically accept responsibilities for
any errors," O'Toole said at a news conference Thursday, "I also
condemn in the harshest words possible the actions of the punks
[Wednesday] night who turned our city's victory into an opportunity
for violence and mindless destruction."

Fifteen other people, including a police officer, suffered minor
injuries in Boston's Kenmore Square neighborhood early Thursday,
after thousands of baseball fans spilled onto the streets near
Fenway Park.

O'Toole and Mayor Thomas Menino pledged to fully investigate the
incident. Menino said he will seek cooperation from city colleges, bars in the Fenway Park neighborhood and the Boston Red Sox to help prevent future disturbances.

Snelgrove's father, Rick Snelgrove, expressed outrage and said
his daughter did nothing wrong. Standing outside the family home in
Bridgewater, he held up a photograph of his smiling daughter. 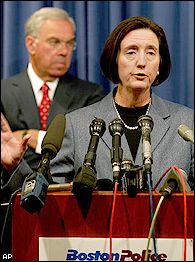 "What happened to her should not happen to any American citizen
going to any type of game, no matter what," he said. "She loved
the Red Sox. She went in to celebrate with friends. She was a
bystander. She was out of the way, but she still got shot. Awful
things happen to good people. My daughter was an exceptional
person."

Snelgrove transferred to Emerson from Fitchburg State College a
year ago and was a junior majoring in broadcast journalism, said
her academic adviser, Janet Kolodzy.

Red Sox pitcher Curt Schilling, speaking on WROR FM, said no Red Sox victory is worth such a tragedy.

"True Red Sox fans need to make sure we all grow up in the next several days," Schilling said.

Early Thursday, several small fires were set and numerous fights
broke out. Boston police reported eight arrests, mostly for
disorderly conduct, though one arrest was for assault and battery
on a police officer.

City officials had announced there would be a heavy police
presence in Kenmore Square for the history-making victory by the
Red Sox, who came back from 3-0 deficit to advance to the World
Series.

The city was caught understaffed when riots broke out after the New England Patriots' Super Bowl win Feb. 1, when one person was killed and another critically injured when a vehicle plowed into a
crowd of revelers.

Elsewhere Thursday, 29 people were arrested at the University of Massachusetts at Amherst after revelers threw beer cans and flaming toilet paper at police. And at the university's Dartmouth campus, about 2,000 people had to be dispersed by police using stun
grenades.

In New Hampshire, police made about 15 disorderly conduct
arrests as crowds swarmed the campus of Plymouth State University
and surrounding neighborhoods.

The new Boston Police Command Center has been in use as the Red
Sox advanced through the playoffs. Inside, police watch views from
50 cameras around the city as they coordinate with several
agencies, including State Police, the Boston Fire Department and
even some college police forces. It was first used during the
Democratic National Convention in July. The cameras were installed
on top of the ballpark and other locations.