CHICAGO -- When a pitcher is 43, has a locker next to a son in the same organization and has already retired once in his life, you have to look at every start as potentially his last. Such was the case when Roger Clemens left after the second inning of Game 1 of the World Series with a strained left hamstring. 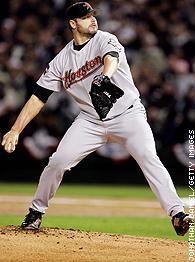 "I had the problem in the second inning and fought my way through that inning," Clemens said Saturday as he left the clubhouse after the game. "I came up here as quick as I could to take my sleeve off [the leg] and have them check it and see if there was anything I could do so I could continue. And the fluid already started to build up in my leg.

"So they gave me some medicine and I'm going to treat it and that's all I can tell you from here," he said.

How badly is Clemens hurt? He declined to speak in the room set aside for press conferences because he didn't think he could walk up the steps to the interview table. That's not a good sign for the Astros, who entered the World Series with the possibility that a 341-game winner could pitch in three games. Now they'll have to wait and see whether he's even capable of pitching again.

The Astros at least have starting depth with Andy Pettitte, Roy Oswalt and Brandon Backe.

Despite leading the majors in ERA, Clemens has been struggling with the hamstring over the past month or so. Game 1 marked the fourth time in his past seven starts that he has either lasted less than four innings or allowed at least five runs. Saturday's start matched the second shortest of his postseason career (two innings for the Yankees in the 1999 ALCS and 1 2/3 innings before getting ejected in the 1990 ALCS).

Clemens became the second oldest pitcher ever to start a World Series game, and he had a chance to become the oldest pitcher ever to win one. Instead, it was clear that something was bothering Clemens from the very start. He threw 25 pitches in the first inning -- including a ball that Jermaine Dye slammed over the right-center field fence -- and another 29 in the second inning. He was missing with a lot of his pitches.

"It affected the finish of his pitches more than anything," catcher Brad Ausmus said of the sore hamstring. "He really couldn't finish off his pitches."

"We haven't faced him in a while, so I don't know if he was on or off," White Sox center fielder Aaron Rowand said. "We just knew that we were getting some good pitches to hit, and guys were taking good swings off him. We had a pretty good track record against him when he was with the Yankees. Right now we're just going to take it for what it is, and that's a win."

With the game tied 1-1, Clemens gave up singles to Carl Everett and Rowand in the bottom of the second inning, followed two batters later by a double to No. 9 hitter Juan Uribe that gave the White Sox a 3-1 lead. He was able to gut through a 12-pitch at-bat against Scott Podsednik, though, finally striking him out to end the inning.

Podsednik was the 49th strikeout of Clemens' World Series career and the 4,675th strikeout of his overall career. We'll have to see if it was also his last.