HOUSTON -- Oh my. Astros fans must have really loved listening to the final inning of that game ... during their morning rush-hour commutes. 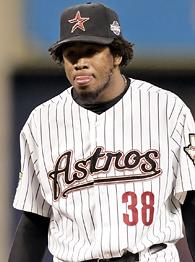 Houston waits 43 years for a World Series game and this is what the fans get? They endure four decades of painful seasons, heart-stopping playoff losses and some of the ugliest uniforms ever worn -- and this is their reward? They enter the ballpark for the first World Series game ever played in Texas, wearing all manner of retro-jerseys, killer bee costumes and 10-gallon hats with expectations so high that only NASA could measure them -- and this is the payoff? A Series record five-hour, 41-minute, 14-inning, babysitter budget-busting game in which Houston blew a 4-0 lead with its 20-game winner on the mound, stranded 15 runners, walked 12 times, gassed the pitching staff ... and lost 7-5 to the White Sox on a two-out home run by a former Astro to slide to the brink of elimination?

Sheesh. And fans thought it was bad when the Astros appeared in "The Bad News Bears in Breaking Training." At least Ezequiel Astacio didn't pitch for the Bears in that one.

"I'm a little exhausted and I hardly pitched," said Houston reliever Mike Gallo, who threw exactly five of the game's 482 pitches and faced exactly one of the 126 batters. "I may have to go home and get some cereal for breakfast.

"The fans certainly got their money's worth. I saw where tickets were going for $1,000. But at least we played so long it was like they got to see two World Series games."

Almost. The game tied the World Series record for most innings, broke the record for longest game in terms of time and ended just after 1 a.m. CDT. Oddly, these records did little to soothe Morgan Ensberg's frustration. "Great. We've got the longest World Series game and the longest playoff game?" the third said sarcastically. "Book us. That's awesome."

The Astros now are one loss from a sweep and if they lose tonight -- and only a handful of teams down 3-0 have even forced a fifth game -- they will spend the winter wondering what might have been with a clutch hit or two. They had the potential tying and go-ahead runs in scoring position in the eighth inning of Game 1. They led in the seventh inning of Game 2. They led Game 3 by four runs in the fifth inning but managed just one hit -- a game-tying double in the eighth -- in the final 10 innings and lost after Geoff Blum homered off the final reliever in the bullpen, Astacio.

"We've all played this game and we've all had heartbreaking losses," said Blum, who played for Houston in 2002-03, "but I can only imagine what it must feel like to lose a game like that at this level."

How does it feel? Ask manager Phil Garner. He slammed a chair against the dugout when Blum homered to right and still was steaming when he spoke with reporters. For good reason. The Astros walked 11 times, were hit by a batter and reached base on an error in the final seven innings, yet scored just that lone, game-tying run.

"That's some pretty poor hitting, absolutely rotten hitting," Garner said. "We had our chances. It's amazing. I don't know how you win a game when you can't hit the ball. We didn't even hit the ball good except for Jason Lane. We managed to stay in the ballgame but we might have played 40 innings and it didn't look like were going to get a runner across the plate."

So, how do you really feel, Phil? "I have a lot of emotions. I'm really ticked off."

And to think, it all started so well.

Starter Roy Oswalt won 20 games during the regular season, three more in the playoffs and appeared to be cruising with a 4-0 lead in the fifth inning Tuesday. Then he gave up five runs and threw 46 pitches in an almost inexplicable fifth inning that seemed to sap everything out of the Astros ... and sent baby-sitters all over Houston into overtime.

"I don't think that [fifth inning] leads to the loss," Ensberg said when asked to comment on that very issue. "It's difficult but ... I'm sorry, I'm having a tough time thinking right now."

Well, there was a lot of that going around. As inning after inning went by, Houston veteran Jeff Bagwell said he went up to the clubhouse whenever the White Sox were up, "Just to get a mental break. The playoffs are so taxing, you just have to find something to do, move around somehow, so you can take some time off."

Well, it beats slamming chairs against the dugout wall while your team strands runner after runner.

"We had a lot of guys on," Ensberg said, "but I felt there were only a handful of times that we had some actual scoring opportunities."

Oh, but they did. They left runners at second and third in the eighth after tying the game. They loaded the bases in the ninth (on three walks). They put runners at first and second in the 10th and 11th, and left runners at the corners in the 14th to end the game. One clutch hit somewhere along the line -- just one -- could have won the game. Instead, they watched Astacio give up the home run to Blum and later walk in a run in the dismal 14th.

Asked whether it was the toughest loss he's ever had, catcher Brad Ausmus replied, "No -- Game 7 of the NLCS against St. Louis last year."

Well, sure. The Astros and their fans have endured some tough, tough losses over the years. And long ones. They lost two potential pennant clinching games in extra innings in the 1980 playoffs. They lost in 16 innings in Game 6 of the 1986 NLCS. They lost Games 6 and 7 in the NLCS last year.

But this was about as bad as it gets in a non-elimination game. The Astros went through so many arms that even Nolan Ryan threw a pitch. Think of it this way: The defeat gives the Astros the rare chance to lose two World Series games in one day.

"Right now, we're just so frustrated," said closer Brad Lidge, who at least had a good outing after allowing walk-off homers in his previous two games. "When the game goes so long and you're at home, you feel like you're going to wind up winning it. But it's because they've all been so close like that that gives us confidence for tomorrow. It would be one thing if we were getting blown out and never had a chance. But we've been sooooo close. All we need to do is execute. And we're going to tomorrow."

Of course, they'll still have an uphill battle should they do that. Even if Houston wins tonight, its scheduled Game 5 starter is Roger Clemens, who has a strained hamstring and doesn't know if he can pitch again.

But, hell, at this point the Astros would love to deal with that problem.