HOUSTON -- They were almost all there Wednesday night, covering White Sox history as surely as Luis Aparicio covered the Comiskey Park infield.

There was Minnie Minoso, who played for the White Sox in the '50s, '60s, '70 and '80s, finally tasting victory champagne after all this time. There was Frank Thomas limping around the field with a smile as broad as Michigan Avenue, the broken ankle that ended his season in July suddenly just a little hurt. There was Geoff Blum, a White Sox for all of 97 days and 33 at-bats, but now as much a part of team lore as Disco Demolition Night. And there was Ozzie Guillen surrounded by so many worshipping well-wishers that you would have thought he was Oprah. And there were the die-hard Chicago fans crowded by the dugout and singing the Na-Na song loud enough to be heard above an L-train. And there was Harold Baines, who played for the White Sox after they retired his number ...

... Well, there was just about everybody but Shoeless Joe himself. Although given all that went on this postseason, you got the feeling that near a certain Iowa ballfield, the cornstalks were stirring, too.

"They may have to re-edit the whole movie and re-release it as 'Field of Dreams 2', " Blum said. "Only this time they'll have to replace those guys and have us coming out of the cornfields."

Hey, why not? These guys came out of nowhere, taking over first place on opening day with a 1-0 victory and completing their wire-to-wire run with another 1-0 victory over the Houston Astros for Chicago's first World Series championship in 88 years.

"I don't know what's happening in that cornfield -- I just want to know what's going on in Chicago," catcher A.J. Pierzynski said. "Shoeless Joe wouldn't be able to play after that party."

No kidding. As long as Chicago has waited for a World Series champ, even Cubs fans might join in this party.

If you want to know how big this was for the city, consider that Ozzie said he actually cried for Jerry Reinsdorf when the White Sox owner received the World Series trophy. When people cry for Jerry Reinsdorf, you know it's pretty overwhelming.

And definitely long enough that Dr. Phil couldn't have encouraged a group hug on the mound. 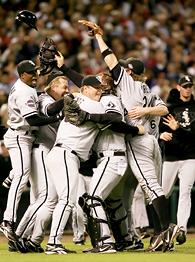 There have been a lot of painful moments in Chicago baseball since the White Sox 1917 World Series championship, but Minoso said Wednesday's victory "cleared everything in the past." Thomas said it didn't matter that he never played an inning in the World Series due to his broken ankle, that all he wanted to do was be a part of a champion and that he cried with joy for two innings after he simply stood on the foul line for the player introductions. Blum said the Wheaties people had been saving those commemorative White Sox world champions boxes for a very long time, "but stale or fresh, they're going to taste nice."

But of all the White Sox past and present, perhaps the player who best summed up the evening and the previous nine decades was the one who may never wear the Chicago uniform again, future free agent Paul Konerko.

"Players come and go, rosters change from year to year, but for the fans who have been with this team forever and the people who work for the organization, this means so much," Konerko said. "You know you're not just playing for a small group here. Eighty-eight years is a long time and you're playing with that weight on your shoulders. Ever since we beat Boston in the Division Series, we knew it was there. If we didn't go on and win it all, it would be just another year you failed."

The White Sox's wait is finally over though, thanks to Ozzie's managing, Freddy Garcia's seven scoreless innings, Jermaine Dye's two-out run-scoring single, Bobby Jenks' ninth inning and everything else from this year that will be remembered on the South Side long after the graffiti fades from the neighborhood walls.

And just in time, really. If they had waited any longer, you wouldn't be able to buy your commemorative championship shirts at Marshall Field's before the store changes its name to Macy's next year.