If Bud Selig was able to cut through FOX's over-amped broadcasts -- from the video game "whoosh" that accompanied every graphic, to Scooter the talking baseball -- he'd have realized Major League Baseball was officially called out on Wednesday. The commissioner will pretend he wasn't listening, but from across the Pacific, Bobby Valentine was issuing the kind of challenge that any marketing-minded league should love.

Valentine's Chiba Lotte Marines are now ready to conquer the world, or at least the White Sox. So said the former Mets manager, who's in his second year in Japan and just led his team to a four-game sweep of the Japan Series. No foreigner has ever managed into the final round, and the experience has clearly had an effect on Valentine. 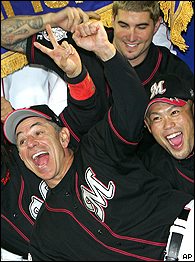 Not only is he proposing a true global championship series, he actually thinks the Marines can win. Crazy? It's anyone's guess, but Valentine told the Associated Press that after watching the White Sox and Astros on TV, he's sure his Japanese players would shock their major league counterparts.

"I can tell you the level of play is equal," Valentine said. "[The Marines] are as good as any team I've ever managed. I'd put them up against the winner of the World Series and I know we'd win at least a couple of games."

Valentine had his enemies, plenty of them, and he knows he's tweaking the very people who wish he'd stay in Japan forever, never to be heard from again. But if MLB is looking for more competition, better TV ratings -- and, sure, more money -- they should be listening. Bring Valentine and his tough little team to the U.S., and let him and Ozzie Guillen go at it for a week.

Two managers, all ego, no edit button, baseball hard-cores who live beyond the game's politically correct boundaries. A Valentine vs. Guillen war would be the perfect antidote to baseball's inability to hold its October audience.

Despite the month-long adrenaline rush America experienced during the wild-card races, everyone moved on. Going into Game 4 Wednesday night, the World Series had turned into FOX's nightmare: Ratings were down 30 percent from a year ago, and this Series was on its way to becoming the least popular TV event in the Fall Classic's history.

FOX tried everything to juice up the broadcasts, but the desperation just made the games louder and dumber. Maybe Scooter and the dirt cam created FOX flight. Then again, it might not be the network's fault. It could be that too many Yankees-Red Sox broadcasts sent the average fan fleeing into the arms of the NFL. Maybe out-of-towners are looking for someone new to root for -- or against.

Valentine is the perfect foil, and he knows it. By boasting that his mostly anonymous players are good enough to beat the planet's elite, he's harpooning the major league's very foundation. The Marines might be Japan's best team, but The Show draws from the rest of the globe's finest talent, from North and South America, the Caribbean, even Australia.

Valentine knows this. Of course he does. But there he is, ready to puncture the aura of the big league's superiority. How dare he, the game's guardians must be thinking. Is he really serious?

If Selig really wanted the major leagues to regain their strut, he'd take Valentine's call and make this happen, somehow, some way. Not now, maybe, but maybe next year. Designate the last two weeks of October to a real world series, and see who's boss.

Of course, there are a million obstacles in the way. To make room on the calendar, MLB would have to end the playoffs earlier. Same goes for the regular season. That would meaning shortening the schedule to 154 games -- a suggestion that's already been soundly rejected by the owners.

The other problem is getting the players to take this series seriously. Nationalism alone doesn't seem to resonate among most American-born players, as many of them have suggested next year's baseball World Classic will be treated as nothing more than a glorified March exhibition.

No matter, says Selig. The baseball community will finally have the tournament he's worked so hard to choreograph. That's why, when asked about Valentine's challenge, the Office of the Commissioner swatted it aside like a corporate gnat.

"We've got the World Classic," an MLB spokesman said. "This [other event] hasn't been talked about."

Maybe it's time to reconsider, considering the kind of roll the White Sox are on. After nearly collapsing in September, they demolished everyone in their path, including the Indians, Red Sox, Angels and Astros. The small riot that erupted on the pitcher's mound after the final out of Game 4 told you the White Sox were convinced that the world was theirs.

Everyone was high-fiving and delivering thunderous back slaps and the clubhouse was soon under celebratory siege. Through the partying, though, was a voice thousands of miles away, telling the Sox their championship run wasn't yet complete.

"It's time to do battle," Valentine was saying. Somehow, this doesn't even sound corny.