ST. LOUIS -- The fans in Busch Stadium stood and roared in the first inning at the introduction of Albert Pujols, who ascended from the status of popular All-Star ballplayer to living god here with his monstrous home run against the Astros on Monday. He strolled to the plate, flashbulbs popping.

Roy Oswalt was not among those worshiping, however. The Astros right-hander threw two fastballs and a cutter to get ahead one ball and two strikes, and then he pumped a 95-mph fastball up and in, which, when thrown to Pujols, is like reaching for an alligator's tonsil: You just don't do it. 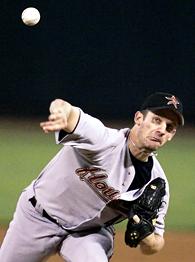 But Pujols was overpowered, swinging feebly, striking out, and Houston catcher Brad Ausmus thought: Oswalt's got it.

Oswalt was brilliant and St. Louis starter Mark Mulder was much less than that, a simple dynamic that ended any chance of a Cardinals' comeback in the National League Championship Series. Oswalt allowed a run over seven innings in Houston's 5-1 victory in Game 6, and he was named the Most Valuable Player of the NLCS afterward. For the first time in the Astros' 44-year history, Houston will play in the World Series.

The aroma of champagne-laced alcohol accompanied Oswalt into the interview room. When somebody asked Oswalt to sum up his emotion, teammate Craig Biggio interjected with a grin: "He don't have any emotions."

Nothing seemed to bother Oswalt, nor any of the Astros. On the flight from Houston to St. Louis, after Pujols' stunning home run in Game 5, the pilot -- cued by some member of the team, in all likelihood -- announced that if you looked out the left side of the airplane you would see Pujols' home run zooming past. The players laughed, as loose and circumspect as ever, something that Morgan Ensberg believes has roots in the team's 15-30 start in April and May.

It was as if the team was a patient that experienced a near-death experience: Everything after that seems easy. Nothing could be as hard as that time. "You really have to understand what it feels like to be 15-30," said Ensberg. "When you're in your car, you're out of it. You're not even thinking about .500. You're thinking, can we win tomorrow?"

Pressure? Hah. Because of the hole they dug early in the season, "every game we've played since April has been a playoff game," said Ensberg.

And, as Garner mentioned, it helped to have Oswalt pitching, driving off the rubber, launching his wiry frame at the hitters, throwing lightning bolts that reached speeds up to 97 mph. Mulder threw well early, but after Ausmus opened the third inning with a single to left field and Mulder had to work from the stretch, he was never the same, allowing two runs. The lead, Oswalt said later, liberated him in his pitch selection.

Overnight, his wife had had a dream that he beat the Cardinals 1-0. "I hope it's not that close," he said to her. Now that Houston had a 2-0 advantage in the third -- 3-0, after they tacked on a run in the fourth -- he just kept attacking the St. Louis hitters with his fastballs, four-seamers and two-seamers, devoted to the idea that he would not allow any walks. He challenged everybody, from Pujols to Reggie Sanders to Larry Walker, rarely even showing his off-speed stuff.

The Cardinals didn't get their first hit until the fifth inning, an opposite-field single by Yadier Molina, and they mustered only three hits over Oswalt's seven innings. Later, St. Louis manager Tony La Russa was asked about whether the team had played with enough fire, and La Russa smiled slightly at the question. "All it was was this: Oswalt shut us down," La Russa said. "We were ready to play. That guy was outstanding, and he shut us down."

Ausmus said, "He doesn't get as much attention as Roger [Clemens] and Andy [Pettitte], but I promise you the hitters who've faced him know who he is."

Oswalt needed one more out to finish the seventh and with his pitch count at 114, Oswalt emptied the tank against the next hitter, So Taguchi, throwing him a fastball at 94 mph and then another at 96 mph. His final pitch shattered Taguchi's bat, resulting in a little dribbler to the right side. After Oswalt covered first to make the last out, a batboy hustled out of the St. Louis dugout and retrieved the handle, and then the barrel.

And then the batboy with CARDINALS 05 on the back of his jersey scanned the dirt around home plate for shards, seemingly the last pieces of St. Louis' season left there by Oswalt. The Cardinals dominated the regular season, they beat Pettitte and even Brad Lidge, but they had nobody who could match Oswalt.

Chad Qualls threw the eighth inning, Dan Wheeler the ninth, and as Molina came to bat with one out left in the game, some of the Astros were poised at the top of the dugout, Clemens shifting back and forth nervously in a jacket, Biggio smiling, Jeff Bagwell waiting placidly. With every pitch by Wheeler, the stadium filled with popping flashbulbs, fans wanting to capture the last pitch thrown in Busch Stadium.

Molina lifted a fly ball to right field, and the Astros began tumbling out of the dugout, rushing onto the field, to a moment that, five months ago, could have only been in the farthest reaches of their imaginations.