You think this prediction game is easy?

Here's how easy it is:

Last week, we polled a bunch of general managers, assistant GMs, scouts and players to see which team they thought would win the World Series. 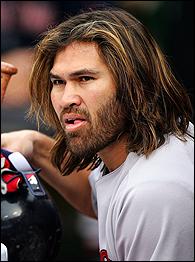 And their choice was ...

Well, it seemed like a good idea about five days ago.

For some reason, though, the Indians' chances don't look quite as attractive right now as they looked last week. So allow us to tell you which team replaces them as the clear choice of baseball people everywhere to win this thing:

"If you poll eight people, you might get eight different picks," said one assistant GM.

"This is the toughest year to call," said another assistant GM. "I don't see a huge separator anywhere on the map."

Yes, the more you look over that map, the more you want to call the auto club for directions. But this is the time for bold columnists to step up and tell you what's about to go down. So here goes. The winner of the 2005 World Series is ...

The Houston Astros. And here's why:

They're the "Miracle" Braves
In the history of baseball -- before this year -- only one team has ever been 15 or more games under .500 at any point in any season and gone on to play a postseason game.

But now those Miracle Braves have company, thanks to these 2005 Astros.

This team was 15-30 on May 24, 14 games behind the Cardinals and 11½ out in what was then a complete wild-card free-for-all. But since that date, the Astros are 74-43. And how many teams in either league have a better record since then?

But May 24 isn't just a random date on the calendar for this team. After that date, Andy Pettitte moved back into the rotation and stayed healthy. The Astros finally put together a set rotation, by establishing Wandy Rodriguez as an acceptable fifth starter. And May 24 happened to be the last day under the Mendoza Line for Lance Berkman, as he gradually found some decent Rustoleum on the way back from offseason ACL surgery.

They're the 2001 Diamondbacks
Only once in the division-play era -- if we toss out the goofy split-season 1981 strike year -- has any previous team entered the postseason with starting pitchers who ranked 1-2 in their league in ERA.

You might remember that team. It was those 2001 Arizona Diamondbacks, fronted by the terrifying tag team of Randy Johnson and Curt Schilling.

Does anybody think that team would have won a World Series without Johnson and Schilling? Arizona won 11 postseason games -- and those two guys won 10 of them.

But now along come these 2005 Astros to try out the same formula.

That's the biggest gap between two teammates and the next-closest finisher in an ERA race since 1931, according to the Elias Sports Bureau. That's a lonnnng time, folks.

We don't need to recap how dominating Clemens has been this year. You might have heard that someplace before. But what a lot of people have missed is how en fuego Pettitte is these days.

"He's not throwing the cut fastball as much," said one scout. "So he's not a one-dimensional pitcher anymore. He uses both sides of the plate. He always had a great angle to home plate. And he's healthier. That's the biggest thing. He's finally healthy."

They're the '95 Braves
Before we get too carried away comparing these Astros with those 2001 D-Backs, let's remember something: That Arizona team had a tough time scraping any starter together besides Johnson and Schilling whom it felt like running out to the mound.

The Astros, on the other hand, have a guy hanging around, ready to start Game 3 against Atlanta, who is the answer to one heck of a trivia question:

Who's the only pitcher in baseball to win 20 games in both of the last two seasons?

That would be the great Roy Oswalt, friends. And there's a reason Oswalt has outwon Pettitte and Clemens these last two years -- and by that, we don't mean luck.

"Oswalt's stuff is better than either of them," said one scout. "If they have to go out and win a game, Oswalt is the guy I'd put out on the mound."

All Oswalt did was finish sixth in the National League in ERA, giving Houston three of the top six. And that means the team these Astros might compare most closely to is not the 2001 Diamondbacks, but the 1995 Braves World Series winners -- who had Greg Maddux, Tom Glavine and John Smoltz all finish in the top seven.

One assistant GM's review of Clemens-Pettitte-Oswalt: "Perhaps the best postseason 1-2-3 of my lifetime."

They're the 2004 Red Sox
We know there are no living Americans outside of Houston and St. Louis who can even verify there was such a thing as a National League Championship Series last year. But historians tell us that, while you were busy watching New York-Boston, that NLCS really did happen. No kidding. 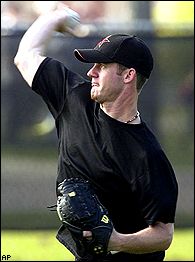 It may be true that the Astros didn't do any collapsing to compare to the New Yorkers in that other league. But the Astros did blow a 3-games-to-2 lead in that series -- and lost Game 7 after handing Clemens a quick 2-0 lead.

Over the previous 10 years, Clemens was 140-2 when he led by two runs at any point. But he couldn't hold this one. And that loss creates a sense of unfinished business that will hang over not just this team, but Clemens himself.

Not that you can always count on second chances working out. But in the 10 years since baseball went to this three-tiered postseason format, only one previous team lost an LCS Game 7 and then made it back to the postseason the next year.

That team was the 2003 Red Sox. And if we need to remind you what they did the following October, well, uh ... have you heard about that Michael Jackson trial?

They're the 1988 Dodgers
You can never spew out enough pure unadulterated pathos this time of year. And for evidence, we refer you to your video machine, where you should now spin a little footage of Kirk Gibson in October 1988.

Well, these Astros have the perfect equivalent to Gibson -- a fellow named Jeff Bagwell.

He's probably the greatest Astro in history. He may never be the same again after shoulder surgery in May. And he can't even play the field.

But Bagwell can still march up there to home plate in a big spot, as tears well in the eyes of Houstonians everywhere. And when he gets there, he is still capable of delivery a Gibsonian kind of moment.

In his last 13 regular-season plate appearances, Bagwell either reached base or drove in a run in seven of them. So cue those violins.

They're the 1997 Marlins
There were a bunch of reasons the '97 Marlins won the World Series -- most of which (sorry, Eric Gregg) we won't get into. But one big reason they won is that they could throw a closer out there late in games who was a monstrous strikeout machine.

That Marlins closer was Robb Nen, who caused a stir in that Series for, among other things, throwing a pitch which the scoreboard claimed was 103 miles per hour.

His Astros equivalent, all these years later, is the almost-always-untouchable Brad Lidge, whose strikeout feats out of the bullpen are turning into truly legendary stuff. But the best one is this:

Over the last two seasons -- his only two as a closer -- Lidge has piled up 260 strikeouts in 135 1/3 innings. And only 43 starting pitchers in the big leagues have more than that. Lidge has more punchouts in that time than Mark Mulder, Derek Lowe, Kerry Wood, Brad Penny or Kris Benson -- just to name a few.

Outside of Mariano Rivera, there is no more dependable closer working in this postseason.

"Jason Isringhausen isn't in that category," said one scout. "Frankie Rodriguez is good, but not like that. Trevor Hoffman can still do it -- but not dominate the way this guy can. There's nobody more dominant than Brad Lidge. Nobody."

They're the '02 Angels-'03 Marlins-'04 Red Sox
In other words, these Astros, for all their offensive limitations, are the wild-card team in a wild-card world. And the facts are the facts:

In the 10 years since the wild card came into our lives, the team with the best record in baseball has won the World Series only once (the 1998 Yankees). But wild-card teams have won it four times, including three in a row, and at least reached the World Series six times.

Wild-card teams have now played in 38 postseason series -- and won 22 of them. So as long as baseball chooses not to penalize them with the loss of anything more than one home game per round, that wild-card route is the way to go.

They're not the Cardinals, Braves, Padres, Yankees, Red Sox, Angels or White Sox
OK, here's the best reason of all to pick the Astros -- because it's so easy to find reasons why those other seven teams in the field won't win.

• The Padres have the worst record of any playoff team in history (82-80) -- and got outscored by their opponents this season by (yikes) 42 runs.

• The Braves lost 12 of their last 19 games. Andruw Jones went 4 for 47, with three RBI and no extra-base hits, after hitting his 50th homer. John Smoltz will have started once in 20 days before his Game 2 start in the NLDS. And the Braves have lost three straight Division Series by losing Game 5 at home.

• The Red Sox have a 4.74 team ERA -- which would be the second-highest in history by a World Series winner. Their 5.17 bullpen ERA was the worst in the American League -- and almost a run and a half higher than last year's bullpen (3.87). And "unless you have three stud starters," said one NL exec, "bullpens win or lose short series. But they don't have three stud starters this year."

• As great as the Yankees have played lately, they drew the worst possible matchup in the Angels, who are 11-8 against the Yankees and 7-5 in Yankee Stadium over the last two years. Plus, said one AL scout, "they can only use Randy Johnson once in a five-game series, but the Angels can use [Bartolo] Colon twice."

• The Cardinals will, and should, be the NL favorites. But lots of people we surveyed thought their pitchers were out of gas, their bullpen was thin and their lineup wasn't nearly as deep. They hit 44 fewer homers than last year, stole 28 fewer bases, scored 50 fewer runs and were down 37 points in slugging. "So if teams can create a situation where they can pitch around [Albert] Pujols," said one scout, "they're in trouble."

• Finally, while we think the Angels will get to the World Series, they hit fewer home runs (147) than any of the eight playoff teams except San Diego. They drew 206 fewer walks than the Red Sox. And outside of Vladimir Guerrero and Garret Anderson, no hitters on their roster drove in 70 runs or hit more than 15 homers. "They really have to scratch and small-ball you to death," said one scout. The other bad precdent: The Angels won the AL West this year -- and they've never won a single postseason series in a season in which they finished first. (The year they won it all, in 2002, they were -- what else? -- a wild-card team.)

So there. It has to be the Astros.

But they might bring as many dominating starters to this postseason as all the other teams combined. And that's good enough for us.

"I'm not going to tell you they're guaranteed to win," said one scout. "But I can guarantee you this: I don't think any team wants to play this club."