HOUSTON -- So what will they tell their grandchildren about the longest postseason game ever played?

Will they start with the final, unlikely hero -- a semi-anonymous extra man named Chris Burke -- the pinch-runner who wound up hitting the Aaron Boone-esque home run that ended a series for one team and a season for another?

Or will they start with the home run that tied this game -- with two outs in the ninth inning, of course -- a home run that was gone by about half an inch, a home run launched by a catcher (Brad Ausmus) who had hit three homers all year? 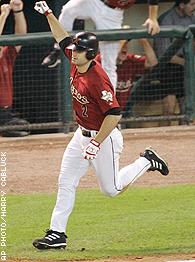 Will they talk about the second grand slam of the first two-slam game in October history -- the eighth-inning Lance Berkman shot that helped transform a blowout into one of the most unforgettable baseball games ever played?

When the Houston Astros and Atlanta Braves work up the strength some day to tell tales of the Game 4 epic that ended their National League Division Series on Sunday, they won't know where to start. They can't possibly know where to start. It was all too much to absorb. Way too much.

But here is where we would start if we were them:

Long after everyone in attendance forgets the score of this game (Astros 7, Braves 6 -- in case you already have), they will remember the sight of a 341-game winner sitting in the bullpen, all alone, waiting for his moment.

They will remember the chills that reverberated from their toes to their armpits in the top of the 15th inning, as the great Roger Clemens arose to warm up -- for his first relief appearance in 21 years.

They will remember Clemens sprinting out of the bullpen to the dugout in the middle of the 15th, and the way their ears hurt from the pandemonium that sight unleashed.

They will remember Clemens stomping toward home plate to make the (gulp) first pinch-hitting appearance of his entire career -- all 286 years of it -- because there was literally no one left to pitch or hit.

And they will remember the Rocket finding yet one more breathtaking exploit to add to his seemingly limitless legend -- by spinning three astonishing innings of one-hit, four-strikeout, 44-pitch relief until he wound up as (what else?) the winning pitcher.

"He might have thrown 10, 20 innings -- and I'm honest with you when I say that," said Houston's Phil Garner, a man who managed with his hair, cap and spikes on fire all afternoon long. "I think he was prepared to do whatever it took. And that's the way the man is. I've never seen anybody like him. He's amazing."

You would need to have a long memory, or be a voracious baseball historian, to recall the only slice of postseason life that compares with this one. It occurred 81 years ago, when a 377-game winner named Walter Johnson emerged from the bullpen to pitch the ninth, 10th, 11th and 12th innings in the seventh game of the only World Series the Washington Senators would ever win.

We are now in our 101st baseball postseason. No other pitcher with as many wins as Clemens has ever made a relief appearance in a postseason game -- let alone won one.

It was a feat that took your breath away about 50 times -- even if you were watching from the other dugout.

"This has got to rank right up there with anything he's ever done," said the Braves' ever-classy John Smoltz. "Look, we've all come back on three days' rest before. But he's forty-three."

He's 43, all right. But this was not one of those days where anyone was allowed to count their ages, their batting averages or the number of runners they'd left on base. It was one of those days that summed up the beauty of October -- because all that mattered was survival.

So Phil Garner burned through 23 of his 25 players (everyone but Andy Pettitte and Roy Oswalt), tying the all-time record for a postseason game. He was out of position players by the 13th inning. He was out of relief pitchers when he sent Dan Wheeler in to work the top of the 13th.

Which meant that if this game kept on going, Garner's next move was going to be one that would put a stamp on this game in indelible ink.

Oswalt had pitched the day before. Pettitte had to start Monday if there was a Monday. So this one was coming down to the Rocket.

It was about the eighth inning, Garner said, when Clemens walked to the end of the dugout and announced, "I'm ready to go." But Clemens had already begun gathering himself for this moment.

"You know, when it got late, Phil looked at me," the Rocket reported. "There's been three or four times throughout the year he asked me how I felt (if) I was swinging the bat or if I got my spikes handy. I didn't think he was serious, and he probably wasn't. But the look that he gave me this time was very serious. There was no kidding around with it. And so I got out to the bullpen."