HOUSTON -- How do they win these games? How are they winning this series? How can the Houston Astros possibly be one win away from finally escaping the dreaded Teams That Have Never Played In The World Series Club?

They won another one of their classic Games That Couldn't Be Won on Sunday -- a 2-1 Houdini special over a team from St. Louis that still isn't too sure what is happening. 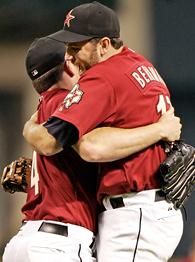 They won it by surviving a terrifying ninth inning that had a limp Craig Biggio saying afterward: "If I didn't have a heart attack tonight, I guess I'll never have one."

They won it by turning a game-ending double play that no one in the state of Texas thought could possibly be turned.

They won it because, like Francis Ford Coppola, the Astros never run out of scripts. Coronary-inducing, brain-frying, imagination-defying scripts. One after another.

Walk-off homers. Eighteen-inning journeys along the October tightrope. And now this. Just another thriller from the warped minds at Houston Astros Productions.

"We love games like this," laughed catcher Brad Ausmus, with just a slight roll of the eyes. "We wouldn't want to win one 10-1 or anything."

Heck, no. Why would they? When you win the way they win, it's way more interesting.

A mere one month ago, these Astros trailed St. Louis in the standings by 16 games. But here they are now, on the verge of booting those same Cardinals right out of the great Octoberfest.

So Houston leads this series 3-1 now. And of the 69 previous teams to find themselves in a situation like that in any best-of-seven postseason series, 59 went on to win.

But none of those other 69 teams had Andy Pettitte, Roy Oswalt and Roger Clemens lined up to start the next three games. These Astros do. Which means they're in a slightly more attractive position than they were in a year ago, when they were also one win away from the World Series -- and had (ahem) Pete Munro lined up to pitch.

"We know it's not over, but it is a great feeling," said Biggio, a guy who has lived through five previous Octobers that didn't have a happy ending. "Our team is based on that -- on the Big Three and our bullpen. We've got a Hall of Famer [Clemens], a 20-game winner [Oswalt] and one of the best left-handers of all-time [Pettitte] going. It's a nice problem to have."

Well, it's definitely a nicer problem to have than the crisis they concocted in the ninth inning Sunday, anyway.

Just since Sept. 1, the Astros have gotten mixed up in 23 games decided by one or two runs. They clearly can't take much more of this. So as they got ready to head out onto the field to try to hang on to yet another hairy one-run lead, Lance Berkman turned to teammate Chris Burke and said: "How about a 1-2-3 inning right here."

"That would be awesome," Burke replied.

And it almost seemed possible, too -- seeing as how, over the past 2½ years, the Cardinals were six for their last 89 off trusty Houston closer Brad Lidge, with 40 strikeouts.

So naturally, Berkman chuckled, "Next thing you know, it's first and third, nobody out."

"All you're trying to do right there is trying to hold it together," said Ausmus. "I mean, I know Brad can get himself out of these situations, because he's Brad Lidge. He's capable of striking out three guys in a row any time. But in the back of my mind, what I'm really thinking is, 'OK, if we can hold them to one run, at least we have the last at-bat with the game tied.'"

Right. And all the Cardinals had to do to get that tying run, theoretically, was make contact. The bad news for them was that the next man to the plate, Reggie Sanders, had faced Lidge seven times in his career -- and struck out in six of them.

You could soon see why. Lidge promptly ripped off two ferocious sliders. Sanders missed both of them from here to Galveston. And it was 0-2. But Sanders dribbled slider No. 3 up the third base line. And immediately, Pujols broke for the plate.

This was where, in those previous seven Astros postseasons, Morgan Ensberg's throw home would have conked Pujols in the helmet, caromed all the way to Yao Ming's living room and allowed 13 runs to score. But no. Not this year.

Ensberg steered the throw over Pujols' shoulder. Ausmus applied the tag. Out at the plate.

But for the Astros, the euphoria over that big development lasted for about 2.6 seconds. Pujols had slid into Ausmus' big toe. So the catcher did a little limp up the line in pain and then flipped the ball back to Lidge. Walker listened hard, never heard anyone call time and burst into third. He was called safe. So somehow, it was still first and third.

"I'm not sure what happened," Lidge said. "I came over to Brad and said, 'Are you all right?' I was assuming -- I think we all were assuming -- that time was out. The umpire [embattled home plate ump Phil Cuzzi] even came out and brushed off the plate. And I don't know why he'd do that if time wasn't out."

"I never did see Walker run for third," Ausmus said. "I heard a noise. I turned around. And there he was, on third. Great play by him."

The Astros tried arguing that no one had heard their calls for time. But the call stood. And unlike the team they were playing -- which was immersed in full-scale bad-umpiring meltdown by that point -- the Astros never did allow pandemonium to ensue.

But they still had two more pressure-packed outs to get. And the next hitter was John Mabry, the same guy who just the day before had doubled in the first postseason run Lidge had allowed in 11 appearances, covering 16 1/3 innings, over two Octobers.

Mabry also fell into an 0-2 pit, as 43,000 people stood, waved their festive white Astros towels and did their best mega-decibel imitation of a NASA launch.

So Lidge reached back and tried to finish him with a fastball up in the zone -- the same pitch Mabry had taken an ugly hack at the pitch before and came as close to blowing out his rotator cuff as hitting it.

But he thunked this one softly toward second base. And a million thoughts raced through a million heads.

Not one of them, however, contained the phrase: "Double play. Game over."

"My first instinct, when the ball was hit, was to yell, 'Go home,'" said manager Phil Garner.

"I didn't think there was a chance of a double play," said Ausmus.

"Did I think we could turn two there? No. Never," said Adam Everett, the shortstop who would have to turn it.

"I wasn't thinking double play because I don't normally get a lot of double plays," said Lidge.

And this is where we need to observe: Hey, good point. Lidge faced 137 hitters this season with runners on base. Know how many double plays he induced? How about one?

Second baseman Eric Bruntlett, just inserted for defense in the ninth, decided his only play was to try for two. So he made an astounding feed to Everett.

"Best feed I had all year," Everett said. "It didn't seem like the ball even touched his glove."

Everett then sucked up that feed, whooshed across the bag and unfurled the DP relay throw of the century.

"That," Bruntlett said, "was the most incredible turn I've seen all season."

How that throw beat Mabry to first, we'll never understand. It seemed as if he was two strides from the bag when Everett released the ball. But here it came. And here Mabry came. And somehow, some way, the throw arrived before Mabry did. About a thousandth of a second before. But that was all it took. Double play. Game over.

"Everything had to be perfect," Everett said. "And it was. It felt like everything was going in slow motion. I don't know why, but it did."

Ah, but we know why. It felt like slow motion because it didn't feel like real life. It felt like one of those schlocky Hollywood renditions of the final out of the biggest game in franchise history. He can't be out. He won't be out. (Gulp.) He is out.

"I've never been that excited to see a double play turned in my entire life," said Berkman.

"I can't even describe the feeling," Everett said. "Unbelievable. To do that, at that moment in time, it's just a tremendous feeling."

And when it was over, the Astros erupted in a tidal wave of pure, how'd-we-do-that? emotion. With leaps. With hugs. With screams. With smiles. With goose bumps. Oh, and with one more thing: relief.

"That's an incredible feeling -- to go, in the blink of an eye, from a tie ballgame where who knows who's going to come out on top to I-can't-believe-we-just-turned-that-double-play-and-the-game's-over-and-we're-up-3-to-1," said Berkman. "That's one wild swing of emotion right there."

How did they win this game? How can they be ahead in a series in which they have more wins (three) than hits with men in scoring position (two -- in 31 at-bats)?

"Well," Biggio retorted, "how do you come from the situation we were in to the position we're in right now? ... Our whole season has been like this."

And now they head back to the ballpark Monday night to see if they can add one more chapter. If they win, it will carry an ironic subplot for Biggio himself. On Sunday, he played his 34th postseason game, which tied a record previously held by Edgar Martinez -- for most postseason games in history by a man who has never played in a World Series.

If the Astros win Monday, though, it means Biggio will never break that record. And there would be something truly poetic about that.

The trouble is, what can they do to top that script from Sunday? Get no-hit by Chris Carpenter for 8 2/3 innings, then score five with two outs in the ninth to win? Come from 11 runs down and win in 29 innings? Activate Nolan Ryan and have him pitch the ninth?

Sure. Why not? With this team, anything literally is possible.