HOUSTON -- As the baseball soared through the electrified night, you almost wanted the world to stop spinning -- just for a moment -- so you could digest what was unfolding before your eyes. 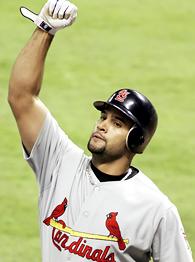 But it was a swing, a baseball, a moment that seemed to change the world.

In an instant, in one click of a camera lens, in one quick gulp of air, in one flash of Albert Pujols' bat, victory dissolved into defeat. Euphoria transformed into disbelief. Eardrum-rattling noise turned to how'd-that-happen silence.

And the Houston Astros' trip to the first World Series in the life of their franchise had just taken an unexpected detour -- back to a nearly defunct stadium in St. Louis that had been abruptly rescued from the implosion button for one more night of baseball. Or more.

What just happened? Did we really see what we just saw?

We could have sworn we saw the great Albert Pujols hit a season-saving three-run home run off the unhittable, untouchable, unbeatable Brad Lidge. With two outs in the ninth inning. But were we sure this was real?

These are questions you always ask yourself at moments like this, when the impossible has just turned possible. So it shouldn't surprise us that even Pujols' teammates, men whose lives had just taken a ride right along with that home-run ball, were feeling the same thing.

"When he hit that ball, I didn't react," said the man on deck, Reggie Sanders. "I didn't react, because I didn't know what to do. I couldn't believe he just did that. So I froze. I just froze."

How long will we talk about a game in which the St. Louis Cardinals, one strike away from the fishing hole, would save their season with a staggering 5-4 victory over the Houston Astros -- and a pitcher they kept calling "the best closer in the game"?

"I know we'll be talking about it for a long time," said the Cardinals' Larry Walker late on a pulsating Monday night, his retirement plans suddenly delayed by Pujols-esque forces beyond his control. "But I think it will get talked about a lot more if we win two more games."

Two more games. That's how many the Cardinals still need to win in this National League Championship Series.

But it seems eminently possible now. Doesn't it? When you've witnessed what you've just witnessed, anything seems possible. Anything.

And just like Albert Pujols, the team Henderson was losing to (in that case, the Angels) was about to head for the first World Series in its history -- and celebrate it in front of its very own fans.

The only difference is that, after Henderson's homer gave the '86 Red Sox a one-run lead, the Angels came back to tie the game in the bottom of the ninth, only to lose in 11.

But details, schmetails. It's close enough to know that Albert Pujols' home run will be traveling through the history books for as long as October matters.

We can still recall the two teams in those history books that were one strike away from going home -- and then didn't: We remember those 1986 Red Sox (thanks to Dave Henderson). We remember the 1986 Mets (thanks to Mookie Wilson and Bill Buckner).

And we'll remember this -- no matter what happens this week in St. Louis.

"Now I can appreciate Joe Carter and Kirby Puckett and all those guys," said Sanders. "Because this was the exact same thing."

OK, so it wasn't the exact same thing. But we get the idea. Because these take-your-breath-away October home runs don't happen every day. And when they do, they stick inside all of our memory banks for as long as the banks stay open.

So what will we remember about this night?

We'll remember Lidge sprinting out of the Houston bullpen at 10:24 Central Daylight Time, as an entire stadium rattled.

We'll remember Lidge striking out the first two hitters in the ninth -- John Rodriguez, then John Mabry -- on two carnivorous sliders. We'll remember that the sound that erupted after those two strikeouts was so monstrous, you needed a Richter Scale to measure it.

And we'll remember, as much as anything, the peskiest leadoff man alive, David Eckstein, walking up there and taking two 96-mph smokeballs for the strikes that left his team one strike away.

But as grown men and women shrieked and leaped and hugged all around him, Eckstein took a deep breath and stepped back in to hit, feeling amazingly serene.

"The one thing I didn't want to do was get into any type of jumpiness," Eckstein said. "Any type of anything in my body besides just focus on the baseball. And it's pretty calming to step into at the plate in that situation. I have no idea, no reason why."

His teammates, watching him, were shockingly calm themselves. David Eckstein just has that effect on people.

"When David gets two strikes, you still know he'll put the ball in play," said Walker. "David doesn't have bad at-bats. Ever."

And he didn't have one here. Lidge tried to put him away with one final slider. Eckstein slapped it toward the left side. The third baseman, Morgan Ensberg, lunged. But the baseball, somehow, veered just beneath his dive. And the Cardinals were alive.

Next was Jim Edmonds, the same Jim Edmonds whose ejection the day before had been the talk of baseball for the next 24 hours. Lidge got him to take one ugly hack at a 1-and-0 slider. But Edmonds then laid off three straight fastballs, each one harder than the one before it.

And when plate ump Larry Poncino called the last one ball four, that man on deck, the menacing Mr. Pujols, was suddenly marching toward the box representing the winning run.

If there was a word that best described Minute Maid Park at that point, that word would be "nervous." Those roars of ecstasy had softened into mumbles of worry. Those leaps of joy had turned into squirms of fear.

One moment, the Cardinals had been peering into the other dugout, taking mental notes as the Astros players themselves began to celebrate. After all, they'd lost one game all year when they took a lead into the ninth.

In fact, they'd lost one game like that since June 15, 2004. And they'd gone 136-1 in that situation since -- much of it thanks to the brilliance of Brad Lidge. So who could blame them for celebrating? Well, the Cardinals could, for one.

"We were looking over to their bench, and guys were high-fiving," Walker said. "A couple of guys were even dancing. But until that fat lady sings, you can't do that."

You especially can't do that when there's a chance Albert Pujols could get to hit. And now -- voila -- here he was.

"Any time we go into the ninth with the bottom of the lineup coming up," said Jason Isringhausen, "all we're trying to do is get a hit, get a walk, get a couple of guys on -- because we know: We've got to get Albert up there."

It hadn't been one of Pujols' better nights. He was 0-for-4. He'd left five runners on base. He'd even struck out against Andy Pettitte in the third inning with men on first and third and nobody out. It was only the fifth time all season Pujols had struck out with a runner on third and less than two outs.

"Unbelievable," said Cardinals starter Chris Carpenter. "I'm sitting there thinking that we've got the best closer in the game on the mound -- but we also have the best hitter in the game at the plate. ... It was an unbelievable feeling."

Pujols tapped the plate with his bat, dug in and took a messy, off-balance swing at a first-pitch slider for strike one. The noise began to build again. Towels waved everywhere you looked. Thousands of Thunder Stix crashed together. Pujols stepped back in to hit.

He waved his bat loosely once, then twice. Then he cocked and loaded, rocking gently in the box, as Lidge wound and fired. Pujols even told himself, he would say later: "Don't try to be a hero. Don't try to hit a three-run home run." How ironic was that?

It cleared the boxed-in Cardinals bullpen, which sits underneath the stands. So the relievers sitting there watching had no idea where it was heading: Austin? San Antonio? Mars?

Finally, with nothing left to clear except planet Earth, it splattered off the glass next to the light towers, about a thousand feet away.

And as it clanked off that glass, the most staggering sound of all was the sound of silence where, just seconds before, there had been such a head-pounding din.

"I've never heard 43,000 people shut up, just like that, in my life," Walker said. "One second, you could barely hear in here. And the next second, all that noise was gone. And the only noise you could hear was on our bench."

"When that ball flew over our heads," said King, "I turned to Marty Mason, our bullpen coach, and said, 'That's why they pay that guy 100 million bucks.' "

And that is, in fact, why. But even 100 million bucks doesn't guarantee that any man can deliver a moment like that one. So as Pujols slowly ambled up the first-base line and watched his ultimate homer fly, even he had to make himself understand the magnitude of what he'd done.

But he did it, all right. And now he can never undo it. Cue up the videotape. Write another line in the October history books. It's in there. Forever.

We know that now. What we don't know, though, is what it means. Not yet.

To truly define this moment, we need to wait and see how Game 6 and Game 7 (if the Cardinals can get to that Game 7) turn out. Roy Oswalt and Roger Clemens await. So they could spoil the fun. And spoil the memory. But who knows? Maybe this just means more memories, more moments.

"Who knows what's going to unfold when we get home?" said Sanders. "Nobody knows. All we know is this: Now we have a chance."