More than most, perhaps more than anyone, Dennis Eckersley can feel Brad Lidge's pain. 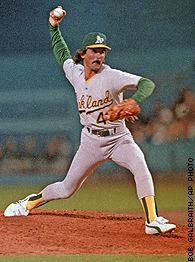 The Hall of Fame reliever wasn't watching Game 5 of the NLCS when Lidge surrendered the two-out, three-run homer to Albert Pujols on Monday night. But after returning home late Monday, he soon saw the highlights.

No one had to point out the obvious connection for Eckersley.

In Game 1 of the 1988 World Series, Eckersley gave up a game-winning, pinch-hit homer to Kirk Gibson. The Los Angeles Dodgers then steamrolled the heavily favored Oakland A's to win the Series in five games.

Like Lidge, Eckersley had made the critical mistake of issuing a walk just before the game-winning homer.

"[Lidge] was careful with [Jim] Edmonds," Eckersley said. "My problem was, I got careful with Mike Davis. Of course, I didn't know that Gibson was going to hit next."

Everyone assumed that Gibson, who could barely trot around the bases, wouldn't hit at all. By contrast, Lidge knew that Pujols, stationed in the on-deck circle, was due next at the plate.

Eckersley noted that Lidge got beat with a slider, eschewing a 97-mph fastball. Ordinarily, getting beat with your second-best pitch is a cardinal sin.

"But his second-best pitch is so close to his best pitch, you can't second-guess," said Eckersley, who also gave up a ninth-inning, game-tying, two-run homer to Roberto Alomar in Game 4 of the 1992 ALCS. "I'd be blowing people away if I had that fastball, but maybe he didn't like his gas. He was missing with it. And he's got the nastiest slider in the game."

Pitch selection aside, Lidge will have to deal with the mental aspect of halting Houston's celebration for its first World Series visit. In the nanosecond it took Pujols' blast to rocket toward left field, the ballpark went from earsplitting euphoria to stunned silence.

And what if they don't? What if the Game 5 comeback fuels two more Cardinal wins in St. Louis and the Astros never get to the Series?

"That will be devastating," Eckersley acknowledged. "God ... one strike away. Jeesh."

The toughest test, of course, could come in Game 6 if Lidge is presented with a save opportunity.

Somewhere, Lidge will have to find the mental toughness to put the disappointment behind him. But it won't be easy.

"I don't know the kid," cautioned Eckersley. "But I don't think he's done it long enough to know what he's dealing with. I think a lot of it, with me, was that I was old enough to appreciate where I was and where I came from. I came back from the dead -- my whole story, you know -- and that helped. In the offseason. It really did."

As crushing a blow as it was for Eckersley and the A's, Gibson's homer came in Game 1. Lidge, too, has the advantage of time. The Astros still lead and still have two chances to win one game.

"He's lucky it wasn't Game 7," Eckersley said. "They're still up three to two, and having more time helps."

So, too, will Tuesday's off day.

"I think that's helpful," he said. "He needs time before he goes out there again. You can say that you want another opportunity right away, but you really don't want it."

But while Eckersley and the A's were able to go home for Game 3 in '88, Lidge and the Astros face the prospect of playing Game 6 -- and potentially, Game 7 -- on the road.

"I had time to go to Oakland, and [the fans] gave me a standing ovation when they announced me," Eckersley recalled. "That made me feel better. I just wanted to redeem myself. He has a chance to redeem himself, too. God knows, they need him."

Eckersley speculated that veteran teammates such as Roger Clemens and Andy Pettitte can steer Lidge through the disappointment, having been exposed to painful postseason defeats themselves.

"I think that can help," he said. "They're going to pump him up and help him a lot."

Ultimately, however, Lidge must do it himself. Perhaps as soon as Wednesday night.

"I think he will be fine," said Eckersley, a man who's been there.

But he thought for a bit and added this: "But I still wouldn't want to be him."