ST. LOUIS -- Jumping up and down in a close knot of
teammates during San Diego's celebration of the NL West
championship, Jake Peavy felt a sharp twinge in his rib cage. 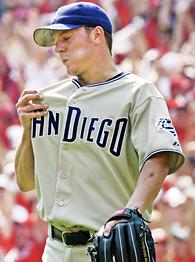 The Padres' ace tried to pitch in Game 1 of the NL division
series anyway, an 8-5 loss to the St. Louis Cardinals, and now he
will miss the rest of the postseason with a broken rib.
An MRI exam at Barnes-Jewish Hospital revealed a fractured
eighth rib, and doctors were still trying to determine if the ninth
rib was fractured, too.
"The next day I just thought I had some bruised ribs, caught an
elbow or something," Peavy said. "I never would have imagined it
would have been this."
Peavy figured to be the Padres' best hope of upsetting the
Cardinals in the first round of the best-of-five playoffs. He led
the NL in strikeouts, ranked among the league leaders in ERA and
easily was the ace of a team that finished only 82-80.
None of that helped in his first career postseason game. Peavy
gave up eight runs, all earned, in 4 1/3 innings as the Cardinals
built an 8-0 lead.
Peavy felt pain in the third inning when his spike got caught on
the rubber on a bases-loaded wild pitch that didn't even make it to
the dirt in front of home plate. The pain worsened the rest of the
way.
The injury explains Peavy's struggles.
"It's been a little bothersome, but nothing we thought would
get in the way of me today," Peavy said. "Trying to turn it up,
there were some issues."
Jim Edmonds hit a solo home run with one out in the first, and
the Cardinals bunched three hits, two intentional walks and a wild
pitch to score three more runs in the third.
The end for Peavy came in the fifth, when singles by Edmonds and
Albert Pujols and a walk to Larry Walker loaded the bases for
Reggie Sanders. Swinging on a 3-0 pitch, Sanders hit a long grand
slam to make it 8-0.
"You've got to get a strike -- it's bases loaded," catcher
Ramon Hernandez said. "He put wood on it and hit it out."
Added Bochy: "It's not really a time to start picking at the
corners. We're down four at that point. You've pretty much got to
challenge them, and we lost the challenge."
Padres players weren't aware Peavy was hurt until learning from
a reporter after the game.
"That's the first I've heard of it," first baseman Mark
Sweeney said. "Hopefully he'll be OK."
With Peavy out, the rotation for the rest of the series is in
limbo. Adam Eaton would likely pitch Game 4, if necessary, and
Brian Lawrence would be the likely choice for Game 5, Padres
spokesman Luis Garcia said.
Peavy never resembled the pitcher who struck out 216, went 13-7
and had a 2.88 ERA this year.
In 30 regular-season starts, Peavy allowed more than four runs
just twice. He allowed five runs in five innings but got the win
over Seattle on June 25, and gave up seven runs in five innings in
a loss to the New York Mets on July 21.
Tuesday's outing was also Peavy's second-shortest -- he pitched
four innings May 31 in the Padres' 8-4 win over Milwaukee.
Peavy finished the season with two strong outings. That was
better than Cardinals starter Chris Carpenter, a 21-game winner who
struggled down the stretch.
Bochy had played down Peavy's lack of postseason experience,
noting his first career start was against the Yankees before a huge
crowd and that Peavy pitched in the All-Star Game this year.
Walker was impressed, despite Peavy's struggles.
"He's got years and years ahead of him," Walker said. "He's
going to be a star in this league. He's got Cy Young written all
over him."