DETROIT -- Jack Nicholson might not be the only big-name, highly-compensated star appearing in "The Departed" this weekend. 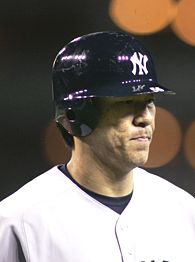 Just a few days ago, geniuses from every market and medium expected the New York Yankees to be doing lots of things other than playing baseball this weekend. The conventional wisdom was that they'd bounce Detroit in the American League Division Series, board a charter flight home, and spend Sunday watching football and playing with the kids while manager Joe Torre arranged his Championship Series rotation.

Yet here the Yankees stand, with their monumental hype and gargantuan payroll, pinning their hopes on Jaret Wright and some dormant bats to extend their season to Sunday. Go figure.

Postseason baseball returned to Detroit for the first time since 1987 on Friday night. As if the Four Tops singing the national anthem and Al Kaline throwing out the first pitch weren't enough to generate a positive feel for the home team, 41-year-old Kenny Rogers proved that the Yankees' batting order for the ages isn't all it's cracked up to be.

Detroit's 6-0 victory at Comerica Park did more than evoke memories of the Mayo Smith days and bring joy to a city that's taken its lumps in recent years. It put the Yankees, down 2-1 in this best of five, on the fringe of a stunning exit.

Not stunning to the level of their 3-0 collapse against Boston in 2004. But it's not all that far removed in terms of embarrassing comedowns, and the experience would be painful enough to re-open some ugly wounds and ensure a long winter of upheaval in the Bronx.

If Torre thought it would help, he might send Wright to the mound wearing a bloody sock. But the Yankees will need more than good karma.

After beating the Tigers 8-4 in the series opener, the Yankees have scored a total of three runs and batted .203 (13-for-64) in back-to-back losses. Since Johnny Damon's three-run homer off Justin Verlander in the fourth inning Thursday, they've gone 14 consecutive innings without a run. 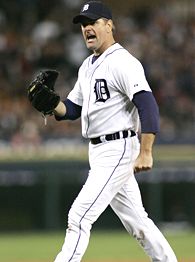 The New York players are too seasoned and businesslike to send out negative signals. But there was some blunt talk in the clubhouse about the need to show energy and get the old swagger back.

"We negatively need to have more life," Damon said. "Not so much rah rah, but that inner confidence that says, 'Every time I go up to the plate, I'm going to get the job done.' And when you don't, the next guy needs to have that confidence.

"When you look at that scoreboard and you see no runs, you're just shaking your head. We should be able to at least push across one. What can you say? It stinks."

If any opposing pitcher figured to give life to a sagging New York offense, it was Rogers. Although he finished 17-8 this season, he was terrible in his final regular-season start against Toronto, and he took the loss in relief against Kansas City last Sunday in a defeat that relegated Detroit to the wild card.

Rogers entered the Division Series with a career 0-3 record and an 8.85 ERA in postseason play, and with the exception of Gary Sheffield, hitters up and down the New York lineup have a history of teeing off on him. The list of offenders includes Jorge Posada (.500 career average), Jason Giambi (.435), Bernie Williams (.353) and Damon (.306).

Then there's Alex Rodriguez, who entered this game with 10 hits and five homers in 19 career at-bats against Rogers. A-Rod's combined on-base/slugging percentage against the Gambler was an unfathomable 2.046.

But Rogers, whose October flops included memorably bad outings for the Yankees and Mets, pitched like a man looking to redeem his legacy. He pounded the strike zone, made deft use of his changeup and curveball, and threw his fastball with more zip than anyone expected.

"He was awesome," Rodriguez said. "That's not the Kenny I remember, I never remember him throwing 93 miles an hour. I remember Kenny being more of a Jamie Moyer type who maxed out at 84. I give him a lot of credit. He was phenomenal tonight. We probably had three or four good swings all night."

"The bottom line is, it doesn't matter how good we pitch if we don't score. We have to come out and be aggressive and play well. I'm sure they don't want to go to New York."
-- Yankees shortstop Derek Jeter

The Yankees' knack for running deep counts, considered such a weapon, has been negated by the aggressiveness of the Detroit staff. Rogers squeezed 7 2/3 innings out of 112 pitches, and left to a deafening ovation from the 43,440 at Comerica.

While Rogers might not qualify as a sentimental favorite after his now infamous run-in with that TV cameraman last year, the fans in Detroit sure love him. As he walked off the field, Rogers tipped his cap, placed his hand over his heart, and turned to the outfield and waved to the crowd just to make sure he didn't miss anybody.

"I wanted this win for us as a team, but I wanted it for myself, my family, everything," Rogers said. "I wanted to do well and leave nothing out there. And this is probably one of the wins that I'm never going to forget, for sure."

Unless Jeremy Bonderman can seal the deal for the Tigers on Saturday against Wright, Rogers' effort could be rendered meaningless. But at the moment, it's the Yankees who are scrambling.

"The bottom line is, it doesn't matter how good we pitch if we don't score," said Derek Jeter. "We have to come out and be aggressive and play well. I'm sure they don't want to go to New York."

Regardless of what happens in Game 4, the Yankees will be back home in New York on Sunday. They'll find out soon enough if they have a baseball game to play.