DETROIT -- Al Kaline and Willie Horton, Detroit Tiger favorites turned front-office assistants, love to tell the team's young players about the city's potential. Detroit doesn't have to be a baseball wasteland -- or even Hockeytown. Win enough games, they say, and the city will embrace you and rediscover its passion for the game.

That thought crossed Brandon Inge's mind Saturday afternoon as he was standing at third base and the Tigers were in the process of sending the New York Yankees home for the winter.

"I can't tell you how many times the last two games that I've been on the field and every hair on my body has stood up because they're yelling and cheering so loud," Inge said. "That's a pretty good feeling, when you get that adrenaline rush and your hair stands up."

"Maybe in some ways the good Lord was looking after us. It was probably a little bit of a bonus for us to only have to beat the Yankees three times instead of four."
-- Tigers manager Jim Leyland

Baseball fans in Detroit hadn't experienced October ball since 1987 -- the height of the Sparky Anderson administration -- and they did it up right this weekend, dancing to the Bay City Rollers, cheering John Belushi's "Animal House" pep talk on the scoreboard and waving orange towels until their rotator cuffs ached.

After the Tigers beat New York 8-3 on Saturday to advance to the American League Championship Series against Oakland, the Detroit players headed for the stands to mingle and spray champagne. If you bought a ticket to Game 4 at Comerica Park, you left with warm memories and, in a few cases, a face full of G.H. Mumm premium brut.

"Moments in your life are greater when they're shared," said Detroit closer Todd Jones, sounding like a Hallmark card. "Today, we shared a great Tiger moment with 40,000 people in the stands, and I don't think they'll ever forget it."

First baseman Sean Casey's eye black was smeared across both cheeks, and he looked like an extra from "Braveheart" as he charged into the clubhouse with a bottle of champagne in each hand.

"This is a baseball city, man," Casey said. "They're fired up for baseball. These people are going crazy, and we need them to keep going crazy." 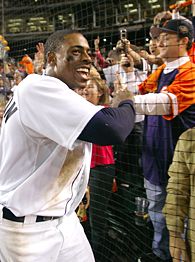 The Tigers' 3-1 series victory over New York will be remembered for some special performances by a Detroit pitching staff that led the majors in ERA this season. The most notable efforts were turned in by starters Kenny Rogers and Jeremy Bonderman, who combined to hold the Yankees to two runs in 16 innings in Games 3 and 4.

And the Yankees will be remembered for failing miserably despite an assemblage of talent that had national media commentators gushing before the postseason.

Manager Joe Torre's lineup for the series opener with Detroit featured players with a combined 42 All-Star Game appearances. The Yankees had two former Most Valuable Players in Alex Rodriguez and Jason Giambi, two 400-homer guys in Rodriguez and Gary Sheffield, this year's likely MVP in Derek Jeter, and a third-place hitter, Bobby Abreu, with a .412 career on base percentage.

The guy at the top is pretty good, too. This year Johnny Damon joined Lou Gehrig and Stan Musial as one of three players in history to record 100 runs and 30 doubles in nine straight seasons.

Yet with all those weapons at their disposal -- not to mention Jorge Posada, Hideki Matsui and Robinson Cano -- the Yankees were downright inept after their 8-4 win in the series opener. They hit .095 (2 for 21) with runners in scoring position in their three losses, and batted .246 only by stringing together several meaningless hits late in the series clincher.

During one fallow stretch, they went 20 innings without scoring a run. Larry Bowa could have brought a magazine to the third base coach's box, for all the action he saw.

"Plain and simple, they dominated us," Rodriguez said. "It's not like we lost by one or two runs. They actually kicked our ass."

Few people would have expected that last weekend, when the Tigers lost three straight to Kansas City to blow the American League Central title. The consensus was that Minnesota caught the break by winning the division and playing Oakland in the first round, and the Tigers drew the short straw by playing the Yankees.

The lesson: It's dangerous to make assumptions in October, even where lost causes and sure things are concerned.

"Maybe in some ways the good Lord was looking after us," said Detroit manager Jim Leyland. "It was probably a little bit of a bonus for us to only have to beat the Yankees three times instead of four." 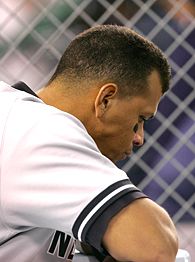 As much as the Yankees like to rely on their aura in big games, there were just too many weird signals emanating from the New York side before Game 4. Most notably, Torre benched Giambi and ran out a lineup card with Rodriguez in the No. 8 spot.

At least Giambi has an excuse: He's playing with a torn ligament in his left wrist. Rodriguez's issues go much deeper and can't be addressed with offseason surgery.

The Tigers led 3-0 Saturday when A-Rod stepped to the plate for the first time and grounded weakly to third base. That kicked off another 0-fer, which left him with an .071 average (1-for-14) in this series and extended his three-year run of futility to 4-for-41 with no RBI over 12 postseason games.

A-Rod in October has become baseball's answer to Phil Mickelson clanking his 18th hole drive off the hospitality tent at Winged Foot in the U.S. Open, then coming up with all sorts of innovative ways to melt down in front of a national TV audience.

As usual, Rodriguez was a mass of contradictions. He claims that his 2006 regular-season ordeal was so difficult, he was actually relaxed heading into the playoffs. Then moments later, he observed that he has learned a lot from watching teammates like Jeter and Posada, who produce in October because they find a way to relax when the games matter most.

The inference, of course, is that Rodriguez is anything but relaxed.

To his credit, at least A-Rod didn't whine about hitting eighth.

"I've got no one to blame but myself," he said. "Joe Torre has been incredible with me. You've got to look in the mirror."

The game ended with a harmless groundout by Cano and Rodriguez standing in the on-deck circle. A-Rod banged his bat against the ground, dislodging the weighted doughnut. And then, as security people in orange jackets passed by him, he lingered and watched the Tigers celebrate, as if a few seconds of additional suffering might motivate him to work harder

A moment later, Rodriguez walked down the dugout stairs into an uncertain future. Maybe the Yankees keep him around and hope a clean slate will make the difference in 2007. Maybe general manager Brian Cashman decides it's best to move Rodriguez, and the Yankees appeal to him to waive his no-trade clause.

Perhaps, come spring training, he's hitting in front of Vladimir Guerrero in Anaheim or replacing Aramis Ramirez at third base in Chicago.

One thing is for sure: If Rodriguez is going to leave New York, it's because the fans and the media run him out of town, not because he's lobbying publicly for a change of venue.

"I'm committed to being part of the solution here," Rodriguez said. "I believe that I am, and I'm committed to come back next year and do it again. I look at a guy like John Elway, and I find some inspiration there."

Starting now, Rodriguez will have plenty of time to watch both football and baseball on television. During the Division Series, one prominent TV spot featured a tuxedoed Tommy Lasorda talking a distraught Boston Red Sox fan out of the bathroom by pointing out that she still has the option to "root against the Yankees."

We can only assume that the spot is history. Like the Yankees, it's obsolete.