DETROIT -- Suppose we ran an ESPN SportsNation poll on this question:

It's Game 1 of the World Series. You're trailing the St. Louis Cardinals by one run. There's a runner on second, meaning first base is open. And Albert Pujols is heading for home plate. Should you:

A) Walk him?
B) Challenge him?

Or D) suggest this would be a great time for him to get his hamstring MRI'd?

Yeah, suppose we polled you experts out there on a question like that. Here's a wild guess:

About 97 percent of you would pick option A. Another 2.996 percent would pick option C. And four guys in Missouri would be clicking option B and chuckling, "Go ahead. Toss your best heater, right down Trumbull Avenue."

Well, it's a little late to fire that question at The Nation. But Tigers manager Jim Leyland had his chance to vote in a special one-man survey on this very topic in the third inning Saturday night. And if he had it to do over again, uh, let's just say he'd probably be on hold with that MRI clinic as we speak.

"I'll take the bullet there," said Leyland, after his team's 7-2 Game 1 loss had made certain that lots of those people who were predicting a Tigers sweep in this Series were going to be extremely grateful they didn't take that prediction to Vegas.

"I could go into a lot of detail about that," Leyland said of that fateful decision to pitch to Pujols. "But I'll leave it at this: The manager's decision is either to pitch to him or walk him. I pitched to him, and obviously he burned us. ... I'll take the heat for that."

The Cardinals led 4-1 when Pujols crossed home plate. And this game never got any closer for the final 6½ innings. So if you're one of those people who have been clinging to the notion that the National League was still considered a real major league, there's big news:

It's now safe to walk the streets again. The NL's long October nightmare is over.

But if that shocked you in any way, then obviously, you haven't been paying enough attention to the insane and illogical plot lines that keep erupting nightly in this postseason.

"It's October, man," said the Cardinals' Jason Isringhausen. "You throw the stats out the door when these games start happening."

Well, if you ever wanted to pick a night to heave the stats out the door, this was sure a fine choice -- because whatever numbers, trends or factoids you might have thought would apply to the way this series would play out, they were all rendered useless in the next two hours and 54 minutes.

• The Tigers had won seven postseason games in a row before this game, had won each of the last six by at least three runs, had outscored the Yankees and A's by a ridiculous 40-15, and had trailed after only nine of 63 innings. 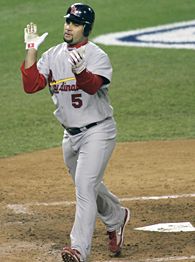 • The Tigers' starting pitcher, Verlander, won more games this season (17) than any pitcher in the National League. On the other hand, the Cardinals' Game 1 starter, Reyes, had won fewer games this year (five) than any Game 1 World Series starter ever.

• Reyes also had the second-highest ERA (5.06) of any Game 1 starter in history -- trailing only the fabled General Crowder, who brought a 5.77 ERA to the mound with him for Game 1, 1934. (Sorry -- videotape of the General not available, not even on YouTube.)

• The Cardinals' first run in this game scored on a home run by Scott Rolen. Which was a slight departure from the last time Rolen played in a World Series -- when he went 0 for the Whole Freaking World Series (0-for-15). According to the Elias Sports Bureau, no player since Gil Hodges, in 1953, had gone 0 for any World Series with that many at-bats and then ended that schneid with a homer the next time he played in one.

• And finally, there was Pujols. Remember all his home runs from that 2004 World Series? If you do, you're lying -- because he finished that Series with zero homers and zero RBI. So it figured it would take him three innings to get that ugliness behind him.

"I don't think you can change anything that happened two years ago," Pujols said after one of his pals in the media helpfully brought up those attractive numbers. "That was then. This is now."

But now also happened to follow an NLCS in which the Mets made it clear they would rather all take jobs selling counterfeit watches on Lexington Avenue than let Pujols get a big rip in a spot like this.

Pujols came to the plate five times with runners in scoring position in the LCS. He walked in four of them. He was allowed to swing only once, with runners on first and second and two outs, in Game 7.

Asked if he was frustrated by his treatment in that series, Pujols replied: "I'm not frustrated -- because we won four games, and we're here in the World Series."

Hmmm. Good point. Then again, he sure wasn't complaining when the Tigers actually let him hit for a change Saturday. But he claimed he wasn't surprised, either.

"Surprised? No. Why?" he smiled. "I'm just human, and I make a lot of outs. I get some hits in key situations. But sometimes I don't come through in that spot in the game. That's the last thing I want to try to do, is think about: Are they going to pitch to me, or are they not?"

Well, it may be the last thing he's thinking about. But his teammates sure think about it. We know that. Just listen:

"In the bullpen, we were screaming, 'First base is open,' " said Isringhausen, who apparently wasn't screaming it loud enough for Leyland to hear.

But Leyland, of course, knew the deal, whether the Cardinals wanted to mention it to him or not. That's because Jim Leyland knows every deal about every situation.

The manager may not have felt like recounting all the thoughts that zig-zagged through his brain at the time. But when he popped onto the Fox telecast in mid-game, he made it clear he'd just wanted Verlander to try to tempt Pujols with pitches off the plate -- and regretted afterward that he'd put a rookie in that position.

Verlander, however, was taking full responsibility.

"As a pitcher, you've got to know the situations where you can and can't pitch around guys," he said. "Even if it's not Albert Pujols up there in a situation where it's two outs and a guy on second base, you really don't want to give a guy anything to hit no matter who it is -- whether it's the first hitter or the ninth hitter. So I made a little bit of a mistake. It's a pitch the ninth hitter may not have hit ... but it's Albert Pujols."

Right. Sure was. And when Pujols gets to play, his team is always eternally thankful for that.