OK, now that we've got that little item out of the way, let's move on to the biggest Kenny Rogers story of the night:

When a 41-year-old man does something in a World Series game that hadn't been done in 101 years, you want to turn that into an uplifting tale that could inspire old guys everywhere to go sprinting out into the nearest parking lot to start working on their cut fastballs.

But this can't be that kind of story.

When a pitcher who, a mere three weeks ago, was carrying around the highest career postseason ERA in the history of baseball then goes and spins off his 23rd consecutive scoreless October inning, you want to tell the world how he finally rewrote the script of his lifetime.

But we're having trouble with that angle, too.

That's because something so bizarre went on at Comerica Park on Sunday night that we need a Congressional committee, the cast of "Law and Order" and at least one descendant of Sherlock Holmes to sort it all out.

Somewhere in the midst of this Dirtgate saga, the Tigers beat the Cardinals 3-1 Sunday night to even the World Series at a game apiece. So at least that's one story everybody involved got straight.

Too bad it was the only one.

As for Kenny Rogers and that gunk on his pitching hand? Step right up and throw your own conspiracy theory out there. It has to beat the 1,001 explanations that came spilling out of the mouths of all involved.

So what do we know? That Rogers was spotted by the Fox cameras in the first inning with, well, something mucked all over his pitching hand. We also know that, by the second inning, he'd washed whatever it was off his hand.

Since he then twirled seven more shutout innings after he cleaned up his act, maybe we should be investigating what was in that water -- as opposed to what that water washed away. But we're resisting that temptation, at least for now.

We learned in journalism class that you should always start these tales with the person involved. So fine. We'll let Rogers give his fascinating version of these events.

What was on his hand? "A big clump of dirt," Rogers said.

And where did that clump come from? It was "dirt and rosin" he used to "rub up the baseball," and it was "left on my hand when I rubbed them up."

Yet even after warming up and then throwing 18 pitches to five different hitters in the first inning, he still "didn't know it was there." But then "they told me, and I took it off, and it wasn't a big deal."

And that shot that the TV cameras showed of Rogers in deep second-inning conversation with plate ump Alfonso Marquez? "He just came and told me how much time I had between the innings."

Oh. So Marquez never mentioned that humongous clump of dirt? "No."

All righty then. So that's the end of it. Right? A clump of dirt happened to appear on his pitching hand, and he wiped it off, and then went back to being Sandy Koufax.

Because his own manager, Mr. Jim Leyland, said the umpires "made Kenny wash his hands." And Steve Palermo, an MLB umpiring supervisor, reported that Marquez "asked Kenny to remove that dirt, so there wouldn't be any question as far as that controversy."

Great. Took care of that controversy stuff in no time flat, didn't they? Cleared it right up.

So this should be the point where we should be moving on to talk about Rogers' sensational evening on the old pitcher's mound, right? Nope. Sorry. Not quite yet.

Because if Rogers was so darned innocent, how come he was trying so hard to deny everything except his pitch count?

But what was he denying, exactly? Nobody ever did actually accuse him of anything, except yelling at his teammates louder than their mothers ever did.

If the Cardinals had just accused the guy of playing dirty instead of merely being dirty, we would all at least know what the heck we were dealing with here. But they never did. And given Cardinals manager Tony La Russa's normally feisty in-game persona, that doesn't make much sense, either.

When Cardinals left fielder Preston Wilson was asked a what-if-Rogers-was-cheating kind of question, he replied: "Anybody out there doing something [illegal] should be searched."

But of course, Rogers wasn't searched -- because the Cardinals never asked the umpires to search him. So Wilson, like the rest of the occupants of his clubhouse, was doing his best to backpedal away from anything that remotely resembled a pointed finger.

"It really wasn't a big topic of conversation," he said. "If we were thinking about anything other than trying to have good at-bats, it would be taking us away from what we're supposed to be doing."

Yeah, imagine if they had been thinking about what that slop was on Rogers' hand? What would they have done -- swung and missed at all 99 pitches he threw? Good thing they kept their focus -- and at least got two hits.

By the way, we'll get around to telling you how cool it was that a guy this old could give up just those two piddly hits any minute now, too. But sorry. There's still a tad more subterfuge to uncover here.

Because, according to Tigers players, the mere suggestion -- but not the actual accusation -- that Rogers might have been up to something apparently got Leyland more stoked up during the game than he let on afterward.

Closer Todd Jones reported that when he arrived in the dugout in the second inning, Leyland was complaining that "the Cardinals hitters were saying he was doing something to the ball, but nobody wanted to check him. And Jim was like, 'Wait, you can't have your cake and eat it, too. If you guys think that, you've got to check him.' I mean, they can't plant the seed and try to mess with Kenny.  You've either got to not say anything or you've got to go out and check him." 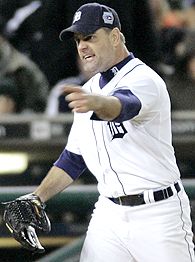 Yeah. Wouldn't you think? But instead -- either because they weren't sure, or because Rogers wiped away the evidence, or because La Russa didn't want to mess with his buddy Leyland -- they left us all dangling, not knowing what to think.

And that's not good, seeing as how the guy is having one of the greatest postseasons in the history of the universe and we'd sure like to know what to think about it.

So with all this mystery swirling and hurting so many of our heads, Jones, media-friendly guy that he is, attempted to clear all this up.

Chocolate cake, huh? Oh, of course. He probably just never wiped the cake off his hands because he was steamed that it wasn't served a la mode. But wait, we protested. Was chocolate cake even being served Sunday in the Tigers' food spread?

"Well, no," Jones confessed. "But there was steak and gravy. So the gravy could have been on there."

Yeah, sure. And probably a few mashed potato shreds, too. No way Rogers would have noticed that, either, of course.

But as absurd as this fiasco may have been, a World Series game did take place all around it Sunday night. And that's probably something we ought to note, too.

Craig Monroe homered in the first inning of that game, to put the Tigers ahead to stay. And that's worth mentioning, because Monroe's homers in each of the first two games made him the first guy to go deep in two straight World Series games since Barry Bonds in 2002.

We should also say a word about Detroit's Carlos Guillen, who singled, doubled and tripled in this game. He was the first player to do that in a World Series game since Paul O'Neill six years ago.

And Jones made quite an impact on the proceedings himself. Can't ignore that. He relieved Rogers in the ninth, got the first two outs and then let four straight hitters reach base -- one of them because he managed to avoid catching a Juan Encarnacion two-hopper back to the mound.

"He's going to take a little PFP [pitchers' fielding practice] before he gets on the bus tonight," Leyland quipped later. "I'll tell you that."

But before his PFP session, Jones stopped hyperventilating long enough to retire Yadier Molina with the bases loaded. And when he did, the win belonged to the man who was the story of the day in more ways than one: Kenny Rogers.

Rogers became the oldest starting pitcher ever to win a World Series game. And he has now held opposing hitters to an .029 batting average (1-for-34) with runners on base in this postseason.

Before he threw his first pitch this October, he had allowed 20 earned runs in 20 1/3 career postseason innings. Three starts later, in his new Motor City incarnation, he has allowed zero runs in 23 innings.

There has been no real compelling explanation for why he's been able to do that, either. But he's definitely doing a lot more primal screaming now than he ever did -- after every single out.

"He scares me sometimes," first baseman Sean Casey said. "I get ground balls over there, and he's yapping. When we're turning two, he's yelling, 'TURNIT, TURNIT, TURNIT, TURNIT.' I'm like, 'Man, you're going to have a heart attack out there. Take it easy.'"

But Rogers keeps saying this scream therapy is fueling this astounding run through October. So he's not stopping now, not after three consecutive scoreless October starts of 7 2/3 (against the Yankees), 7 1/3 (A's) and 8 (Cardinals) innings.

Only one other pitcher in history ever made three starts that long in one postseason without allowing a run. And that was the legendary Christy Mathewson, who fired three straight complete-game shutouts -- as recently as 1905. Mathewson's streak of 27 straight shutout innings in one postseason is now just four innings away.

"Christy Mathewson?" Jones gulped. "He was probably a better fielder than me -- even now. And he's been dead for how many years?"

Uh, that would be precisely 81 years, as a matter of fact. May his glove -- and record -- rest in peace.

It's funny, though. We don't find ourselves sitting here wondering what Mathewson had on his hand back then -- possibly due to lack of videotape. But unfortunately, now we'll always be left to wonder what Kenny Rogers had on his hand. And here, in what's supposed to be the best of times in his sport, that's what stinks the most about this unsavory World Series evening.

See, it wasn't just his pitching hand that Rogers soiled on Sunday night. It was, regrettably, his whole sport. And that's a stain that will take a lot longer to wash off.