ST. LOUIS -- Here's a little advice we'd like to pass along to all future World Series participants, in the wake of Kenny Rogers' dirt-clumping mishap Sunday:

If you're ever thinking about getting in the middle of a massive October controversy -- and hey, who isn't? -- try not to do it the night before a travel day. 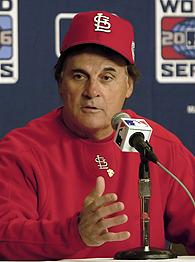 The Tigers and Cardinals can now vouch for the worthiness of that absolutely free advice -- because they arrived at the ballpark in St. Louis on Monday and found out that we insatiable media madmen were still obsessed with the events of the night before.

And they hate it when that happens.

Cardinals manager Tony La Russa was still adjusting his seat at the podium for his off-day press conference Monday when The Question came roaring right at him:

A day later, was he ready to comment on Kenny Rogers yet?

"First question?" La Russa said with a grin, pausing before adding, "I lost the bet."

But if La Russa bet that The Question was coming any later than two questions in, he should be banned from Vegas for life. Because a day later, Dirtgate was destined to spring right back to life, whether the participants wanted it to or not, due to the dreaded, regularly scheduled lack-of-an-actual-game media crisis.

As it turned out, however, this story took on a whole new life Monday. Thanks mostly to La Russa.

Sunday night, in the heat of the moment, he'd dodged all the questions about what he thought was on Rogers' hand, what he said to the umpires and why he didn't demand that Rogers be checked for, well, who knows what: Clumps of dirt? Pine tar? Weapons of mass destruction?

But by Monday afternoon, La Russa said he'd "had a chance to think about it." And he was ready to explain (cue the trumpets) his side of this saga.

He is one of those guys, he philosophized, who happens to "believe in the purity of the competition." So because of that belief -- which we wish everybody in the entire sporting universe shared, by the way -- he can't help but "detest any kind of BS that gets in the way of the competition."

So obviously, he sure didn't want any BS to get in the way of a World Series game. Who would?

But then there he was in the first inning Sunday, and several of his players came sprinting down the tunnel from their spot in front of the clubhouse flat screen to inform him that the Fox TV cameras were zeroing in on a big brown splotch on Rogers' pitching hand.