HOT SPRINGS VILLAGE, Ark. -- Dave Karaff doesn't have to work right now. Five days a week he stocks grocery shelves at the local Wal-Mart, but tonight, he settles into the comfy, oversized chair to watch his beloved St. Louis Cardinals in the World Series.

The man's got a right to love them. He spent seven years as a Cardinals scout before being let go in 2003. His biggest signee was the guy walking up to the plate right now: reigning National League MVP Albert Pujols. Yes, that's right. The scout who signed Albert Pujols stocks groceries in an Arkansas Wal-Mart.

How's that for an organizational thank you? Some guys get bonuses. Others get watches. Karaff got canned.

Karaff, a friendly 64-year-old grandfather, doesn't mind if you come watch Game 2 with him, but under one condition: He's not gonna talk about Pujols. Though the slugger is wildly talented, he's also as sensitive as a junior high cheerleader and is still peeved because he believes Karaff said he wouldn't make it to the big leagues. In reality, Karaff felt like he was a talent but not a sure-thing first-rounder. Clearly, every other team agreed.

But after Pujols popped off earlier this year, it's best not to start any drama. So Karaff isn't gonna talk about Pujols, not a word about the guy who looks like he might walk off the high-def television at any moment. Not a word. Doesn't want to cause any problems. Well, you know, maybe a few words won't hurt. After all, signing the probable Hall of Famer is the highlight of his career.

"I will say one thing," he says. "If there's anybody that can stand there and tell me truthfully this is what they thought he'd do, I would call them a liar to their face and never flinch."

Karaff sits in his chair and watches Pujols watch the pitcher.

"When he's going bad, he really floats to that front side," Karaff says. "That's what he did in high school."

He ought to know. Karaff has spent his entire life around the game. For almost two decades, he coached Hickman Mills High in Kansas City. He worked as a scout for the Seattle Mariners and, starting in the mid-'90s, for the St. Louis Cardinals. He'd always been a Redbirds fan; he had his car stolen at the 1985 World Series and, instead of calling his wife, he bought new clothes at a discount store and went to the next game.

Scouting for his favorite team was a dream job, one he took seriously. For 130 or so nights a year, he rated players. He went everywhere. Three years before he was fired, for instance, he was assigned Minnesota, North Dakota, South Dakota, Iowa, Nebraska, half of Missouri, Kansas, Oklahoma and Arkansas. The highway was his home. His car logged more than 40,000 miles a year.

"I will say one thing. If there's anybody that can stand there and tell me truthfully this is what they thought he'd do, I would call them a liar to their face and never flinch."
-- Dave Karaff about Albert Pujols

Mostly, he charted people who'd never spend a day in the big leagues. Then there was this young man in Kansas City. Albert Pujols. He had obvious skills. The Cardinals' scouting form gave players a grade between two and eight, Karaff says, with each prospect getting a present and future score in each category. A "five" is considered major-league average.

"I probably made him a six hitter future," Karaff says, "but he probably was a four hitter present."

The rest, of course, is history. Though he slipped to the 13th round of the 1999 draft, Pujols made it to the bigs in 2001, won Rookie of the Year and now has 250 home runs in just six seasons. He is arguably the most feared hitter in baseball. He's a superstar.

And Karaff? He was fired in 2003. The team decided to go in a different direction, and there was a massive shakeup in the scouting department. Lots of people were left to wonder what they might have done better. Karaff figured he should have sold his players harder.

"That was probably a weak point of mine," he says. "I sold them on paper, but I don't think I did a good job talking them up. Until the end. If I'm gonna struggle or if I've got a chance to lose my job, I'm gonna put 'em on the line. That's what they want you to do."

Three years later, the wound is still fresh -- seemingly more so for his wife, Jannette, than for him. He's explaining his release, and the personalities involved, and he's doing it with kid gloves. She's sitting nearby, practically simmering.

"Dave's just being nice," she says.

He had to let it go. He needed to find a job that offered benefits. Hence the grocery stocking. But there are certainly days he wishes he had his old life back.

The things he did as a scout make him proud, even if it didn't end like he wanted it to. That makes Pujols' recent public comments cut deep. 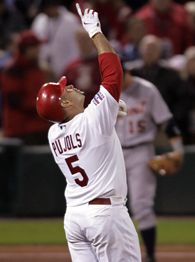 The slugger, for instance, told The Kansas City Star: "He said I wasn't going to make the big leagues. That's why he got fired."

He told USA Today : "How can you draft a guy and say you don't know if he's going to make the big leagues? All of a sudden, the next year (I'm) in the big leagues, and he wants to take all the credit."

That burned up Karaff's family, who felt like a superstar multi-millionaire was picking on a guy who stocks shelves at Wal-Mart. They say Karaff isn't trying to take any credit.

"I was heartbroken for Dave because I didn't think it was fair," Jannette says.

Losing his dream job was bad, but being called out by the player he once championed to his organization is worse.

"I think everything that happened with Albert hurt more," he says.

Still, they are Cardinals fans. Both lean toward the television as their team holds onto a lead. Pujols comes to the plate. Jannette Karaff almost jumps out of her chair. They're just fans now, glued to the television.