NEW YORK -- Baseball players' superstitions have been well-documented, from Wade Boggs's pregame chicken to Nomar Garciaparra's bit in the batter's box. Though when it comes to the supernatural, it's often hard to find true believers in a major-league clubhouse -- especially on Friday the 13th. 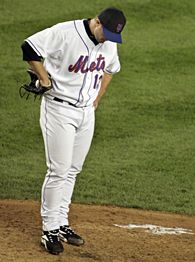 You couldn't help but wonder if something was at work this Friday the 13th night when Billy Wagner -- who happens to wear No. 13 -- entered Game 2 of the National League Championship Series with the scored tied at 6 and an opportunity to let the Mets' potent lineup take over in the bottom of the ninth. All he needed to do was keep the game tied.

Yet Wagner's night was anything but routine. He allowed defensive replacement So Taguchi to hit a line-drive homer to left, breaking the tie and, it seemed, the Mets' spirits in their 9-6 loss to the Cardinals. Now both teams head back to St. Louis with the series tied.

"We felt like we had the game," right-fielder Shawn Green said. "We just didn't nail it down."

Normally on these spooky nights, the horror scenes are reserved for a night at home, watching grainy reruns of slasher films from the 1980s. But on this Friday the 13th, Jason and Freddy were trumped by Billy, at least for Mets fans.

When asked why he chose his uniform number all those years ago back in college, Wagner immediately made the connection.

"Aahhhh, Friday the 13th," Wagner said as he bent his head back slightly. "Well, I know after 10 years and almost 300 saves, I've been asked about weirder stuff."

The 35-year-old closer, signed this winter to a four-year, $43M deal, allowed three runs in two-thirds of an inning before manager Willie Randolph replaced him with Roberto Hernandez, a 41-year-old journeyman. Even though technically he hadn't blown a save, there was no hesitation by the crowd as they booed Wagner, who had proven reliable this October by successfully notching all three postseason save opportunities.

"He's a great pitcher" teammate Julio Franco said, "but it happens. Today just wasn't his day. It's going to happen, hopefully not every day."

Taguchi had been 0-for-5 against Wagner in his career. Wagner was 23-for-23 against St. Louis when closing out a game, though Friday night wasn't a save situation. It simply was a need to hold.

"[Wagner is] a great pitcher, but it happens. Today just wasn't his day. It's going to happen, hopefully not every day."
-- Mets teammate Julio Franco

"That's what a closer does at home; you pitch in tight games," Wagner said. "I expect to be in that situation."

Wagner entered the playoffs with an unsteady track record from past Octobers. He was 1-0 with a 7.71 ERA and a blown save in his only opportunity over five appearances, all with Houston. This season, though, Wagner had a 2.24 ERA and 40 saves in 45 chances.

And with the Mets, his October ghosts seemed to be behind him, having entered the postseason with 18 straight saves. But on Friday, Wagner was asked to just hold the game. Keep it close, and let his teammates do the rest.

Superstitious or not, coincidental or destined, a 37-year-old Japanese utility player with only two home runs in the regular season came up and drilled one over the left-field fence. The Cardinals -- perhaps sensing that they'd stolen one with ace Chris Carpenter getting tagged for five runs -- collectively rushed to the top step of their dugout when Taguchi accomplished the surreal.

"Who would have expected that I hit a home run?" Taguchi said. "Maybe nobody, not even me."

When Wagner addressed the media in the Mets' clubhouse after the game, he spoke about letting go of the loss and getting ready for the next game. By that time, the clock had already moved past midnight. And suddenly, Friday the 13th was deemed irrelevant.