But the man he'll be receiving help from is an unlikely source in Kenny Rogers, who's hoping to extend his postseason magic a bit longer as the team's Game 2 starting pitcher in the World Series. The Tigers will look for their veteran left-hander to help them avoid an 0-2 hole in the series.

At 41, Rogers has been his team's best starter this postseason and is, as Granderson calls him, the team's unofficial scout, one who will break everything down from opposing outfielders' throws, to coaching maneuvers and, of course, the other team's pitchers.

"He kind of does a scouting report for the whole team and keeps it in the back of his head," Granderson said. "And when he has a small moment to kind of step back from his pitching, he'll go ahead and let you know and then go back and focus on his pitching." 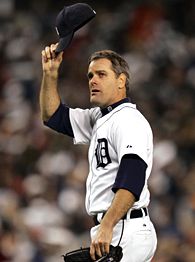 That Rogers talks, educates and aides his teammates -- no matter the day -- is one of the reasons why his poor relationship with the media is not a reflection of who Rogers is as a teammate. The teammate Rogers and the media Rogers are very different people.

"He's one of the best teammates I've ever had," fellow left-hander Nate Robertson said. "More than that, he's like a big brother to me. I'm sure some of the other guys will say the same thing about him."

That Rogers is in this role, and on this stage, where the largest contingent of baseball media members attends, is ironic. But Rogers has handled every media session with class, and even humor at times. It seems to be a sort of metamorphosis that Rogers has undergone.

"You do not want to be a distraction for other players to reach their potential," Rogers said about being a good teammate. "The last thing I ever want to do on my team is do that. If I ever was a distraction, all they've got to do is tell me once, and I'll be gone."

But it was just 16 months ago, after all, when Rogers' behavior became a distraction. Then with the Rangers, Rogers had one of his worst encounters when he got into a confrontation with two local TV cameramen, shoving both of them. It was indefensible, and Rogers ended up serving a 13-game suspension.

That topped off a long history of discontent with reporters, including when he once shoved a newspaper writer out of the Rangers clubhouse in 1994.

Ask almost any teammate of Rogers, and they'll endorse him as one of the best. Gary Matthews Jr. played in Texas when Rogers clashed with the cameramen, and said that Rogers was a great competitor.

"He's great in the clubhouse and tells the truth," Matthews Jr. said. "He doesn't take any crap. Media and organizations don't always appreciate that as much as players do."

This year the Tigers' organization and its players are appreciating a whole lot from Rogers, who won 17 games with a 3.74 ERA. He's been ever better in the postseason, shutting out the Yankees and then the A's -- two of his former teams. Rogers is 2-0 and has not allowed a run in 15 innings this postseason, an incredible stretch for someone who entered the league in 1989.

"He just got on a mission in this playoff, it's been unbelievable up to this point," Tigers manager Jim Leyland said. "I think a lot of people still don't understand that we got Kenny Rogers here because we think he's an outstanding pitcher.  We didn't bring him here to baby-sit." 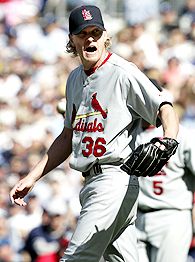 The man opposing Rogers on Sunday, Jeff Weaver, can relate to some of Rogers' media strife. Weaver will be pitching against his old team, one which shipped him to the Yankees, with whom he had a miserable tenure, both on the field and with the media.

Weaver's lowest moment, perhaps, was when he allowed a walkoff homer to Alex Gonzalez in the 2003 World Series as a Yankee. That was until he was released by the Angels this summer so his younger brother could move into the rotation. But Weaver's found a new home with St. Louis, like Rogers has with Detroit this year. And also like Rogers, Weaver has been one of his team's best postseason pitchers, going 2-1 with a 2.16 ERA.

"I don't pay attention to the media, I learned that a long time ago in New York," said Weaver, who shares with Rogers the same agent, Scott Boras, but who said that he and Rogers have never met. "What it's all about is your teammates. The world doesn't revolve around what the media says."

Weaver said he values being a good teammate and tries hard at treating people "the same way I want to be treated."

It seems as though that formula has worked well for Rogers. Even A.J. Pierzynski -- who's had issues with former teammates -- said Rogers was well-liked. Batterymates in Minnesota in 2003, Pierzynski said Rogers was responsible, worked hard and was good to have around.

"I thought he was great," Pierzynski said. "I don't know how to explain it. It's just that he always was there working, talking to younger guys, explaining pitching and what he looks for in hitters."

This summer Rogers attended the All-Star Game in Pittsburgh. The American League's manager, Ozzie Guillen, named Rogers his starter. At the time, Rogers spoke of how important it was for him to pitch well, in hopes of returning to Detroit in the fall with home-field advantage.

It seemed unlikely at the time -- almost unbelievable -- that home field would be relevant to the Tigers. Almost as unbelievable that, to many, Rogers is one of the best teammates in the game. And now he and the fans will see the All-Star effort rewarded at home, Sunday night. And every teammate in the dugout will be there when Rogers returns, perhaps with some sound advice.