ST. LOUIS -- David Eckstein took his mom to dinner at the White House, made a believer of Barry Bonds and got married at Walt Disney World.

Make that a World Series MVP, too.

Call Eckstein lucky or charmed or whatever, the St. Louis Cardinals were glad that baseball's biggest little man was on their side.

"It was unreal out there," he told the roaring crowd Friday night. "We got ourselves a championship."

Eckstein struggled to an 0-for-11 start in the Series. But showing the true spirit of St. Louis, the blond wonder boy came on strong.

He hit three doubles and a single to win Game 4, then singled twice and drove in two runs in Game 5 as St. Louis beat Detroit 4-2 to clinch the title.

Eckstein finished 8-for-22, driving in four runs and scoring three.

"When you suit up in spring training, your main goal is to win a world championship. That's all you play for," he said. "All the little things that you do to get to this situation are well worth it."

When the game ended, he hugged every player in the middle of the diamond -- and got hoisted off the ground by manager Tony La Russa and most of his teammates.

Then it was Eckstein's turn to lift the MVP trophy and get the prize that comes with it: keys to a bright yellow Corvette. When the car was wheeled onto the field, it came to a stop right near the spot where Eckstein plays.

"This is my first car I can call my own from the beginning," he told the fans.

A fairy tale, maybe, and fitting. He married actress Ashley Drane -- she's been on "That '70s Show" and "That's So Raven" -- last November, and their wedding reception featured an Alice in Wonderland theme.

A real-life whirlybird, Eckstein is a perpetual motion machine when comes to the plate. Waving the bat over his head and around his back, he never stops in the on-deck circle.

In the field, he's always moving around, too. And it seems to take every ounce of his energy to make the throw from deep in the hole. 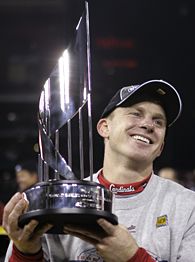 His size -- and 5-7 is being generous -- and enthusiasm can also mask his skills. A two-time All-Star who was waived by Boston in 2000, he's now a two-time Series champion.

"Whenever David is playing, there is absolutely no doubt that our club responds to how hard he plays," La Russa said. "He is a wonderful leader."

"I can remember talking to Don Zimmer a couple of years ago about him," Leyland said before Game 5. "He said, 'You look at him, you can't figure it out.' And then during the course of the game he's in the middle of every single thing."

Eckstein sparked the Anaheim Angels over San Francisco for the 2002 crown and was invited to the White House, where his mom met President Bush. Later, at an awards banquet in New York, Bonds told Eckstein's mother, "You've got a great son."

After the 2004 season, though, the Angels decided they could do better at the plate and in the field than Eckstein.

So in what amounted to a three-team merry-go-round of shortstops, Edgar Renteria went to Boston, Orlando Cabrera moved to the Angels and Eckstein wound up in St. Louis. At the time, there were plenty of other shortstops considered better than Eckstein -- Alex Rodriguez, Derek Jeter, Miguel Tejada and Nomar Garciaparra, among them.

"To me, he's our shortstop," he said during the postgame celebration. "And believe me, he's more than just guts, he's a very good player."

Hobbled for much of this season, Eckstein, 31, was slowed by injuries to his shoulder, hamstring and side. He also had a concussion, and was so worn down that he skipped the Cardinals' off-day workout Monday.

Other teams noticed, too, that he was banged up. Opposing outfielders started moving in against him, cheating a few feet and later taking several steps closer, aware that Eckstein couldn't drive the ball.

A couple of extra inches were all Eckstein needed in Game 4. With the score tied in the eighth inning, he hit a two-out drive that ticked off left fielder Craig Monroe's outstretched glove for a go-ahead double.

"I think they were definitely playing percentages, and that's where I probably would have been playing myself," he said.

The odds have been against Eckstein since he was in youth ball, when coaches began telling him he was too small to play. Eckstein comes from a family with a troubled medical past, with three family members needing kidney transplants. There's been no indication he will need one.

"He's the toughest guy I've ever seen in a uniform," La Russa said.