ST. LOUIS -- There they stood, together, in the middle of a celebrating crowd. They embraced one another as tears streamed down their faces. The blond-haired brothers from Southern California had been through enough tumult this season to last their entire lives.

As Jered Weaver, the younger sibling, held on tight to his older brother and hero, Jeff, he whispered "I love you." Jeff said the same thing back to Jered. And added, "We've been through a lot. I'm glad we got to this point. I'm glad we could both celebrate. I just wish it could be with the same team."

At one point it might have, but this was October, not February, when they both started spring training with the Angels. And earlier this summer Jeff had been essentially replaced by Jered, the up-and-coming phenom, in the Angels' rotation.

And now here Jeff Weaver was, pitching eight incredible innings and guiding the Cardinals to a 4-2 win over the Detroit Tigers, and their 10th World Series title.

The emotion was too much to bear.

"I'm just happy we could celebrate together," said Jeff, who was traded to St. Louis for a minor-leaguer in early July, making the way for Jered to assume his place in the rotation.

Added Jered: "Everybody was asking what it was going to be like at the dinner table at Thanksgiving. And now he's got all the bragging rights." 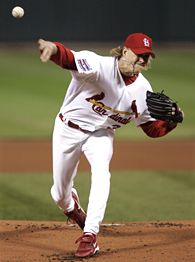 Weaver not only overcame the mild embarrassment of being rejected for his little brother. He also became the starting pitcher with the worst regular-season ERA (5.76) to win a clincher in the World Series. And he did it in style, throwing a personal postseason-high eight innings. As his slider broke and fastball twirled, Weaver left the light-hitting Tigers with little to show; he allowed just two runs, one earned, and struck out nine.

"He pitched marvelously," said Jered, tears still streaming down his 24-year-old face. "God, I love him to death. It's awesome."

When the trophy presentation was complete on the field, Weaver wasted little time, walking into his dugout and back to the clubhouse. As he left the field, teammates followed and clapped behind him, as if they were his personal cheerleaders. Weaver then raised his fists and lanky arms over his head -- as if he were channeling President Nixon -- sending the crowd into delirium.

"Next to his birth, that's probably the greatest thrill I've ever seen," said the father of the Weaver clan, Dave. "The way his year started and what happened, it's just fantastic."

Casey Rowe flew out from Fresno, Calif., for this. He wouldn't miss it. Jeff and Rowe pitched together at Fresno State, and they both were drafted by the Tigers. Rowe's out of baseball now, but he talks to his best friend at a minimum of four times per week, and the two run a real estate company together.

Rowe has seen Weaver at his worst -- with the Yankees when he allowed a walkoff homer in his only World Series appearance -- and at his best, on Friday night in St. Louis. When the final out was recorded, Rowe broke down in tears, so happy for his friend, whom he'd been with through all of Weaver's struggles -- first with Detroit, then the Angels, and now watching Weaver beat the Tigers in the World Series.

"I'm just crying," Rowe said. "The Jeff I know is a headstrong person, and I think it was him kicking himself in the butt to get to where he is right now.

"There are just no words to describe it."

Weaver can become a free agent now, and his family said that St. Louis seemed to be a good fit. Rowe joked that each postseason start his friend made a million dollars. All agreed that Weaver seemed to feel welcomed and respected in St. Louis, and that the stress of his career intertwined with his brother's, was now gone. He went 3-2 with a 2.43 ERA this postseason, and probably pitched himself into a lot of money.

"I think there was a lot of adversity with the Angels, with his brother and with the situation," Dave Weaver said. "He just wasn't comfortable. He battled back from that, going to the Cardinals."

Jeff Weaver had just gotten off a radio telephone interview, in which his hands trembled as he tried to hold onto the cell phone while balancing a bottle of champagne in the other, when he walked back into the clubhouse. Dave had not yet seen his first born, and grabbed him.

"Hey! Were you going to walk past me?" Dave yelled as the two embraced. "I'm so proud of you after the tough year."

Then the two men, their bright blue eyes both stung with champagne and tears, entered the raucous clubhouse party. They embraced more, posed for pictures and poured anything they could over each others' heads. Suddenly, Jeff spotted Jered. The three Weavers stood there, posing for the camera. As the shutter clicked, the remaining friends and family chanted the family name, and laughed, in semi-disbelief that, yes, indeed, they were there, and the World Series was won behind the guy no one believed in.