"I made my arguments and went down in flames. History will prove me right." -- Texas Rangers owner George W. Bush after voting against realignment and a new wild-card system during a Major League Baseball owners meeting in September 1993. Bush was the lone dissenter in a 27-1 vote.

"Time will tell. We believe in our research and that the positives far outweigh the negatives." -- Milwaukee Brewers president and acting commissioner Bud Selig after owners approved the new system 14 years ago.

Judging from their track records on this one, maybe Selig should take a crack at sorting out that nettlesome Iraq situation and the president should forget about baseball and events in Baghdad and turn his attention to health care.

You didn't have to stay up late Monday night to watch Colorado's 9-8 victory over San Diego for confirmation that baseball's wild-card system makes for compelling entertainment. It's apparent from the euphoria in Denver, an NFL hotbed where baseball suddenly is monopolizing the front of the sports pages. 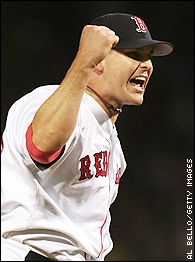 You can see it in Major League Baseball's record 79.5 million attendance this season. That includes a combined increase of about 1.25 million fans in Philadelphia, Denver, San Diego and Milwaukee, cities where teams were playing meaningful games right down to the jubilant and/or bitter end.

And you can tell by baseball's spiraling revenue, which has increased from $1.2 billion to $5.8 billion since owners had the temerity to mess with tradition and introduce realignment, followed by revenue sharing and a luxury tax on big spenders.

Selig, who spent last week watching games at Miller Park and channel-switching at home, called his old pal, former Boston Red Sox CEO John Harrington, and they marveled at the direction the game has taken.

"John said, 'Commissioner, did you ever think when we were designing all this that it could be this good?'" Selig said. "The answer is no. I thought it would be great, and so did John. But are you kidding me?"

Baseball's playoff system is so popular, even Bob Costas is no longer on a soapbox on behalf of purists everywhere. The only people with reason to complain, it seems, are those unfortunate division champions who keep getting sent home prematurely by upstart wild-card clubs.