CHICAGO -- When the Cubs march into Wrigley Field on Tuesday, they will be playing in front of 40,000 ailing fans. Most of these fans suffering from Mets-related heartbreak have but one request: To be able to sing "Go Cubs Go" three times this week. Even if they don't exactly appreciate the song, at least it means the Cubs won that day.

Like all things Cubs, there is a tug of war between traditionalists and modernists when it comes to the team's unofficially official victory song.

Some find it mawkish and old-fashioned, a vestige of the team's corny past. They hate watching Cubs fans holding up W flags as the song plays uninterrupted on TV after wins. Others, like myself, find it endearing and pure, a throwback to the days before irony. Some things don't have to be overanalyzed.

As the Cubs prepare to play their first National League Championship Series home game since Game 7 of the 2003 NLCS, let's take a minute to pay tribute to Steve Goodman, the Chicago folk legend who penned this optimistic song not long before he died of leukemia three decades ago at 36.

Sing along to 'Go Cubs Go' 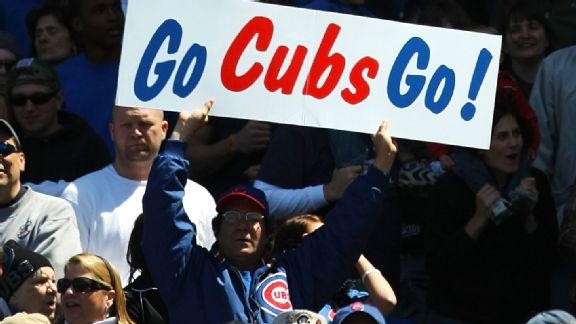 Steve Goodman's words have been heard a lot more often lately at Wrigley Field. If you're going to the ballpark for the first time, or just watching on TV, here's what all those Cubs fans holding the "W" flags are singing:

Baseball season's underway
Well, you better get ready for a brand new day
Hey Chicago, what do you say?
The Cubs are gonna win today

They got the power, they got the speed
To be the best in the National League
Well, this is the year and the Cubs are real
So come on down to Wrigley Field

"Go Cubs Go" is fun to sing. The chorus packs a punch, especially when 40,000 people are belting it out in unison at Wrigley Field. Next to Harry Caray's rendition of "Take Me Out to the Ballgame," it is the most famous song in Cubs history.

When the team started playing it over the PA as a postgame singalong in 2007, then-manager Lou Piniella told reporters, "There are tears in my eyes when they sing." Of course, Piniella called the song, "Go Cubs Win." Miss you, Lou.

But now, in the spirit of change that has swept the organization during its total rebuild, some want it gone, replaced by a fresher jingle or maybe nothing at all.

Really, we should all be thankful a WGN radio executive named Dan Fabian picked a brilliant songwriter like Goodman for a small project that turned into a legacy.

"The song carried on and should continue to carry on," said former WGN Sports Director Chuck Swirsky, who was around for the song's creation and now serves as the voice of the Chicago Bulls. "It really mirrors what Cubs fans are all about, which is joy. Listen to and read the words to Goodman's song. It really embodies what it means to be a Cubs fan."

The meat of the song is the chorus, which is repeated three times: "They're singing: Go Cubs go, go Cubs go/Hey Chicago what do you say?/The Cubs are gonna win today."

It's a songwriting lesson. Catchy as a 4-6-3 double play.

Vulcan-like thinkers argue the Cubs have already won when the song is performed, making it illogical. These are the types of people who correct grammar mistakes on Twitter and are avoided at bars.

Let's be clear: "Go Cubs Go" is hardly the folk singer's best critical work. That would be "The City of New Orleans," which was famously performed by Arlo Guthrie. It's not even his best Cubs song. That would be the mordantly clever, "A Dying Cub Fan's Last Request." Even his jaunty remake of a classic song, renamed "When the Cubs Go Marching In," is a lot of fun.

For what amounts to a radio jingle, "Go Cubs Go" is incredibly well-constructed and effective at making Cubs fans croon. It has had staying power and is now associated with several different eras of Cubs baseball. It's as if the "Super Bowl Shuffle" were written by a truly great songwriter.

"I think a song gathers its power by context," WXRT deejay Lin Brehmer told me. " 'Go Cubs Go' is really just a commercial jingle for the Cubs. It's simple the way jingles are. Any kid or over-served adult can sing it. When the Cubs were losing close to a hundred games a year, it just sounded insipid. When the Cubs came out of nowhere to win 97 games, it sounded majestic."

Just after the Cubs clinched a spot in the NLCS last week, a Chicagoan recorded what a stadium singing "Go Cubs Go" sounds like from a mile away.

How "Go Cubs Go" came about is a familiar story in Chicago, but one worth regular retelling. In the 1970s, Goodman, a north suburban Chicago native and lifelong Cubs fan, was "the central figure in Chicago's Old Town folk scene," Brehmer said, playing at famous haunts like the Earl of Old Town. He eventually moved to Los Angeles with his wife, Nancy, and his kids, but he remained obsessed with his hometown team.

In 1980, he wrote a song for a one-hour WMAQ-TV special on Dave Kingman. The song sympathized with the volatile, moody slugger.

Goodman was a popular guest on Roy Leonard's old WGN radio show. It was an appearance on that show that led Fabian, the longtime program director for WGN, to enlist him in creating a new Cubs jingle for the team's flagship station.

Goodman had already written "A Dying Cub Fan's Last Request," which he debuted at a 1981 concert at the Park West theater in Lincoln Park. When he played it on Leonard's show two days later, the seven-minute song lit up the phone lines, according to the biography "Steve Goodman: Facing the Music," by Clay Eals. "This program will never be the same," Leonard said, according to the book. "That's a gem, Steve." The fan reaction convinced Goodman to record the song and release it as a single.

The "talking blues" song was written in the voice of an older man, but Goodman's friends and family knew it meant something more because Goodman had been fighting leukemia since 1969. He performed the song only once in Wrigley Field, during a 1981 interview with local newscaster Bob Sirott that was taped during the baseball strike, according to Eals' book.

The song caught on in Chicago, with one notable exception.

Green didn't like "A Dying Cub Fan's Last Request" because it amplified the folksy nature of losing at Wrigley Field. That dissent played a small part in selecting Goodman to write a new song, as Fabian thought it would be funny to tweak Green a little along the way.

"He thought it was absolutely the epitome of everything wrong with Cubdom," Fabian said. "It was our way of winking at him. He was good-natured about it. He winked back."

As it turned out, Green loved the new, upbeat song.

After the WGN offer was made, it took Goodman less than a week to write it.

Weeks later, he recorded in a "festive" WGN studio party. Several Cubs were brought in to help sing, including Keith Moreland, who was poked in "A Dying Cubs Fan's Last Request" with the lyric: "Have Keith Moreland drop a routine fly."

Swirsky remembers hearing the final product as Fabian brought in reels of tape to the production room. Swirsky, taken with the memory, began singing the song to me on the phone. What was his reaction then?

"He really wasn't an ego tripper," Fabian said. "But he told me, 'This is going to be a bleacher anthem.' " 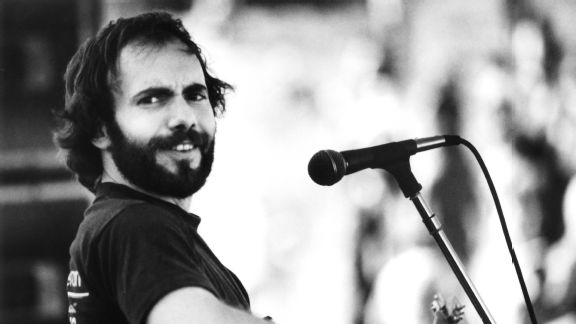 Here are a few of our favorite Cubs songs -- including three Steve Goodman classics, featuring a must-see performance of "A Dying Cub Fan's Last Request" with Wrigley Field in the background:

• Steve Goodman -- "When the Cubs Go Marching In" [Watch]

WGN used it as pre- and postgame music for years before eventually replacing it with other popular songs. The song lingered around, but, according to a USA Today story, it was when the Cubs played it at their fan convention before the 2007 season that the team's marketing brass noticed the excited fan reaction and adopted it.

In his biography of Goodman, Eals wrote, "Yet for all its exuberance, the song was merely the alter ego of 'Dying Cub Fan,' which in its fatalism was as devoted and affectionate as 'Go, Cubs, Go' was in its blind faith."

Fans continue to stay in their seats and sing after wins, but will it last?

"Go Cubs Go" famously contains the words, "You can catch it all on WGN." With that in mind, some wonder if the Cubs will phase out the song during broadcasts. Cubs baseball moved from WGN to WBBM this season, and while WGN-TV kept some games in a restructured deal that goes through 2019, the team will eventually shift all their games to a cable station.

Earlier this season, the Chicago Tribune ran a column that called for a new song and accepted requests. A group called Jumpsuit won with a perfectly fine song, "Cubs Win," a brassy party song that had absolutely no chance of overtaking "Go Cubs Go."

"The original submissions, like the countless Cub tribute songs I receive, were not so good," Brehmer wrote me.

It's not easy to replace a legend.

While the Cubs motored into the 20th century this season with video boards, they don't plan on ditching the past just yet. After all, even in a season where winning became a resurgent tradition, nostalgia still drives fans by the busloads to Wrigley Field. There is something aspirational about watching people sing it on TV.

"You may recall the Tribune ran a story last year suggesting it was time to shelve the song and tried to do a contest for a new song," Cubs spokesman Julian Green wrote in an email. "Cubs fans were pretty vocal that they wanted no part of that talk."

The romance of the Cubs has inspired other songs. Pearl Jam's Eddie Vedder came up with the bar singalong, "All the Way" in 2007. Vedder told ESPN Chicago 1000 AM last week he occasionally writes potential Cubs lyrics in the margins of his scoresheet during games.

This season, songwriter Katie Day penned "By the Lakeside." It's a fine song, but it doesn't have the magic of Goodman's ode to his favorite team.

Goodman died on Sept. 20, 1984. He missed the joy and the heartbreak of that season's end, and those that came after it, but his creation continues to personify and inspire Cubs fans to this day. Goodman's name hasn't been forgotten either. In August 2010, President Obama signed a law renaming a post office a half-mile north of Wrigley Field after him.

"After [Goodman] passed, Roy Leonard told me Steve Goodman's legacy will live forever by his words," Swirsky said. "It's true, especially by the Cubs."