WINTER HAVEN, Fla. -- They scored more runs than the Red Sox. They pounded more extra-base hits than the Yankees. Their starting pitchers threw more innings, and had a better strikeout-walk ratio, than that vaunted rotation in Detroit.

And they outscored their opponents by 88 runs -- a bigger margin than what four of the eight playoff teams, including the the World Series champion Cardinals, and two 90-win teams registered.

There is only one question really worth asking about the team that did all this, the Cleveland Indians: 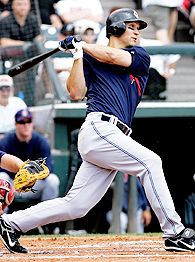 How the heck did they ever have a losing record (78-84) last season?

"I'll tell you what," says their biggest bopper, Hafner. "It's really tough to put your finger on what happened."

But the men who run this team -- ever-astute general manager Mark Shapiro and his creative assistant, Chris Antonetti -- are guys who don't let any mysteries go unstudied or unsolved. And they've done their best to fix what was broken.

So if you're going to pick one American League team with a chance to go from a losing record last year to a long ride through October this year, the Indians have to be that team. It's basic logic.

"We weren't really that bad last year," Shapiro says. "We just had a year where one area of our team [the bullpen] was so disastrously bad, it undermined our core of young talent and other components of our team that competed on a championship level."

Well, it may not all have been the bullpen's fault. But it was, in fact, almost that simple. So here are five reasons the pieces are in place for the Indians to be this year's Detroit Tigers:

1. The law of averages
Start with this: What happened to this team last year can't possibly happen again, if only because it was practically impossible in the first place.

There's an old saying in baseball -- that you're only as good as your record.

But not in the Indians' case.

How hard is it to outscore your opponents by 88 runs and still have a losing record?

Well, no other team in history had ever done it. So we wondered what a "normal" team's record would have been in a season like that. We found 11 other teams in the last decade that outscored the opposition by 85-100 runs. They averaged 93 wins.

"It was a strange year," Hafner says. "We could lose 4-2 and 5-2, and then win 12-1 with the best of them.  But you know those games where you'd make a couple of errors and leave some guys on base, and then you'd still come back and win and you'd say, 'We had no business winning that game?' We didn't have many of those games. And that was the difference between last year and two years ago."

That's also the difference that shows up in the record, not in the calculations. So even though we're pretty sure the Indians won't be allowed to play this year's schedule on their calculators, it would be off-the-charts unheard of for them to underperform their talent level by that humongous a margin again this year.

"I hope so," Shapiro says. "But we can't rest on that in this job. We've got to keep trying to get better. And I think we have."

2. The law of bullpen averages
How bad was this team's bullpen last season?

"We weren't just bad," Shapiro says. "We were historically bad."

But the Indians did sign the only reliever with more than 10 saves last year to change teams: Joe Borowski. They also signed Roberto Hernandez and left-hander Aaron Fultz. And for a few weeks there, they also thought they'd reeled in Keith Foulke, who would have given them another late-inning option if he hadn't U-turned and retired before camp opened.

So are they significantly better? Well, Borowski is no Mariano Rivera clone, and he did "fail" a physical in Philadelphia over the winter. But he is fearless. Hernandez, meanwhile, is 42 years old, but he's coming off his two best seasons in a decade. And Fultz has had an ERA over 4.50 in six of his seven big league seasons, but he was tremendous two years ago in Philadelphia.

At the very least, those additions buy the Indians' young arms more time. And whatever happens, the law of bullpen averages is in this team's favor, because just about nobody's bullpen is ever what you think it will be, or what it was the year before.

"Until we play games and we close them out, I'm always going to have a sense of anxiety about this," Shapiro admits, "just because of what we've been through the last three years: From bad bullpen [in 2004] to the best in the league [in 2005] to horrific bullpen [last season].  So I'm confident our bullpen will be better. It's just a matter of how much better."

And he's exactly right. If you aspire to be a realist, you should know that recent history is full of examples of "teams on the rise" that mysteriously had "one of those years."

Or maybe the best example is a team that Tigers manager Jim Leyland said last year's Indians reminded him of: Leyland's own 1989 Pirates.

His '88 team had battled the Mets into mid-September. Then the '89 team disintegrated into a 74-game winner. But that was just a glitch in the progress of a club that was about to win three straight division titles. Leyland told Wedge himself he could see these Indians following the same script.

"You know, there are things you have to go through to become the team you're going to be," Wedge says. "And I think last year was part of that."

4. The defense department
It wasn't as if the bullpen was the only culprit in this team's demise last season. Infield defense was the coconspirator, on a club that ranked next-to-last in the AL in fielding percentage and allowed the most unearned runs (84) in the whole sport.

But this season, the often-spectacular Andy Marte will be the third baseman from day one, and he's a clear defensive upgrade from last year's Opening Day third baseman, Aaron Boone.

Ditto for the new second baseman, ex-Padre Josh Barfield. And shortstop Jhonny Peralta came to camp "on a mission," Shapiro says, to prove he's the player he appeared to be two years ago, and not the all-around disappointment he was last season.

"He doesn't need to reinvent himself," the GM says. "He just needs to be closer to the guy he was in '05. And this spring, he's been among the bright spots on our entire team."

This is a team with only one strikeout pitcher (C.C. Sabathia) in the rotation, and a catcher (Victor Martinez) who threw out just 16 of 116 base stealers last year. So if this group does play better defense, as expected, that's more than just a bonus. It's a necessity.

5. Follow the leader
Not all of a team's problems show up in the numbers. And the 2006 Indians were no different. They were, in some ways, victims of their own expectations.

"I think we came out of spring training, and there was so much emphasis on Game 1, the first series, the first month, instead of just respecting the length of the season," Wedge says. "And I think a lot of that comes from expectations, instead of going out and just playing."

When the powers that be analyzed what happened to this team, one quality they decided it lacked was players who had been part of clubs that handled those expectations. So when the Indians went out this winter and signed Trot Nixon and David Dellucci, it wasn't just for them to be platoon outfielders, but also voices of veteran wisdom.

"When we look at the variables of free agents and slot guys," Shapiro says, "we also give a premium to the fact that a lot of these guys have championship rings, or have been through a lot of battles that our other guys haven't. We felt that surrounding that championship experience, that stability, that wisdom around our players would help our guys get better. It's wisdom. It really is. And it takes wisdom to handle those 162 games."

Dellucci admits that Shapiro talked to him from the beginning about dispensing that wisdom. But when he looks at mega-talents such as Hafner and Sizemore, he says: "These guys are ready to be superstars. So it's not my role to stand up and give speeches. They don't need that. I just think that, as we get into September, they might have questions for guys who have been there."

They might not need much more than answers to those questions to win, too. This team already has the best leadoff man in baseball in Sizemore. And it has a middle-of-the-order masher in Hafner, who leads the entire American League in on-base percentage (.419) and OPS (1.030) over the last three seasons.

It also has a certifiable ace in Sabathia, fronting a rotation that led the league in complete games and was part of more shutouts (13) than any team in baseball except the Tigers.

In other news, the Indians are probably the deepest team in the league. And their system is loaded with prospects -- headed by ace-of-the-near-future Adam Miller. So the future is as bright as the present.

But it's that present they're concerned with at the moment. And while nothing is safe to assume in the toughest division in baseball, all assessments of these Indians should still begin with a reflection on the 2006 Indians:

There's no way they can do that again.