BALTIMORE (AP) -- If anyone needed any further proof that Nomar Garciaparra's wrist injury is no longer a problem, his past two
games have provided more than enough evidence. 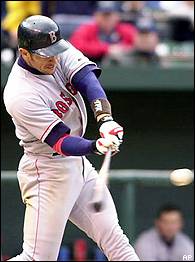 Garciaparra's second homer in two games, a three-run drive in
the eighth inning, ruined a fine pitching performance by Scott Erickson and lifted the Boston Red Sox past the Baltimore Orioles
4-2 Saturday.

After missing all but 21 games of the 2001 season with
tendinitis in his right wrist, Garciaparra appears eager to make up
for lost time. He hit his first homer since Aug. 16 on Friday
night, then added another Saturday.

The shortstop is hitting .357 and leads Boston with five RBI --
only three fewer than he had last season.

Is Nomar really back to where he was before the injury?

"I think we knew that before, but this might put a cap on it,"
Red Sox manager Grady Little said.

Garciaparra has no doubt about it.

"Coming out of spring, I was more worried about my timing and
my baseball, rather than worrying about what I have to do for my
wrist," he said. "I feel comfortable, and I feel I'm definitely
back to where I want to be."

Erickson (1-1) blanked the Red Sox through six innings and
allowed one run through seven. But with the score tied at 1, the
right-hander ran into trouble in the eighth after retiring the
first two batters.

Rickey Henderson got his first hit with Boston, a single on an
0-2 pitch, then took off for second with Johnny Damon swinging on
the pitch. The ball rolled through the hole vacated by Baltimore
second baseman Jerry Hairston, who went to cover the bag.

Garciaparra followed with a liner to deep left that was gloved
by a leaping Melvin Mora, but the ball fell into the seats after
his mitt hit the top of the 7-foot wall.

"I catch it, but when I hit the wall my hand opened," Mora
said. "I feel the ball in my glove, but then I hit my wrist on the
wall. I think that's why I let go of the ball."

It was the fourth straight defeat for the Orioles, who have
scored only three runs during the skid. Jay Gibbons and Mike
Bordick homered for Baltimore, which was limited to two runs and
six hits in the first two games of the series.

Casey Fossum (1-0) pitched two innings, allowing Bordick's solo
homer in the eighth, and Ugueth Urbina worked the ninth for his
second save.

Boston starter Frank Castillo pitched six innings, permitting
only two batters to reach base -- Gibbons and Chris Singleton, who
walked in the fourth.

With the thermometer at 46 degrees and a wind swirling around
the ballpark, Erickson defied the elements by pitching without a
long-sleeved shirt under his jersey.

For six innings he managed to put a chill on the Boston lineup,
allowing only two hits and retiring 13 straight batters from the
second inning through the sixth.

But Garciaparra led off the seventh with a single and took third
on a single by Manny Ramirez. Erickson then struck out Brian
Daubach, but Shea Hillenbrand hit a sacrifice fly to make it 1-1.

It was the first earned run against Erickson in 13 innings this
season.

It got much worse in the eighth.

"I had Rickey at 0-2 and should have gotten him out," Erickson
said. "I had a feeling he was looking for a slider, and I threw
one anyway. Then I threw a slider right down the middle to
Garciaparra, the last guy you want to let beat you.

"I was mowing them down. I just basically choked."

Much earlier, singles by Daubach and Trot Nixon gave the Red Sox
a chance to break on top with two outs in the second. But Erickson
responded by retiring Doug Mirabelli on a routine grounder.

Castillo retired the first six batters before Gibbons led off
the third inning with a drive that landed in the front row of the
right-field seats, giving the Orioles their first lead since
Opening Day.

Game notes
Batting leadoff as the designated hitter, Henderson went
1-for-4 with two strikeouts in his first start with Boston. ... The
game marked the 10th anniversary of Camden Yards, which opened
April 6, 1992, with Baltimore blanking Cleveland 2-0. ... The Red
Sox have outhomered their opponents 7-2 over three games. ...
Baltimore's Jeff Conine went 1-for-4 and is 2-for-18 this year.