MIAMI (AP) -- Florida's Ryan Dempster waited for just the right
moment, then sneaked up behind teammate Josh Beckett during a
postgame television interview and shoved shaving cream into his
face. 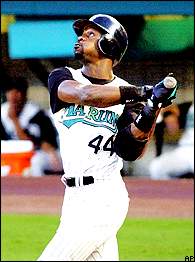 Welcome to the big leagues.

"That's a waste of shaving cream," Preston Wilson said. "He
can't even shave yet."

Maybe not. But he sure can pitch. In a memorable major league
debut, Beckett allowed one hit in six shutout innings as the
Florida Marlins beat the Chicago Cubs 8-1 Tuesday night.

The 21-year-old right-hander also doubled and scored as Florida
won for the just the fifth time in 22 games.

"This was definitely a good start," said Beckett, the second
overall pick in the 1999 amateur draft. "It was fun. I'm ready for
my next one. ... It's just a little surreal right now. It's going
to take a little while to sink in. It's cool. It really is."

Wilson had a three-run homer and Kevin Millar hit his second
career grand slam, providing plenty of run support for Beckett
(1-0). He struck out five and walked three.

Beckett signed a $7 million deal with the Marlins, then
predicted he would pitch in the 2001 All-Star Game. Maybe he could
have, but the organization didn't want to take any chances with his
talented arm -- especially after shoulder tendinitis put him on the
disabled list twice last season.

He started this season in Class-A Brevard County, pitching in
warm weather through the spring. He dominated the Florida State
League, then did the same thing at Double-A Portland.

"He has some good stuff," Chicago's Rondell White said. "He
pitched great tonight. Give him credit. I think he'll be around for
a while."

"If you get eight runs, I don't care who you have -- whether
it's a veteran or a rookie," Baylor said. "He threw some pitches
to hit. We didn't hit."

Sosa was 0-for-3 against Beckett and finished the night 0-for-4.
Having homered in nine consecutive series, Sosa will need to hit
one Wednesday to keep his streak alive.

White had the Cubs' only hit off Beckett, a second-inning
single. Fred McGriff was the only player to reach second base
against him, getting there on consecutive walks in the fourth.

But Beckett got Ricky Gutierrez to fly out, then retired the
side in order in the fifth. He walked Delino DeShields on four
pitches to start the sixth, but struck out two of the next three
batters and got a standing ovation as he walked off the field.

The crowd didn't realize he had been removed from the game until
Eric Owens pinch-hit for Beckett in the bottom of the inning. Owens
was booed loudly before striking out.

"For his first time, you have to like what you saw out there. I
did," said Marlins manager Tony Perez, who pulled Beckett after he
neared his 90-pitch limit. Beckett threw 85 pitches, 54 for
strikes.

Wilson hit his 18th homer of the season in the first inning off
Jon Lieber (17-6), scoring Derrek Lee and Cliff Floyd. Lieber
allowed seven hits and a season-high eight runs in five innings.

Beckett made it 4-0 in the fifth when he led off with a bloop
double down the right-field line and scored on Lee's sacrifice fly.
The Marlins, who added four more runs in the fifth on Millar's
slam, got a brief scare when Beckett slid awkwardly into second
base and came up shaking his pitching hand.

"That was a bad slide. It's going to be on bloopers one of
these," said Beckett, who was fine after the play.

Millar finished 3-for-4, a double shy of hitting for the cycle.
He extended his hitting streak to nine games with a first-inning
triple. It was his third triple of the season.

But Millar's night was overshadowed by Beckett's debut.

"He was in control. Nothing bothers him," Perez said. "He
knows what he's doing. He knows how to pitch. He looked like he's
been here a long time. He looked like a veteran."

Except for the shaving cream.

Game notes
The Cubs lost for third time in 10 games and fell four
games behind Houston in the NL Central. ... Floyd snapped an
0-for-23 slump in the fifth inning. ... Florida 3B Mike Lowell was
back in the lineup after missing a game for the birth of his first
child. The Lowells welcomed Alexis Ileana, a 7-pound, 15-ounce girl
Monday.