BALTIMORE (AP) -- His thumb bleeding because of an annoying
blister, Derek Lowe gamely went to the mound, seeking to put the
finishing touches on the finest performance of his career. 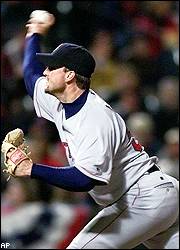 His place in baseball history was ultimately denied by a 60-foot
infield hit.

Lowe fell six outs short of a no-hitter Friday night, leaving
after Tony Batista beat out a roller down the third-base line in
Boston's 3-0 victory over the Baltimore Orioles.

"Obviously you know what's going on. You can't deny that,"
Lowe said. "But it was a hit. What can you do?"

A former closer making just the 23rd start of his career, Lowe
walked Jay Gibbons opening the eighth. Batista then topped a ball
down the line that third baseman Shea Hillenbrand decided to grab
instead of allowing to roll any farther.

But his throw was too late to nail Batista at first, and Lowe
shrugged his shoulders as the crowd of 31,261 at Camden Yards let
out a collective groan.

"There were no second thoughts at all. I thought it was going
to be fair the whole way," Hillenbrand said. "I'd rather try to
make the play and get the out."

With the no-hitter gone, Lowe was replaced by Rich Garces, who
completed the eighth inning. Ugueth Urbina pitched the ninth,
allowing one hit in earning his first save and securing Grady
Little's first win as a major league manager.

"It was big. It's always good to get the first win of the
season under your belt," Little said. "We couldn't do it in a
finer fashion that we did tonight."

It was the second time in three games that Baltimore was shut
out. After scoring 10 runs in the opener, the Orioles have scored
one run in their last three games.

But at least they weren't no-hit. Lowe (1-0) was seeking to
duplicate the performance of Hideo Nomo, who threw a no-hitter in
Baltimore last year in Boston's second game.

The right-hander was disappointed to lose the no-hitter, but
delighted with his stint after going 5-10 last year.

"It's what I worked for all offseason. I put in a lot of time
and effort to prepare myself to go out there and have success," he
said. "I know it's only one start, but it's the best one I've ever
had. Hopefully it's something where I can steadily get better every
time out."

Lowe would have been one of the more unlikely pitchers to throw
a no-hitter -- he never before pitched a complete game and entered
with a 20-32 career record. He allowed three walks and struck out
one.

And, of course, there was that one hit.

"I knew it was going to stay fair. I ran as hard as I could,"
Batista said. "I never broke up a no-hitter before. I'm glad I
did."

There were two close calls before Batista's hit. With Mike
Bordick batting in the third inning, shortstop Nomar Garciaparra
grabbed a grounder deep in the hole and threw wide to first, but
Tony Clark made a sweeping tag.

In the fourth, second baseman Rey Sanchez grabbed Chris
Singleton's grounder up the behind the bag, turned and threw out
the runner by a step.

The Red Sox got all the offense they needed in the first inning,
when Johnny Damon hit the fourth pitch from Josh Towers (0-1) over
the right-field scoreboard, his 11th career homer to start a game.

Boston made it 3-0 in the fifth. With two outs, Damon singled,
stole second and scored on a bloop single by Garciaparra.

Lowe retired the first 12 batters -- nine on grounders -- before
Jeff Conine led off the fifth by reaching on a throwing error by
Hillenbrand. Gibbons then hit into a 6-4-3 double play, and Batista
grounded out.

Lowe walked Melvin Mora and Brook Fordyce to open the sixth,
then retired Bordick on a foul pop before Jerry Hairston grounded
into a double play.

Game notes
Gary Williams, coach of Maryland's national championship
basketball team, and senior guard Juan Dixon both threw out a
ceremonial first pitch. ... Damon's homer was his first to start a
game since May 26, 2000, against Anaheim while playing for Kansas
City. ... Rickey Henderson will get his first start with Boston on
Saturday, Little said.