BALTIMORE (AP) -- First, Pedro Martinez turned in a performance
that proved his shoulder is not a cause for concern. 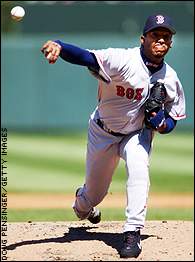 Then he hammered home the point.

"I hope that everyone chills now. I'm not 100 percent strong
yet, but I'll get there," he declared.

Martinez won for the first time since last May 30, rebounding
from an awful Opening Day stint to pitch six strong innings Sunday
and lead the Boston Red Sox over the Baltimore Orioles 4-1.

Martinez (1-0), coming off a season shortened to 18 starts by
shoulder pain, allowed one unearned run and three hits, struck out
five and walked one. Shea Hillenbrand backed him with a pair of
two-run homers.

So much for the idea that Martinez is dragging a sore shoulder
to the mound.

Although he was pitching against a team in a horrid hitting
slump, it was a vast improvement from Martinez's first outing, when
the right-hander gave up seven earned runs and nine hits in three
innings against Toronto.

"The reports we were getting was that his fastball was not as
explosive as it had been," Orioles manager Mike Hargrove said.
"Obviously, he had a real good fastball today."

The three-time Cy Young Award winner allowed only one runner
past second base and retired his final seven batters. Martinez
threw 85 pitches, 54 for strikes, in lowering his ERA from 21.00 to
7.00.

"I'm pretty pleased with how everything went. I made some
adjustments today and felt like I was more consistent with
everything," he said. "I felt better. Now I'll just continue to
work on everything."

Martinez had been winless in his previous eight starts since
beating the New York Yankees 3-0. That was the night he brought up
the famous curse against the Red Sox, saying "Wake up the Bambino.
Maybe I'll drill him in the (behind)."

Boston hasn't won the World Series since 1918, and some
attribute the absence of a title to the team's sale of Babe Ruth to
the Yankees in 1920.

Carlos Baerga had two hits for the Red Sox, who outscored
Baltimore 11-3 in a three-game sweep. Ugueth Urbina pitched the
ninth to earn his third save, all in this series.

Baltimore has lost five straight, scoring only four runs during
that span.

"We're six games into the season. There's no reason to panic,"
Hargrove said. "We swung our bats well against Martinez, who is
arguably the best pitcher in the league."

Even if shoulder isn't in peak form.

"He's continuing his progress," Boston manager Grady Little
said. "We were pleased with the way he threw the ball. He was much
more consistent. His velocity is increasing. Today he got good
results; that should make him feel better about everything."

The Red Sox got all the runs they needed in the second inning.
Two outs after Manny Ramirez drew a leadoff walk from Calvin Maduro
(0-1), Hillenbrand hit a liner into the left-field seats for a 2-0
lead.

Hillenbrand struck again in the fourth, following a double by
Tony Clark with another drive that easily cleared the left-field
wall. It was the first career multihomer game for the second-year
player.

But Hillenbrand knew this one was about Martinez.

"He's the person we need, no doubt about it," he said. "A lot
of great things happen when you've got guys like that. It's awesome
right now to be part of this team."

The Orioles closed to 4-1 in their half. Jeff Conine doubled and
scored when Hillenbrand threw a bouncer to first base after
fielding a slow-roller off the bat of Jay Gibbons, who had half of
Baltimore's six hits.

Maduro, activated from the disabled list before the game,
yielded four runs and five hits in four innings. Rodrigo Lopez
blanked Boston over the next four innings.

Game notes
Baltimore has gone 45 straight innings without scoring more
than one run in an inning. ... Hillenbrand is 4-for-8 lifetime
against Maduro. ... The Orioles sent RHP Rick Bauer to Triple-A
Rochester to clear room for Maduro on the 25-man roster. ...
Martinez is 4-1 with a 1.99 ERA lifetime against Baltimore. ... The
top two hitters in the Baltimore lineup, Jerry Hairston and Chris
Singleton, are a combined 5-for-48 this season.